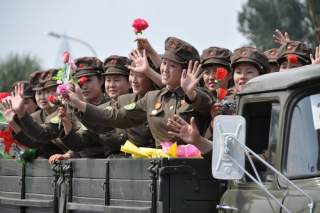 It’s no secret that China-North Korea relations are extremely strained these days.

In recent months, China’s tolerance of Pyongyang has seemed to reach its limit. Increasingly, state media outlets in China have been running negative stories about North Korea, such as the recent killing of Chinese residents by North Korean military defectors and illegal drug smuggling and spying activities by North Korean agents. Meanwhile, North Korea’s young leader, Kim Jong-un has long sought an official trip to Beijing. Thus far, China has rebuffed his repeated requests reportedly because Chinese President Xi Jinping has been annoyed by North Korea’s recent reckless policies and wants to teach it a lesson.

Indeed, within China there has been an increasingly fierce debate about how to deal with North Korea. The debate has mostly been limited to retired generals, scholars, and independent analysts, but its potential impact on China’s North Korea policy should not be underestimated. A closer look at these debates reveal three main positions: support North Korea, abandon it, or pressure it.

On the other hand, a small group of Chinese analysts have advocated abandoning North Korea in recent years, causing fierce debates within scholarly circles. In support of their position, this camp argues that North Korea is of decreasing strategic value to China as a buffer zone, and has a bad international reputation; inherently hostile attitude toward China; and aggressive foreign policy.

In recent years, the pressure camp has become increasingly vocal within China. According to analysts within this camp, China should no longer unconditionally support North Korea and tolerate its reckless and aggressive actions because these hurt Beijing’s core national interests. Especially notable is Wang Hongguang, the former deputy commander of the Nanjing Military Area Command of the People’s Liberation Army, who wrote a piece challenging some deeply held convictions about Sino-North Korean relations. Wang also argued that China would not be able to save North Korea if the regime collapses, and that Beijing should not fight for North Korea like it did during the Korean War. Although there is no evidence that Wang’s remarks reflect the thinking of the Chinese government, there is no doubt that the latter’s tolerance of such relatively radical views is meant to send a strong message to North Korean leaders.

All available evidence suggests the pressure camp currently has the upper hand within the Chinese government. Neither the old unconditional support approach nor the abandon approach is realistic. China is unlikely to abandon North Korea completely because Pyongyang continues to hold strategic value for Beijing. At the same time, China— especially under Xi’s strong leadership— has clearly had enough of North Korea blackmailing it.

Using the pressure approach, China’s short-term goal is to persuade North Korea to suspend nuclear testing and return to six-party talks. Over the medium-to-long-term, Beijing will probably push North Korean leaders to denuclearize and adopt a reform agenda.

That being said, whether the pressure approach proves successful is not only dependent on China but also the United States. That’s because North Korean leaders do not believe a frosty relationship with China threatens their survival. They do, however, fear that America’s perceived malign intentions could threaten their survival. As a result, the ultimate solution to the North Korea problem probably lies in the hands of the U.S., not China. This is a crucial point for U.S. policymakers must understand.

Meanwhile, China can help by putting more pressure on North Korea. China should send a clear message to North Korean leaders: reform or collapse. Following the Chinese model of reform and opening, North Korea should first abandon its nuclear program and focus its attention on domestic economic construction. As this proceeds, it should gradually establish normal relationships with the U.S. and South Korea. To facilitate such a reform strategy, the U.S., China and other concerned countries should provide a collective security guarantee to North Korea, as well as necessary economic assistance to help North Korea’s peaceful transition toward a normal member of the international community.

For North Korea, it needs to understand that its nuclear bluff strategy will no longer work with regard to China and the U.S. North Korea will also no longer be able to blackmail China with its own collapse. While Beijing does not want to see the regime collapse in North Korea, it could ultimately handle such a development. To be sure, some Chinese analysts are still overly worried that North Korea’s collapse would result in a unified Korea that is a strong U.S. ally. This will not happen. Any possible reunification plan must take care of China’s core national interests; otherwise it would only hurt the Korean peninsula’s stability and U.S. interests. And China has adequate capabilities to influence the eventual unification process, thus defending China’s core national interests in Northeast Asia.

In sum, the resolution of the North Korea problem needs to be a collective effort, especially from the U.S. and China. The U.S. needs to provide more “carrots” whereas China needs to provide more “sticks.” This strategy, if successful, would not only be beneficial for Korea but also could help further a new type of great power relations between China and the United States.

Chen Dingding is an assistant professor of Government and Public Administration at the University of Macau, and a weekly columnist at The Diplomat. He can be found on Twitter at @ChenDingding.