Sorry, America: Iran Will Always Be an Enemy 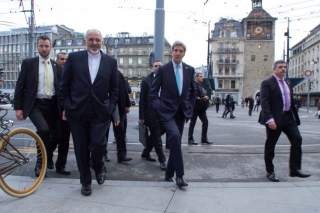 Amid optimism that negotiators can hammer out an acceptable deal over Iran’s nuclear program, many see this as an opportunity for a possible rapprochement with Iran. This optimism is tempting, but a candid review of Iran’s recent behavior exposes this to be an unfortunate misjudgment.

While the headlines are consumed with the atrocities and seeming success of the Islamic State, it is not an existential threat to the United States.  The Islamic State has not only not launched a successful attack in the United States, the only American citizens it has killed to date have been in Syria or Iraq. However, the enduring threat to American interests, allies, and stability in the region, as David Petraeus recently pointed out is Iran, whose proxies have killed hundreds of Americans in numerous countries across the region for decades.

While Iran has never overtly supported al-Qaeda, there is evidence that they have cooperated in areas of mutual interest. Indeed despite the fact that al-Qaeda believes that the Shia faith practiced by the vast majority of Iranians is heretical, al-Qaeda has perhaps curiously never conducted an attack inside of Iran. However, a major difference between the Islamic State and al-Qaeda is the former’s emphasis on sectarianism. Indeed, Abu Musab al-Zarqawi the former leader of its predecessor organization, al-Qaeda in Iraq, was warned by al-Qaeda senior leaders to refrain from its incessant violence against Shias in Iraq. The Islamic State destroyed Shia mosques, executed thousands of its adherents, and threatened to topple the Iranian-backed government. With the blitzkrieg rise of the Islamic State, the United States found a shared enemy with Iran that could provide a common cause around which to build trust and repair the hostile relationship.

Consider the conditions that brought the Islamic State to prominence. It is widely accepted now that the actions of the Iraqi government under the leadership of Nouri al-Maliki alienated its Sunni population. Whereas Sunni leaders worked with the government during the uprising against al-Qaeda in Iraq known as “the Awakening,” they did so with the security guarantee that United States forces would protect them against sectarian violence from Iraq’s Shia militias. However the withdrawal of any meaningful United States military presence in 2011 meant the dissolution of that guarantee.

As American leverage waned, Iranian influence rose. Emboldened by support from Iran, Nouri al-Maliki systematically discriminated against Sunnis, purging the ranks of the Iraqi Security Forces in favor of his loyalists, arbitrarily arresting Sunni tribal and political leaders, and filling the government with Shia political allies. Feeling increasingly marginalized and outright threatened by the Iraqi government, disaffected Sunnis turned to the Islamic State. Whether or not the United States could have maintained more leverage by leaving behind a larger force is debatable, but Iran’s backing certainly enabled Maliki’s sectarian political maneuvers to set the conditions for Iraq’s Sunni population to turn to the Islamic State.

Similarly, the credibility of the United States as a reliable partner has fallen while that of Iran has only increased. Threatened by the forces of the Arab Spring, Bashar al-Assad unleashed a brutal wave of repression that has spiraled into a drawn-out civil war displacing millions, killing hundreds of thousands, and spilling over into neighboring countries. Despite the continued onslaught of a myriad of foreign backed militant opposition groups, Assad remains in power largely due to support from Iran both in blood and treasure. Iran's Revolutionary Guard Corps (IRGC) Generals have been killed on the front lines in both Syria and Iraq. Iran’s premier proxy, Hezbollah, has lost hundreds of fighters on the battlefield. Despite crippling sanctions from the international community, Iran provided billions of dollars to the Assad regime.

In contrast, the United States has matched bold words with weak deeds. The stated policy of regime change was supported by halfhearted attempts to train and equip moderate opposition groups which were subsequently overrun by al-Qaeda’s main affiliate, Jabhat al-Nusra. The flagrant violation of the administration’s declared “red line” over the use of chemical weapons was countered with bumbled domestic political maneuvers leading to an eventual Russian-brokered deal to eliminate weapons stockpiles and dismantle facilities, which still has yet to be completed.

Just a few short months ago, the President held up Yemen as the model of success for its counterterrorism policies. In more than a hundred airstrikes, the United States killed dozens of senior al-Qaeda leaders in Yemen, degrading their regional affiliate al Qaeda in the Arabian Peninsula (AQAP). Despite a transition in political leadership, the United States maintained a positive relationship with the government and continued to invest in equipping and training Yemeni security forces, all with minimal American casualties.

Fast forward to last week and the Iranian-backed Houthi militia expanded well outside of its traditional area of influence in the north to seize the capital and push further southward to the coastal city of Aden, forcing President Abd Rabbuh Mansour Hadi  to flee the city by boat after his residence was bombed. Iranian backing emboldened the Houthis, whose official slogan includes the phrase “Death to America,” the same chant by which Iran’s Supreme Leader Ayatollah Ali Khamenei was greeted by a crowd during a speech just two weeks ago, to launch this unprecedented takeover of Yemen. Iranian military and financial aid  was crucial for the Houthis to successfully stage the recent coup.

The takeover replaces the American friendly regime led by President Hadi with the Iranian-backed anti-American Houthis, prompting one Iranian Parliamentarian to declare that Sana’a was now the fourth Arab capital on its way to join the Iranian-led Islamic revolution.  Meanwhile, the United States has been forced to shutter its embassy in Sana’a and withdraw all military personnel from the country. The Houthi takeover also threatens to drive Sunni tribesmen to join AQAP. The self-portrayal by AQAP as the protectors of the Sunni population will only stoke sectarian violence against the Zaydi Shia Houthis. In yet another front as Iranian influence and credibility gains ground while the United States’ recedes, instability spreads threatening American interests and allies in the region.

This loss of credibility and influence has serious implications for the region. In a recent interview, Saudis reaffirmed that they would consider countering an Iranian nuclear weapon by acquiring one of their own despite the long standing, proven record of the United States’ security guarantee to the Kingdom. A nuclear arms race between regional rivals in the most volatile part of the world is in no one’s interest. The loss of confidence in American leadership no doubt strongly contributed to the recently announced decision by the Arab League to create a force to counter Iranian influence and Islamic extremism. An independent Arab League force has the potential to expand the Saudi-Iranian rivalry across the region and stoke historic tensions between Persians and Arabs.

The recent op-ed by former Ambassador John Bolton advocating for the use of military force to prevent Iran from acquiring nuclear weapons only increases the chances of escalation leading at worst to yet another war in the Middle East and at best further complicating an already complex environment. This path presents a stark contrast to the potential of a mutually acceptable agreement. But even without nuclear weapons denied either by coercion or compromise, Iran will continue to pose the greatest threat to our interests, allies, and influence in the region. Decision makers would do well to remember this when charting the course of policy in combating the Islamic State, ending the Syrian Civil War, and preventing Yemen’s collapse. In this case it seems certain that the enemy of your enemy is still your enemy.

Michael McBride is a former Ranger and Army Infantry Officer with multiple deployments in support of the Global War on Terror. He currently works as a consultant for the United States Government.  The views expressed in this article are those of the author alone.