Sorry, Obama: A Grand Bargain with Iran Was Never Going to Happen 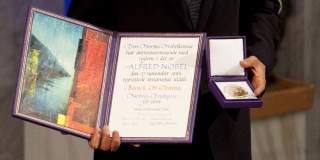 “Negotiation with America is forbidden.” With those words, Iran’s Supreme Leader Ali Khamenei threw cold water on the hope in some circles (and fear in others) that a broader opening in relations with the United States would follow July’s nuclear deal. Officially, the Obama administration has always been skeptical that the deal will lead to reduced regional tensions in other domains—Syria, Yemen, Iraq, and so forth. Yet some reports suggest that there is a current of thought within the administration that views the deal as a kind of master key—that a better U.S.-Iranian relationship will allow coordination in new areas, opening up solutions that may have been impossible. For example, writes the New York Times’ Gardiner Harris, “Administration officials say [Secretary of State John] Kerry is hopeful that once the nuclear accord is solidified, he will be able to begin talking with the Iranians about ending their support for President Bashar al-Assad of Syria.” At the same time, a more vibrant economy may bring changes within Iran that make it less inclined to conflict; more broadly, a new geopolitics may emerge in which the United States will not need to be so solicitous toward its Sunni allies in the Gulf because this more powerful, less nettlesome Iran will balance their influence. There’s a whiff of this on the Iranian side, too, with Iranian foreign minister Mohammad Javad Zarif pushing for a nuclear-weapons-elimination treaty and talks among Muslim nations on Syria and Yemen.

The grand-strategic benefits of such an arrangement purport to be great. A more stable Middle East would enable the United States to focus more of its strategic energies on East Asia. Iranian gas flowing into Europe would reduce dependency on Russia, perhaps forcing Moscow toward more pacific conduct and further enabling that American rebalance to Asia. Barack Obama’s name would be written in history next to Castlereagh, Metternich, Cornwallis, as an heir to a weakened and fading empire who, through astute diplomacy, renewed it for a generation. The Pax Americana would be back. Freed from the need for constant warfare, we’d enter a new golden age, busying ourselves with prosperity and dissipation.

That would all be very nice. Yet it rests on a misreading of what the nuclear deal entails. If Iran were being reintegrated into its region, the optimists would have a good case. Iran’s standing in the Middle East has scarcely changed. Tehran is instead stabilizing its ties to the great powers. This does have benefits, but it does not “solve” the Middle East and thus does not enable the grander transformations described above. Indeed, with Iranian power usually manifesting outside institutional channels, against existing balances and in sectarianizing patterns, it is hard to see how an expanded role for Tehran would stabilize anything.

The Washington Post’s Jackson Diehl lays out one of the challenges: Hezbollah in Lebanon is crucial to Iran’s power-projection into the Levant and the survival of Bashar al-Assad’s regime, and a friendly regime in Syria is crucial to Iran’s ability to keep Hezbollah supplied. A settlement in Syria will thus require the United States to defeat the regime or to effectively ratify the Hezbollah threat. The former is unlikely at current levels of effort and would risk empowering Al Qaeda and the Islamic State group; the latter keeps Israel under the gun and is likely to increase Hezbollah’s overall power.

It’s a similar damned if you do, damned if you don’t story in Iraq. Iran’s efforts there have been crucial to keeping the Islamic State group at bay in the wake of the Iraqi army’s collapse, and Iran certainly has enough influence to insist on its own presence at any meaningful negotiation. Yet that influence has a fundamentally sectarian character, one that all but ensures continuing tension between the government in Baghdad on one side and Sunni populations and regional actors on the other. Again, regional reintegration would require accepting Iranian dominance over much of a major state, with that dominance manifesting in ways that stoke trouble nearby.

There’s also little evidence that Iran is ready to take on a larger regional role. Zarif’s new proposal for Yemen? It’s the same thing he proposed months ago. The nuclear-weapons-elimination pact? A nonstarter for a number of reasons—first among them, eliminating nuclear weapons can only come as a product of reduced tensions among the nuclear powers, not at the say-so of a regional player. Zarif’s nuclear-elimination column contains a curious phrase—“countries outside the [Non-Proliferation Treaty], or Israel”—that betrays a second problem. Does Zarif not see Israel as a country? The Israelis certainly have that perception, and as long as they have large, unfriendly neighbors, they have little reason to give up their nuclear deterrent. Basing a major policy initiative on the notion that they would do otherwise suggests Iran has a quixotic streak unbecoming of a stabilizing power; the alternative reading of this initiative, that it is merely an effort to stir up energy against Israel and the great powers, suggests Iran continues to be opponent of the current order more than a prospective anchor of a plausible new order. And it should go without saying that Iran’s own nuclear program, while hamstrung and unlikely to produce a weapon in the medium term, does not inspire renewed enthusiasm for nonproliferation among its neighbors. Zarif can crow about Israel’s bomb, but that bomb doesn’t challenge the current regional-security arrangements; Iran’s nuclear program, with or without a bomb, does.

And that gets to the fundamental problem: The current regional system was built without Iran—in some cases built in opposition to it, and in some cases simply bypassing it. The system will have to adjust to admit Iran, and Iran will have to adjust to be admitted. But with Iran’s influence having grown enormously over the wreckage of Iraq and Syria, historically regional powers in their own right, adjusting and finding peace may allow Iran to make disproportional gains relative to its neighbors. Iran has effectively bought Iraq and Syria on the cheap as fixer-uppers. They’re enormous security and financial liabilities for Iran right now, and will remain so as long as the neighborhood can’t agree on settling their conflicts. But if that agreement comes through, the value of Tehran’s investment will skyrocket, and they may find themselves looking for new ventures. That’s not to say that we’d see the Islamic Republic moving its capital to the ruins of Ctesiphon and proclaiming the restoration of the Persian empire. A restored Iraq and Syria would not be puppets, as their renewed strength would allow them to pursue their own interests. But Iran could enjoy deeper influence and friendship with both than it has had for centuries. This would be a major alteration of the regional balance, and it would be very unfavorable to countries that have the power to play spoiler. Iran’s growing power would work against it.

And we haven’t even mentioned the role of the United States here, which, for all the talk of grand bargains, would face both internal political constraints and external pressures from its allies in shifting toward Iran. We’re not exactly the best at understanding other countries’ interests, either, and the lack of diplomatic contact with Iran—now apparently amplified by Khamenei’s latest ukase—doesn’t help.

All this means that there are high structural barriers to Iran reentering the regional system. The nuclear agreement only addresses these barriers indirectly—by stopping the economic damage of sanctions and creating the possibility of fuller cooperation with Russia and China, it can eventually make itself stronger. But as long as its neighbors see that strength as fundamentally threatening, it will only be able to make gains using naked force. The Iranians may soon discover the truth of Chesterton’s adage about fascism: used alone, without legitimacy, raw power “is the weakest thing in the world.” In regional geopolitics, the deal is simply not that big of a deal.