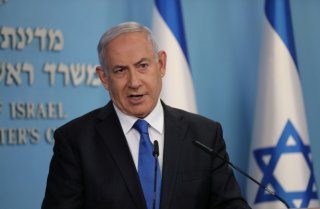 Nearly forty years ago, then-Secretary of State Alexander Haig envisaged creating a “strategic consensus” among Saudi Arabia, Jordan and Israel, as well as Turkey, Pakistan and Saddam Hussein’s Iraq against a common enemy—the Soviet Union. Haig’s plan went nowhere. The Arab states, who were the plan’s fulcrum, continued to abide by the “three no’s” that the Arab League had announced in Khartoum in the immediate aftermath of the 1967 Six-Day War. There would be “no peace with Israel, no recognition of Israel, no negotiations with it.” When Anwar Sadat’s Egypt made peace with Israel in 1979, the Arab League expelled his country.

For decades, especially after the 1993 Oslo Agreement between Israel and the Palestinian Authority, Middle East experts argued that the Arab world would continue to abide by the “three no’s” until there was a final two-state agreement that would return the West Bank, Gaza and East Jerusalem to the Palestinians. There would be no “outside-in” solution as an updated version of Haig’s “consensus” strategy came to be called. This remained the experts’ agreed view even when Egypt was re-admitted to the Arab League in 1989 and when the League took no action against Jordan in 1994 when it signed a peace agreement with Israel in the afterglow of Oslo.

The accepted truth among Middle East experts was that Arab rulers feared that should they make peace with the “Zionist entity” the “street” would rise up against them. However, when the “street” did rebel against its rulers, it was for economic reasons, not because of Palestinian intifadas, or creeping Israeli annexation of the West Bank. The revolts either upended the governments of secular strongmen such as Ben Ali of Tunisia and Ali Abdullah Saleh of Yemen, or else led to civil wars that continue in Yemen and Syria. But they did not displace the Arab monarchies with which Israel had been developing increasing, if clandestine, relations. The “street” in those countries remained quiescent.

Times have changed since Haig’s failed vision of a united front against the Soviets. The early 2000s saw a growing united front between Israel and the Gulf Arabs against Iran, a threat that both perceived as more dangerous and geographically closer than the one-time Moscow bogeyman. The Obama administration’s outreach to Iran furthered the growing Arab-Israeli embrace, as did the Gulf states’ split with Qatar and growing friction with Turkey, both of which supported the Muslim Brotherhood.

Experts who had long focussed on the Israel-Palestinian conflict as the central crisis of the Middle East, as opposed to the Syrian civil war in particular, did not recognize that the Arab League’s 2017 condemnation of Iran’s ally Hezbollah as a terrorist organization marked a sea-change in Arab-Israeli relations. Those obsessed with that conflict simply refused to see that the conditions for an “outside-in” strategy had become far more favorable. Remarkably, given its mishandling of most foreign policy issues, it was the Trump administration, rather than the “experts, ” that first recognized that the Arab street was as much of a chimera as the Arab Spring, and that the Palestinian “cause” was on the verge of being relegated to a Middle Eastern sideshow.

There was little more than Arab pro-forma opposition to American recognition of Israel’s annexation of the Golan Heights. There was equally muted concern voiced by the Arab governments to American recognition of Jerusalem as Israel’s capital. And in both cases, the Arab street, even the Palestinian street,  remained empty.  It remained empty when, despite Palestinian protests, the UAE signed its path-breaking normalization agreement with Israel; when the Arab League refused Palestinian entreaties to condemn the UAE for that agreement; when Saudi Arabia openly permitted an El Al plane to cross its airspace and when Bahrain announced that it would do the same.

It now appears that the strongest support for Palestinian rejectionism emanates not from the Arab world, but rather from Left-wing elements in the West, particularly intellectuals, academics and their student acolytes. Applying the dubious theory of “intersectionality,” their implacable opposition to Israel has led them to target Jewish institutions and harass Jewish students on campus even as Arab states contemplate more open interaction with Israel, if not outright recognition.

The road to a true two-state solution does not run through American and European academe, however.  Palestinian leaders should recognize that times have changed, that they can rely neither on the Arab states nor on the Arab street to force Israeli concessions. If they are truly serious about a state for their people, they should enter serious hard-headed face to face talks with Israel that initially combine a call for both a roll-back of Israeli settlement construction and the end of Palestinian demands for the right of return anywhere inside Israel. Nothing less will do, nothing less will lead to success.