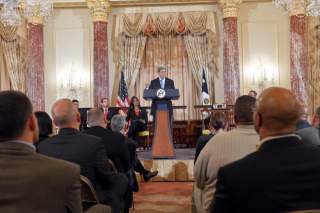 Even before the ink was dry on last fall’s interim nuclear deal with Iran, some members of Congress bemoaned the “naiveté” behind its formulation and predicted that the Iranians would fail to implement its terms. They were wrong then, and they are wrong now in failing to recognize that a strong, final agreement is achievable and far preferable to the alternatives.

Looking back, it is clear that many congressional skeptics of the diplomatic process were wrong about the interim agreement in several ways. First is the question of enrichment. House Intelligence Committee Chair Mike Rogers (R-Mich.) said on Nov. 24, 2013 that: “The only thing that has changed [with the Interim Agreement] is that you have now given [the Iranians] a permission slip to continue enrichment.” This characterization overlooked the fact that the most critical immediate concern at the time was Iran’s continuing enrichment and stockpiling of uranium at a level dangerously close to weapons-grade. The interim deal significantly mitigated this concern by imposing limits on Iran’s most dangerous enrichment activities. And Iran has rolled back its enrichment program in accordance with those limits.

The second myth perpetuated by critics of the Iran talks regards sanctions. House International Relations Committee Chair Ed Royce (R-Calif.) argued last November that “we are the ones doing the dismantling, relieving Iran of the sanctions pressure built up over years.” Eight months later, with the core sanctions still in place and six-power solidarity intact, the pressures on Iran have been maintained and the government in Tehran is working hard to end its political and economic isolation.

Finally, some claimed that the interim deal would make a nuclear-armed Iran more likely. A letter by Senators Graham, Schumer, Menendez, McCain, Casey and Collins warned that the interim agreement could “allow Iran to continue making progress towards [a nuclear-weapons capability] under the cover of negotiations.”

In fact, the exact opposite has happened. Last fall, the trend lines were ominous regarding Iran’s ever-expanding options for breaking out of its nuclear Non-Proliferation Treaty obligations. But as soon as the November 24 “Joint Plan of Action” (JPOA) was initiated in January, the most acute proliferation concerns began to dissipate.

Testifying before congressional committees on July 29, senior officials from the State and Treasury Departments reported that the JPOA terms have been honored by both sides. As a result: Iran was now further from acquiring nuclear weapons than it was last year; monitoring of Iran’s nuclear facilities was more extensive than ever before; in spite of modest sanctions relief, six-power leverage over Iran was intact; and negotiations had made progress toward achieving a comprehensive deal. That deal, according to Undersecretary of State Wendy Sherman, would be “one that cuts off all of Iran’s potential paths to a nuclear weapon.”

Successful implementation of the interim agreement appears to have had little effect on the skeptics. Sen. Menendez pronounced himself “no less skeptical” than he was six months earlier. Sen. Rubio promised that the Iranians will “rope-a-dope” us. Rep. Brad Sherman (D-Calif.) confidently predicted: “We won’t get a good deal.” Rep. Randy Weber (R-Texas) suggested that it was “reasonable to assume that Iran will continue to mislead us…at every step of the way, at every chance they get…”

If critics of the diplomatic process wish to maintain their credibility, they need to confront the facts of the implementation record to date. If they chose to ignore the International Atomic Energy Agency reports that Iran fully met its JPOA commitments and dismiss Iran’s agreement to take additional measures in the next four months that will further distance its enriched-uranium stockpiles from use as nuclear weapons fuel, then their future forecasts should not be given credence.

Under Secretary Sherman made clear last week that difficult negotiations with Iran lie ahead and there is no guarantee a comprehensive agreement can be reached. Moreover, there will continue to be sharp differences of opinion in the U.S. Congress over what kind of outcome is necessary for U.S. security. But as the interim agreement moves into overtime, it’s worth checking the scorecard on whose assessments have been closest to the mark. Keeping in mind the positive results of the talks to date and considering the grim alternatives to diplomacy, there’s every reason to give the negotiators ample running room.

Greg Thielmann is a Senior Fellow at the Arms Control Association. He served more than three decades in the executive and legislative branches of government, specializing in political-military and intelligence issues. Before joining ACA in 2009, he worked for four years as a senior professional staffer of the Senate Select Committee on Intelligence (SSCI). He was previously a U.S. Foreign Service Officer for 25 years, last serving as Director of the Strategic, Proliferation and Military Affairs Office in the Department of State’s Bureau of Intelligence and Research.