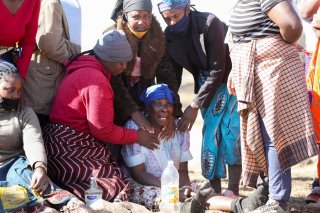 The past three weeks in South Africa have been lawless, even by South African standards. And yet it started so promisingly, with former President Jacob Zuma finally handing himself over to the police on the night of Friday, July 9 on a charge of contempt of court, apparently ending years of lawyerly chicanery which followed years of staggeringly corrupt rule. Scores of followers had followed him to his rural Zululand redoubt, threatening to prevent his arrest by any means necessary. In the end, these threats turned out to be hollow. But his followers had more than hollow threats to offer.

A number of turbulent streams flowed into the river of lawlessness which burst its banks over the past few weeks.

The catalyst is an internal conflict within the African National Congress (ANC), the party which led the anti-apartheid struggle from abroad and has ruled the country since Nelson Mandela won the first democratic election in 1994. Dealt an extremely difficult hand by the country’s unhappy colonial history, the party has struggled to right the massive social wrongs bequeathed it, but could certainly be said, at least until the end of the Thabo Mbeki presidency in December 2007, to be mostly fighting the good fight.

But the cracks in the edifice became apparent when Mbeki was replaced by Jacob Zuma, once Chief of the ANC’s Intelligence Department, by then influential enough to make a successful play for the presidency. Zuma brought with him a new network, made up of the kind of apparatchik who knew more about post-liberation opportunities for enrichment than they did about the dark days of the anti-apartheid struggle. And, significantly, as it turned out, Jacob Zuma was a Zulu.

Contrary to outside perception, South Africa is not seriously divided by so-called tribal politics. But, despite the ANC’s long public and genuine commitment to a one-nation politics, leadership roles have in fact been unevenly divided between the various ethnicities. For most of the ANC’s history Xhosas, such as presidents Mandela and Mbeki, were at the forefront of the organisation. This reflects, more than anything else, the fact that large-scale modern education arrived in the Xhosa territories before it did amongst the Zulu and the other indigenous peoples.

This is not to say that there were no prominent Zulu leaders in the ANC—the obvious examples are John Dube and Albert Luthuli—but, and this is a crucial point, they did not emphasise their Zuluness. Doing so would have contradicted the “national” ethos reflected in the name of the organisation, an ethos defined also as “non-racialism”, which encompassed all South Africans who wished to fight the injustices of apartheid, including white people.

The apartheid government, unsurprisingly, offered temptations to black politicians who were willing to embrace racial and ethnic categories. Hereditary Zulu leadership was long able to play a wily version of this game, whereby traditionally Zulu territory was able to retain a certain degree of autonomy in exchange for distancing itself from the national, cosmopolitan, modernising ANC. Post-apartheid, however, as one might have expected, the most prominent vehicle for Zulu identity, Chief Mangosuthu Buthelezi’s Inkatha movement, a rural-based expression of traditional culture, struggled to retain its momentum. Ethnic chauvinism looked, for a while, like a spent force. Until, that is, the Zuma presidency.

Jacob Zuma, had, both before and while president, taken the trouble to convince Zulus that traditional Zulu culture, including recognition of the king, could be combined with ANC ideology, and this, ironically, played a part in both making peace with, and then superseding, Inkatha. He also assiduously constructed networks of patronage rooted largely, but not exclusively, in the Zulu community.

The remaining strength of the ANC’s inclusive legacy has, however, meant that despite Zuma’s skilful instrumentalization of Zulu identity, the current turmoil cannot be understood as ethnic conflict. It is true that the vast majority of the supporters of his faction are Zulus, but it is not true that the vast majority of Zulus are supporters of his faction. And at the higher levels, his network knows no ethnicity.

The line between patronage and corruption is a fine one, and a national judicial commission, appointed, ironically, by Zuma himself during his time in office, is currently investigating just where he and his entourage stood in relation to that line. No one has any doubt of the truth, least of all the man himself, given his extraordinary demonstration of how to exploit legal technicalities so as to avoid testifying.

The evidence is plain to see—parastatal organizations such as South African Airways and the national electricity provider Eskom have been looted to the extent that they can barely function, and numerous politicians close to Zuma amassed staggering wealth during their period in office, legitimate reasons for which are hard to find.

The patience of the legal system ran out in late June when the seemingly untouchable ex-president was given a fifteen-month sentence on the basis of his refusal to testify when summoned to do so before the corruption commission. The police were given three days to arrest him by the court, should he fail to turn himself in. Zuma retreated to his remote Zululand fastness—a palatial compound for him, his four wives, and an enormous catalogue of relatives, paid for by the unwitting taxpayer—where he was soon surrounded by fire-breathing supporters threatening dire consequences were he to be taken into custody.

And then, surprisingly, Zuma blinked first. On the night of July 7, he handed himself over to the police and was held in the nearby town of Estcourt. One-nil to the state, one-nil for the rule of law, and a telling blow against ethnic chauvinism, said (almost) everyone. Little did they know how much damage public order was about to suffer.

In response to the arrest, a combination of massive opportunistic looting and less visible organised sabotage saw the province of KwaZulu-Natal lying in ruins within a few days, as did parts of the economic centre of the country, Gauteng province, also home to substantial numbers of Zulu speakers. Thousands of people stormed malls—more than 150 of which were destroyed—and warehouses, emptying them of goods and burning them to the ground. More interestingly, the strategic highway between Durban, the country’s major port, and Johannesburg, was blocked in an apparently professional operation, and numerous electrical sub-stations and water purification plants were also attacked. During all of this, there was barely any reaction from either the police or the armed forces.

Three weeks later almost four hundred people had died, economic damage was estimated at almost U.S. $2 billion, food and medical supplies in many parts of the two affected provinces were seriously disrupted, racial tensions (particularly between Zulus and the Indians of Durban, a community heavily invested in small- to medium-sized business, as well as between Zulus and immigrants from elsewhere in Africa) had been stoked to a boiling point, massive job losses were predicted, and incalculable damage had been done to the sense that South Africa was a country where justice could prevail and law and order might be relied upon. If things have quietened down now, it’s probably because there’s nothing left to take.

So, what are we to make of all of this?

First, South Africa is an extraordinarily unequal country. A tiny minority live in great wealth, a smaller minority (initially mostly white, now more diverse) live reasonably comfortably, at least to the extent that they are not dependent on state services, and the vast majority of citizens (almost all black) live in poverty unimaginable in the United States. This is the proverbial explosion waiting to happen.

But this particular explosion hasn’t happened yet. It is significant that seven of the country’s nine provinces experienced no looting, despite some of them being a good deal poorer than KwaZulu-Natal and Gauteng. So the roots of this unrest must be sought in that corrupt and extortionate faction of the ANC which is in hock to Jacob Zuma, and fears going down with him. In attempting to set the country alight, this network hoped to capitalize on a “spontaneous” uprising and use the ensuing chaos to re-establish control over the party and therefore the government. But this attempt, being too narrowly and too ethnically based, burnt itself out before South African president Cyril Ramaphosa’s authority came under serious threat. The president, unchallenged in all but the two affected provinces, simply had to keep calm and ride the crisis out, preferably without causing large-scale loss of life.

The economic conundrum for South Africa is, as is true anywhere, those who are shut out of prosperity and security will be happy to burn what they perceive as “the system” down. This marginalised sector of the population forms a much larger percentage of the total than its equivalent in the United States does. But of course, looting the system exacerbates the inequalities, and it’s hard to see how reconstruction can take place without the kind of centripetal economic forces that are responsible for large-scale marginalisation in the first place. And so the pendulum swings.