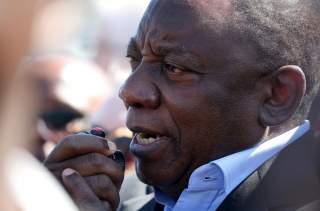 South Africa’s Joint Constitutional Review Committee declared on November 15 that the country would continue legalizing land expropriation without compensation. At the committee’s recommendation, the South African Parliament is now set to vote in 2019 on a proposition to change the nation’s constitution. As it stands, Section 25 of the constitution mandates that there must be “just and equitable” compensation if land is taken from a property owner. But the proposed amendment would remove the compensation requirement—if the property is taken from white landowners.

Parliament set up the Review Committee in February to find out whether there was a “necessity for . . . [land] expropriation without compensation,” and to independently review written and oral testimonies from the South African people concerning the issue. But the committee has been far from neutral—it’s mostly staffed with pro-government politicians.

So the committee has just neglected their constitutional duty to consider the views of the South African people, and, as a result, poisoned the entire decisionmaking process.

As the FW de Klerk Foundation, an organization dedicated to upholding South African democracy, said, “The outcome of the so-called democratic process was decided before it began.” Indeed, in the very first committee meeting, former co-chair Vincent Smith proudly announced that “expropriation is going to happen whether people like it or not.”

To measure public opinion on land seizures, the Committee invited South African individuals and organizations to send written submissions expressing their views. However, the Committee ignored 99.9 percent of the 720,000 submissions that were sent in, making the legitimacy of this supposed democratic process almost laughable.

Roughly 270,000 submissions were discarded because they were supposedly “inquiries, unrelated, blank, and duplicate submissions.” Of the approximate 450,000 submissions that remained, the Committee looked at a mere 400 comments or 0.09 percent. According to the Committee’s co-chair, this was somehow an adequate sample size to give “an idea of what South Africans are saying.” South Africa’s leading opposition party, the Democratic Alliance (DA), correctly branded the Committee’s conclusion as “a complete farce.”

Afriforum, an Afrikaan NGO, explained: “it is not suggested that each of these submissions needs to be considered individually…it is at least required that they be considered and form part of the analysis of public participation.” Legally, public participation remains crucial when considering a constitutional amendment. Yet the Committee continues to claim the majority of South Africans are favor of the constitutional amendment and that they “did everything possible to go by the rules.”

The Committee also heard thousands of oral testimonies in a forum open to the public. Of these oral testimonies, 77 percent were opposed to land expropriation—a remarkable difference that calls into question the Committee’s dubious claim about the consensus of written submissions.

Even more troubling is the fact that if Parliament were to vote on the amendment today, the proposition would likely pass. President Ramaphosa’s African National Congress (ANC) currently holds 62 percent of the seats, and the Marxist pro-land expropriation Economic Freedom Fighters (EFF) hold another 6.25 percent.

By pursuing this ill-conceived policy, the Committee may have just sabotaged South Africa’s already weakened economy, too. Kuben Naidoo, a deputy governor of the South African Reserve Bank, has said that if the amendment compromises property rights, there will be “an extremely large systematic effect on the banking sector.” Undoubtedly, weakened property rights will mean businesses and individuals are reluctant to invest in South Africa out of fear their capital and property won’t be protected.

Luckily, the people of South Africa have an opportunity to rid the country of this ruling and its catastrophic economic policy in May 2019’s general election. Parliament is unlikely to vote on the amendment before then, so there’s an opportunity to see the policy of land expropriation without compensation halted in its tracks. Disregarding the property rights of an ethnic minority due to the historical grievances committed by their racial group nearly always ends in catastrophe.

The people of South Africa should recognize what little thought their politicians give their wishes and, in turn, vote them out of office in the spring. As I’ve written previously in The National Interest, if the South African people instead give the ANC another term in office and support that egregious land expropriation policy, the brutal consequences on their nation are certain to come hard and fast.

Alexander C. R. Hammond is a researcher at a Washington D.C. think tank, a Senior Fellow at African Liberty, and a Young Voices contributor. He writes about economic freedom, global well-being, and African development. To keep up with his latest work follow him on Twitter @AlexanderHammo.​