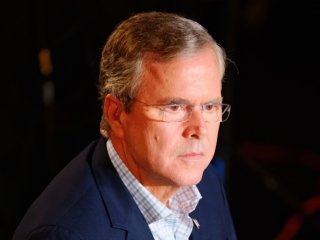 Donald Trump went for broke in South Carolina. The result was what Newt Gingrich on Fox News called a “huge win” for the New York billionaire. What Trump himself deemed an “incredible moment” signifies that his strategy of directly taking on the party’s political correctness—a dogma enforced by former vice-president Dick Cheney and his neocon paladins—is paying off big time.

The Palmetto State once resurrected the fortunes of George W. Bush. Now it became the graveyard of the Bush family’s hopes. Even playing the Mommy card didn’t help Jeb, who can shed the phony “!” that he affixed to his first name. Jeb! turned out to be just plain old Jeb. Even his act of bowing out was low-energy—a noncommittal shrug of the shoulders. Meanwhile, Senator Ted Cruz announced Saturday, “the screaming you hear now from across the Potomac is the Washington cartel in full terror that the conservative grassroots are rising up."

He has a point. Sure, it’s always possible that Senator Marco Rubio will stage a comeback on Super Tuesday. But the endorsement of South Carolina Governor Nikki Haley didn’t really allow him to close the gap with Trump, who won a decisive victory. For all the robocalls badmouthing Rubio, Cruz came in third, just behind him. The party elders may stage a last-ditch offensive on behalf of Rubio but he lacks Cruz’s toughness and brains. Like Jeb, he may have to head back to Florida, where he can run for governor and prepare for a new race. It increasingly looks as though no Republican can stop Trump. But Hillary Clinton could.

If Trump correctly adhered to his image of the bad boy outsider, then Hillary Clinton also got it right in sticking to her message of caution, sobriety and experience. The Republican party and the Democratic party are going on opposite paths. The GOP has become the radical party. The Democrats not so much. The Democrats want to conserve, not overthrow, the Obama era.

The biggest loser last night was Bernie Sanders. If Sanders had won in Nevada, he would have delivered a crushing blow to Clinton’s hopes. Given Clinton’s success with African-American voters in South Carolina, it seems implausible that Sanders, a professional gadfly, will acquit himself well on Super Tuesday.

Still, Sanders has pointed to the weaknesses that could hobble Clinton in a general election. Jacob Weisberg notes in the Financial Times that Sanders’s success with younger Democratic voters is striking: “In the Iowa caucuses, he won an estimated 84 percent of the vote of those aged 18 to 29, compared with Hillary Clinton’s 14 percent. . . “ Like Trump, Sanders is saying that the system is broken and that it has to be changed from outside. He’s been trying to buy the election—not with money from big campaign donors or shadowy PACs but by telling voters that he’ll give them everything, from education to healthcare, for free. He’s the Willy Wonka of the Democratic party.

Where does this leave Clinton?

In the fall Trump can run as the true change agent. Clinton cannot. The question for Trump will be if he can convert the enthusiasm for him inside the Republican party into a wider movement. Right now, he’s basically being written off. But then again, the political elites wrote him off as a candidate for the GOP nomination. Weekly Standard editor William Kristol, for example, has declared “Peak Trump” on Twitter at least eleven times. If Trump does get the nomination, then a segment of the neocon camp will likely defect to Hillary Clinton. Others will simply remain aloof.

The hurdles to becoming president are currently higher for Trump than Clinton. He will have to reinvent himself again, something he has already hinted at by declaring that he would display greater “flexibility” once he wins the nomination.

But he is already succeeding at his goal of smashing the Republican party. As the blog Sabato’s Crystal Ball puts it, “the hour is growing late to stop Trump.” He has become a phenomenon bigger than the GOP itself. After Trump’s successes, the GOP will no longer be able to operate on autopilot. The GOP—and America—is living in the age of Trump.