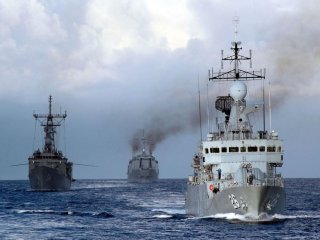 China’s domination of the South China Sea is not yet a fait accompli, but the United States must implement a countercoercion strategy more urgently in order to maintain a favorable balance of power.

Since the beginning of this year, China has deployed surface-to-air and anti-ship missiles, as well as fighter aircraft, to Woody Island, a part of the Paracel Island chain in the South China Sea. These actions are stepping stones for China to dispatch missile batteries and jets to the more geopolitically significant Spratly Island chain. Now, there is growing concern that Beijing may declare an air-defense identification zone in the South China Sea. Left unchallenged, the Chinese are on track to create “mini denial zones” and bring greater coercive force to bear against neighboring Southeast Asian states. If current trends continue, the South China Sea will be a “Chinese lake” before 2030.

Rollback of Chinese gains in the South China Sea is not a viable policy option—the island building is a reality and, short of force, there is little Washington can do to make China withdraw from features it occupies. Thus, Washington must focus its efforts on preventing Beijing from expelling another claimant from a contested territory. One component of U.S. strategy should be the expansion of military assistance programs for Southeast Asian partners. Littoral Southeast Asian states badly need maritime domain awareness capabilities, coast guard and naval vessels, and coastal defenses, as well as additional training to fend off Chinese maritime coercion—all of which the United States can provide.

Since the announcement of the pivot to Asia in 2011, the United States has launched several initiatives to build partner capacity in Southeast Asia, including loosening arms export restrictions on Vietnam and negotiating an Enhanced Defense Cooperation Agreement with the Philippines. The U.S. military also maintains relatively small ongoing programs to provide maritime domain awareness and increase patrol capacity for Indonesia, Malaysia, the Philippines and Vietnam.

However, despite the current administration’s strategic prioritization of the Asia-Pacific, the United States still only devotes 1 percent of its foreign military financing (FMF) to Asia, a number not commensurate with our interests in the region. The next administration will need to ramp up its military assistance efforts if it hopes to provide American partners with a minimum credible deterrent.

There are three main policy considerations that ought to guide capacity building for American partners.

First, the United States needs to supply additional arms and training to boost partners’ maritime operational capabilities. In fiscal year 2014, Indonesia, the Philippines and Vietnam collectively only received $74 million in FMF funding. By comparison, Egypt receives $1.3 billion in FMF every year. The administration also spent $500 million on a Syrian rebel train-and-equip program (not an FMF program) that was ultimately scrapped as a failure. Admittedly, these are imperfect comparisons, but the point remains that the United States continues to spend “budget dust,” relatively speaking, to assist our Southeast Asian partners in resisting Chinese maritime coercion.

For the FY 2016 National Defense Authorization Act, the Senate Armed Services Committee, led by Senator John McCain, rolled out a five-year, $425 million, Southeast Asia Maritime Security Initiative (MSI) to provide further training, infrastructure construction and vessels for Southeast Asian partners. However, Congress ultimately only authorized $50 million for FY 2016, rather than the entire five-year program, which makes it difficult to plan out multiyear projects. In its FY 2017 request, the Pentagon asked for $60 million for the MSI and reiterated its plans for the full $425 million, five-year effort. In the coming budget battle, whether Congress decides to fund the program in its entirety will be a key barometer of America’s commitment to maintaining the peace in Asia. Both China and American partners will be watching.

A new administration could lead the way by expanding the Maritime Security Initiative, which is directed by the Department of Defense and is not an FMF program, as well as proposing a robust Foreign Military Sales package to the Philippines within the first one hundred days in office. In April 2001, President Bush announced a substantial military assistance package for Taiwan as a signal of his administration’s priorities. The next president should consider a similar move with Manila, albeit one that suits the Armed Forces of the Philippines’ needs and capabilities. U.S. assistance to the Philippines, as with any partner, should balance funding for logistics, maintenance and workforce systems with that for the actual defense hardware.

Increased FMF to the Asia-Pacific will require high-level attention from the secretary of state and secretary of defense to overcome the significant bureaucratic and political hurdles involved in freezing or reducing FMF levels in other regions.

Second, the United States should coordinate more explicitly with Japan in providing security assistance for Southeast Asian partners. Tokyo has become more active in the region, over concern for China’s ability to cut off the maritime trade routes that serve as Japan’s economic lifeline.

Prime Minister Shinzo Abe has led Japan toward a more active foreign policy by increasing the defense budget and loosening constitutional restrictions to allow Japan’s Self-Defense Forces to cooperate with partners in limited security missions. In April 2014, Tokyo also removed a longstanding arms export ban. Since then Japan has signed defense R&D agreements with Australia and the United Kingdom, and Mitsubishi Heavy Industries has bid to build Australia’s next generation of submarines.

Moving forward, the United States should more explicitly coordinate its partner capacity-building efforts with Japan. In 2015, Washington established bilateral working groups with both Indonesia and Vietnam to help clarify their maritime defense requirements. Japan should be involved in these consultations to prevent redundant or contradictory efforts. In some areas, Japan will be able to provide comparable hardware for a much more affordable price. For example, the Kawasaki P-1 maritime surveillance plane costs $90 million less than a U.S. P-8 Poseidon.

In addition to direct arms transfers, Japan is an active provider of strategic “official development assistance (ODA)” that links aid and security interests. In 2014, Japan revised its ODA charter to allow the funding of security capacity programs for ASEAN countries. If properly planned, Japanese funding for power grids, airports and port facilities could serve as dual economic and defense infrastructure. Dual-use ODA is lower profile than direct arms transfers, thus making it more palatable for Japan’s pacifist-leaning domestic constituencies and reducing the chance of hostile rhetoric from Beijing.

Even willing partners, such as the Philippines, lack the capacity to quickly absorb high-end American technology. The Armed Forces of the Philippines suffers from decades of poor management and bureaucratic infighting: it currently fails to even spend its own acquisition budget. Manila spent less than 10 percent of the $8 billion set aside in its 1995–2010 procurement plan. Helping the Philippines to reach a minimum credible deterrent posture will be a generational undertaking.

In the near term, the next administration should focus its efforts on filling gaps in the maritime intelligence, surveillance and reconnaissance (ISR) capabilities of its Southeast Asian partners. If Asia’s littoral states cannot see Chinese activity in their waters, it will be difficult for them to prevent Beijing from seizing additional islets in the Spratlys.

As the balance of power in the South China Sea continues to shift in China’s favor, expanded partner capacity building must be one component of a larger strategic U.S. response. Military assistance alone will not provide a “quick fix,” but it will expand our partners’ defense capabilities, build reassurance of U.S. strength in the region and impose costs on China’s militarization of Asia’s littoral seas.

Edward Linczer is currently an Asian Studies Research Associate at the American Enterprise Institute and a Non-Resident Junior Fellow at the Center for the National Interest.