South China Sea: Hanoi and Manila Are Caught Between a Rock and a Hard Place 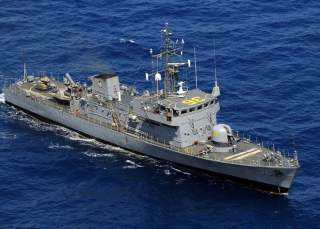 While talks of Chinese retaliation in the South China Sea (SCS) may inflame Cold War imaginations, Washington and Beijing are not necessarily the relevant actors in the next phase of Freedom Of Navigation Operations (FONOP) in the region. For clues on the future of FONOPS, look to Hanoi and Manila.

The FONOP conducted by the U.S. Navy in the Spratly islands (around Subi reef in particular) on October 26 substantiated the position asserted by senior U.S. Navy officials and Secretary of Defense Ashton Carter over the past few months. But the apparent election of an “innocent passage” operation by U.S. officials generated confusion as to its legal rationale: Is the objective to assert the right of “innocent passage” for warships without prior authorization? Or is it to contest the recognition of reclaimed features and Low-Tide Elevations (LTE) as islands with a twelve nautical mile territorial sea under customary international law?

While the first question hinges on the interpretation of Article 19 of the United Nation Convention on Law of the Sea (UNCLOS), the second pertains to the legal nature of LTEs and reclaimed islands under Articles 13 and 60. But perhaps the U.S. – China legal quagmire is not the operation’s main take-away. The FONOP allegedly targeted Vietnamese and Filipino occupied islands and features as well. Its impact on these parties is more complex: It manifests U.S. commitment but also exposes these stakeholders’ excessive claims.

In the context of escalating SCS land reclamation efforts, the United States is faced with a series of unappealing options: action or inaction, unilateral or multilateral. Now that the first option was “called”, the next phase will hinge on neighboring countries’ position on FONOPS.

Under U.S. policy, these operations are a means of contesting excessive territorial claims under international law, as reflected in UNCLOS. Ironically, the U.S. is both UNCLOS’ champion and “enfant terrible”: enforcing it on the one hand and refusing to ratify it on the other. While usually conducted by the U.S. Navy alone, the SCS stakes are such that third party participation could become a critical asset.

Phase one: Unilateral operation - U.S. Navy as sole enforcer of the law of the seas

The legal impact of the October 26 operation remains ambiguous. U.S. officials referred to an exercise of the right of “innocent passage”, which would imply the recognition of a territorial sea under UNCLOS Article 19. This is inconsistent with the nature of Subi reef, which qualifies as an LTE under Article 13, and therefore does not enjoy a twelve nautical mile territorial sea. In any case, the issue is moot in that the U.S. does not take any position on the sovereignty of these islands and features.

Despite confusing wording, the end objective is probably to characterize the waters around Subi reef as the high seas, as opposed to a twelve nautical mile territorial sea surrounding islands under UNCLOS Article 121. The aim is to make China’s land reclamation efforts legally void pursuant to Article 13(2): “Where a low-tide elevation is wholly situated at a distance exceeding the breadth of the territorial sea from the mainland or an island, it has no territorial sea of its own.”

The FONOP’s challenge of Vietnamese and Filipino claims legally operates in a similar manner. Both countries have publicly stated their official support for FON on multiple occasions, stopping short of any material commitment (U.S. - Filipino meeting in August 2015; India - Vietnam joint communiqué in September 2014).

But their official endorsement of FON does not entail the lapse of their claims. If the October 26 FONOP is construed as an “innocent passage” under Article 19, then Subi reef qualifies as an island with a twelve nautical mile territorial sea. Legal clarification and third party participation is therefore instrumental in making the FONOPS effective.

Both Japan and Australia are hinted at as potential participants in joint FONOPS with the U.S. Navy, although not specifically within the twelve nautical mile limit of contested features in the SCS. More important is other SCS claimants’ willingness to participate. This would strengthen the following legal principle: China’s behavior does not confer customary international law value to its claims under the nine-dash-line.

From a public relations perspective, the addition of one or several parties would constitute a legitimizing factor to induce China to clarify its claims and accept the jurisdiction of international tribunals. The timely award on jurisdiction and admissibility by the tribunal at the Permanent Court of Arbitration (PCA) provides renewed impetus to confront Chinese territorial claims under international law.

From the Vietnamese and Filipino point of view, participating in FONOPS is not a walk in the park. First, the October 26 FONOP apparently targeted several islands or features occupied by their respective forces. Further, the United States has consistently considered several of their claims as excessive. It has routinely conducted FONOPS in these waters, as reflected in the 2014 FON Report.

Second, participation might entail implicit recognition of the “excessive” nature of their claims. This could translate into the non-recognition of territorial seas surrounding Low Tide Elevation (LTE) features or artificial islands, as provided in UNCLOS Article 13(2) and 60 respectively. This would jeopardize their own land reclamation efforts in the SCS, as detailed in the August 2015 “The Asia-Pacific Maritime Security Strategy” by the Department of Defense.

Joint FONOPS by ASEAN members and the U.S. might also be inconsistent with their commitment to consultations and negotiations as a means of resolving disputes under the ASEAN Charter. Violating the Charter could slow the progress of negotiations on a binding Code of Conduct (COC) for SCS claimants, even though the current stalemate minimizes the persuasive value of such argument.

Last but not least, these countries will face considerable pressure at home to sustain their claims. Participating in the next phase of FONOPS might be construed as a show of subservience with regard to the United States. The Philippines might also find renewed hope in the pursuit of its claims in international courts thanks to the recent arbitral decision on jurisdiction and admissibility. Any further actions on its part would come under the tribunal’s scrutiny, and thus affect its chances of winning on the merits. Similarly, Vietnam’s involvement might preclude its future ability to adjudicate its claims.

Back to legal clarity

The SCS is only a small piece of the whole strategic picture, which is rooted in regional and global power shifts. It is reflected in the accommodated rise of China and the ongoing negotiation of a new regional order between China and the United States. The United States needs to adopt a strategy that focuses on long-term objectives.

Given the power discrepancy between China and its neighbors, the United States is understandably the sole resort to assert a legal resolution to the SCS disputes. All claimants seek the moral high ground. The United States should recognize its role as the rule-maker. In 2015 - 2016, a U.S. report setting out the legal basis for FON operations in the Spratly Islands is urgently needed. Not only will it alleviate current tensions, it will contribute to the development of international law in an area where it is critically needed.

Despite inconsistent U.S. signaling, the ball is now in the Vietnamese and Filipino court: will they maintain their neutrality with regard to FONOPS but face China’s increasing assertiveness? Or will they close ranks behind the United States; thus recognizing the lack of standing of some of their claims under international law?

Truong-Minh Vu (PhD) is the director for the Center for International Studies (SCIS) at the University of Social Sciences and Humanities in Ho Chi Minh City. He is co-editor of the book “Power Politics in Asia’s Contested Waters – Territorial Disputes in the South China Sea” (Springer, forthcoming in 2016).

Jeremy Lagelee is a current LL.M. Candidate at the Georgetown University Law Center as well as a research associate of the Center for International Studies (SCIS) at the University of Social Sciences and Humanities in Ho Chi Minh City.