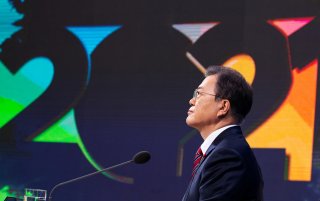 Climate change has ramped up as a significant geopolitical issue for 2021, and the United States and South Korea are looking to influence the global debate. While working from dissimilar energy resource bases—the United States has abundant fossil fuel reserves, South Korea doesn’t—both countries are considering policies targeting net-zero emissions, increased dependency on renewable energy and reducing fossil fuel consumption. This offers important opportunities for the two nations to cooperate.

As the United States and South Korea hold bilateral climate summits, at least one core issue should guide their deliberations and keep them within the realm of twenty-first-century realities. That being, the space between where the United States and South Korea are today and where they want to be in a zero-carbon future will be dominated by great-power competition, much of which will be around energy resources and technologies and much of which will be indifferent to climate change concerns. As such, that space should be navigated strategically, with constraints that extend beyond domestic carbon reduction and account for the geopolitical implications of attempting to disengage from the international fossil fuel network.

While China offers carefully-crafted pledges to peak its carbon intensity by 2030 and to be carbon-neutral by 2060, it’s clear from its fourteenth Five Year Plan that China intends to retain and use fossil fuels as strategic resources. China also is financing over 50,000 MW of coal-fired power plants in other countries and increasing its buy-side market advantage in natural gas.

Meanwhile, Russia continues leveraging its oil and natural gas reserves to meet geopolitical objectives, including building new pipeline capacity to China. This creates an interdependency around strategic resources that will link the two powers for at least thirty years.

China and Russia are moving toward fossil fuels, not away from them. And neither country gives any indication it’s planning to reconfigure its respective energy infrastructure for the sake of addressing climate concerns. Instead, each is pursuing its energy interests in ways that sometimes contribute to global climate efforts but oftentimes undermine them.

It’s questionable whether the United States or South Korea actually can transition away from fossil fuels. The United States is the world’s most advanced economy and depends very heavily on fossil fuels to provide security for much of the free world, though the Pentagon is exploring other sources of energy. For South Korea, fossil fuels provide 87 percent of the country’s total energy needs and 67 percent of its power generation. While an 8.2 GW offshore wind project has been proposed as a step toward a cleaner energy future, it can offset only a small fraction of the output from South Korea’s coal and natural gas power generation. Nuclear power, while optimal for meeting the demands of reliability and low-carbon energy, is politically tenuous.

What isn’t questionable is that a transition away from fossil fuels will dilute the diversity of energy resources and energy technologies in the United States and South Korea industrial bases while great power competitors China and Russia expand their options. This contrast raises security concerns as emerging economies are moving in the same direction as these authoritarian U.S. rivals—toward fossil fuels—which could shift the geopolitical advantage in energy and energy technology partnerships to China and Russia. China has simultaneously captured large shares in global markets for many renewable energy products, like solar panels and batteries; Russia has dominated the international nuclear market for some time.

The Asia-Pacific region alone accounts for 44 percent of global energy consumption, 45 percent of fossil fuel consumption and 50 percent of global carbon emissions. Values that will only increase as countries turn to reliable resources and proven technologies to industrialize their economies. The United States and South Korea can speak of energy transitions, but emerging economies aren’t looking at a transition—they’re looking for traction. And if they partner with China or Russia, it’s unlikely low-carbon will be a key objective.

U.S. and South Korean climate policy must account for these realities. Instead of setting their respective countries on a course to transition away from fossil fuels, the longtime allies should remain engaged in the global fossil fuel network and orient their bilateral climate diplomacy toward an energy alliance around research, development and deployment of low- and zero-carbon technologies that include fossil fuels. The United States and South Korea have a history of cooperation around nuclear power—a technology that should be at the frontline of the climate change issue. This cooperation can be extended to include high-efficiency natural gas combined-cycle power plants as well as carbon capture utilization and storage/sequestration and direct air capture, both of which are considered necessary for reducing carbon emissions at the global scale.

This will further diversify the energy resources and technologies of their respective industrial bases, rather than dilute them, thereby enhancing what both the United States and South Korea can do to develop and deploy reliable, low-carbon energy infrastructure. Success would provide a strategic hedge against predatory nations, which have no intentions of compromising their pursuit of regional hegemony in energy resources and technologies. It also will benefit the United States and South Korea directly by sustaining America’s current position of strength and influence in oil and natural gas while preserving U.S. supplies as a reliable source to meet the energy demands of South Korea and other countries in a region growing in strategic importance to U.S. interests. With low-carbon as an objective.

Climate policy is energy policy, and energy policy fundamentally impacts a country’s industrial base, thus its position and leverage in the global energy network. Twenty-first-century great-power competition includes competition for dominance in energy resources and primacy in energy technologies. It also includes using those resources and technologies to extend a country’s influence and gain leverage in strategic regions of the world. China and Russia are doing this with fossil fuels, and in other areas, with no sign of retreating. The United States and South Korea must include in their climate policy calculus that authoritarian great-power competitors will exploit for their own geopolitical advantage, what many in the world are calling a crisis and an existential threat to humanity—that being, climate change.

Transitioning away from proven reliable resources such as fossil fuels will only yield more ground to U.S. rivals and limit energy partnership options with developing economies. Yet it won’t change the trajectory of global carbon emissions or insulate the United States and South Korea from the impacts of a changing climate. Neither the United States or South Korea can meet the dual challenges of carbon reduction and great power competition in energy resources and technologies alone—the full power of their alliance will be needed.

The United States and South Korea should take advantage of this climate moment to form such an alliance that leverages vast U.S. fossil fuel resources and the combined expertise of both countries in the development and deployment of advanced low-carbon technologies.

David Gattie is an associate professor of Engineering at the University of Georgia’s (UGA) College of Engineering, and a Senior Fellow at UGA’s Center for International Trade and Security. Gattie is an unpaid member of the advocacy council for Nuclear Matters. Prior to UGA, he worked 14 years in private industry as an energy services engineer and an environmental engineer. He has provided testimony on energy, climate and nuclear power policy before the U.S. House Energy and Commerce Committee. The opinion expressed here is his own.