South Korea and America Must Look Beyond Pyongyang 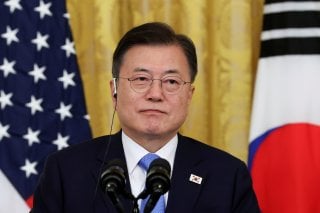 The third area where the U.S.-South Korean relationship needs additional cooperation concerns promoting democratic norms and human rights. As various studies have documented, democracy is under duress and some leaders promote authoritarian models of governance that undermine democratic values.

Surprisingly, South Korean governments have been reticent to speak out for democracy and human rights and against China’s political oppression. Beijing has been repressive at home and over those it considers to be Chinese regardless of where they live. Of particular concern has been Beijing’s draconian crackdown on Uighurs and other minorities in Xinjiang and the dramatic reversal of its commitment to greater political autonomy in Hong Kong. If any country in East Asia seems an obvious champion for democracy that understands the downside of authoritarian governance and has proven its resilience in the face of democratic turmoil—surely it is South Korea. As Moon and Biden have stated, the two governments “share a vision for a region governed by democratic norms, human rights, and the rule of law at home and abroad.”

Biden’s summit for democracy shows he feels an obligation to defend, fight, strengthen, and renew democracy. Hopefully, the results and the process that flow from the gathering will afford closer South Korean-U.S. cooperation and provide an enduring venue for these two democracies to positively impact the globe.

The foundation for a more muscular and closely aligned China policy is set, thanks to the behavior of neighboring states. For instance, public opinion in South Korea and the United States has hardened toward China in recent years. Further, both current presidents have already committed to similar policy priorities. Presidents Biden and Moon said in their May joint statement: “The significance of the U.S.-ROK relationship extends far beyond the Korean Peninsula,” and the two countries “oppose all activities that undermine, destabilize, or threaten the rules-based international order.”

The divergence between popular sentiment in South Korea and the reluctance of occupants in the Blue House to resist Chinese pressure requires attention. If South Korea remains quiet in the face of rising Chinese activity in the Yellow or West Sea, it will only further encourage Beijing’s assertiveness.

Democratic Party candidate Lee Jae-myung has suggested dismantling the Terminal High Altitude Area Defense (THAAD) system deployed in 2017 in response to North Korea’s mounting missile threat. Yet, such an act might embolden North Korean provocations while convincing China that economic coercion works. Dismantling THAAD would also be a poor precedent for South Korea as it seeks to upgrade its defense capabilities in preparation for a transition in wartime operational control (OPCON). South Korean governments should not allow Beijing to veto what self-defense systems they may deploy, whether those systems are missile defenses or more offensive systems such as advanced missiles or nuclear-powered submarines.

The virtual summit between President Biden and Chairman Xi underscored the reality that U.S.-China relations have entered a new phase of more competitive ties. Cooperation will be sought in areas such as climate change and public health. But a new type of major power relationship is needed, and it’s not the one-dimensionally rosy narrative scripted in Beijing. Instead, the current trajectory for U.S.-China relations amounts to what National Security Advisor Jake Sullivan likens to peaceful coexistence. Professor Joseph Nye calls the relationship a “cooperative rivalry”—a great power relationship in which there is at times intense competition over rules, critical technology, and political ideology, but which does not break into outright conflict.

South Korea need not align further with the United States against China but rather for fair international rules. The real choice facing both countries is whether to allow the prevailing order to be unilaterally altered to suit Beijing’s preferences, or to take additional measures to promote rules congruent with democratic interests and values. This is why improved relations among South Korea, Japan, and the United States, are in the mutual interest of all three countries.

When South Korean culture is making a global statement, it’s time for Seoul to enhance its influence in other ways, too. U.S.-South Korean relations need to move beyond a dominant focus on North Korea. While ensuring sufficient attention to both deterrence and diplomacy—to preempt miscalculation and avert an unbridled arms race—the United States and South Korea should look forward to the spring of 2022 as an opportunity to forge deeper ties aimed at guiding the wider region. By building durable rules, advancing technological innovation and secure supply chains, and protecting human rights, the U.S.-South Korea alliance can move from managing Pyongyang to shaping the emerging security environment for decades to come.