South Korea and Japan Must Resolve Their Trade Spat 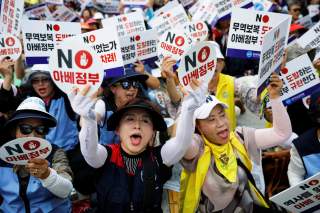 Some foreign-policy disagreements are necessary and some are a matter of choice. The current low ebb of relations between Japan and the Republic of Korea (ROK) is more the latter rather than the former. U.S. interests not only dictate doing more to restore allied harmony, but also advise strongly against compounding tensions.

Yet President Donald Trump is demanding a rapid and steep increase in host-nation support from Japan and the ROK at a time when those Northeast Asian allies are engaged in a dangerous intra-alliance squabble.

Trump is right to want prosperous allies to shoulder greater burdens. He is especially justified in desiring the redistribution of allied costs when the chief security challenge is mutual defense against the neighbors of U.S. allies.

However, just as the protection of the homeland is an overriding responsibility of the commander in chief, so, too, should national security concerns take precedence over financial ones. America can live with less than perfectly reciprocal and equitable alliances—they’ve always been that way anyway. But the United States really should not risk trying to go it alone in a dangerous world.

Deterring North Korea, managing China, building a region of networked security partners to stand up to revisionist powers, and signaling the durability of U.S. leadership are all vital. They are more important than trying to extract more financial support from allied countries that host American forces at this tenuous moment. Moreover, on top of the recent sharp deterioration in relations between Tokyo and Seoul, there is already excessive doubt in the region about U.S. reliability and staying power.

The Trump administration’s stated vision of a free-and-open Indo-Pacific region is rightly predicated on leveraging effective alliances. Allies and partners are critical to reinforcing Washington’s postwar system, which is under siege from rival powers. As the Department of Defense regional strategy report declares, the “U.S.-Japan Alliance is the cornerstone of peace and security in the Indo-Pacific” and the “U.S.-ROK Alliance is the linchpin of peace and prosperity in Northeast Asia, as well as the Korean Peninsula.”

If America’s cornerstone and linchpin are damaged, then it follows that Washington’s Indo-Pacific strategy is also badly encumbered.

First, the fraying ties between Seoul and Tokyo hamper America’s North Korea policy. Specifically, Washington’s diverted attention helps Kim Jong-un with his divide-and-rule tactics and could undermine deterrence in a crisis. America enjoys maximum leverage on North Korea when policies are tightly aligned among Seoul, Washington and Tokyo. Washington should have learned this during the Perry process—when former Secretary of Defense Bill Perry engaged in concerted trilateral diplomacy to repair cracks in alliance solidarity—at the end of the 1990s. Certainly, the Kim regime works hard to keep all outside powers at odds, and recent missile launches are in part a test of alliance solidarity.

If America’s attempt at negotiating with North Korea is to have any chance of success, then U.S. allies need to be aligned. The United States has been able to engage in experimental diplomacy for two reasons. First, Kim is boxed in because he cannot actually use his weapons without unacceptable risk. Second, he cannot develop his economy without substantive steps toward denuclearization. Whether U.S. diplomacy with North Korea ultimately succeeds or fails, and whether Washington is in need of help with North Korean infrastructure or alliance missile defenses, the ROK, the United States and Japan will all need each other.

A second, related problem is that crisis among U.S. allies hinders dealing with a world in which there is resurgent major power competition. The alliance drift—suggested by a failure to stem the falling out of Japan and South Korea—impedes cooperation for managing an increasingly assertive China and a Russia desperate to remain relevant.

Current alliance troubles especially play into Beijing’s unrelenting narrative that U.S. alliances are relics of the past. That propaganda line argues that the whole postwar system failed to account for PRC ambitions and the future of the “China dream.”

One of the unintended effects of Japan’s recent decision to enforce tighter control over the export of chemicals critical to South Korean manufacturing of semiconductors and display panels is that Seoul could become more dependent on China for those imports. This is advantageous for Beijing because it is in the midst of pushing national champion companies beholden to the Chinese Communist Party (CCP) to dominate cutting-edge technologies.

Although few countries are signing up to the CCP slogan of a “community of common destiny,” the pushback against U.S. leadership and power is prevalent in parts of Asia, even in some allied governments. If responding to the China challenge to rewrite the rules and dominate critical technologies that are key to commanding the twenty-first-century economy is indeed an overriding strategic objective, the United States will need to do a better job of mobilizing others, beginning with its cornerstone and linchpin allies.

Finally, the dispute between Japan and South Korea perpetuates rising nationalism, protectionism, and unilateralism. The (not completely) unintended impact of an “America First” slogan is that any domestic appeal and support is more important than any overseas revulsion. But it is not enough to criticize the administration. After all, other countries in Asia put their country first, time and again. They all have national industrial policies and more closed economic systems. Even America’s closest allies enjoy an element of free riding—especially as the challenges mount and allies and partners fail to pick up the rising tab for security public goods.

But these realities do not alter what is essential for U.S. national security and what is simply desirable.

The Trump administration is simultaneously attempting to arrest China’s bad behavior and most-threatening power gains, while seeking a serious adjustment on power and burden-sharing with effective allies. This includes pressure to correct trade imbalances, as well as demands for the allies to shoulder greater burdens for regional security.

The United States cannot afford the extravagance an unnecessary argument among its closest allies. Instead of managing a proliferating North Korea and an assertive, rising China, Washington must now manage the perception of America as a declining superpower with weakening regional security architecture. That means Trump needs to lengthen the timelines for improving burden-sharing.

If peace is generally best maintained through strength defined as capability plus will, then new questions about U.S. alliances are occurring precisely at the time when solidarity among like-minded powers is needed to check revisionism and aggression.

U.S. pressure and leadership are needed to help the Japanese and South Koreans find a path back to cooperation and away from hostility that puts at risk all that the United States has worked to establish in the region and internationally. But the quarrel between important allies should redouble America’ focus on why these alliances matter in the first place. The United States needs to arrest doubts about its leadership and political will, even as Washington asks its prosperous allies to shoulder greater burdens than in the past.