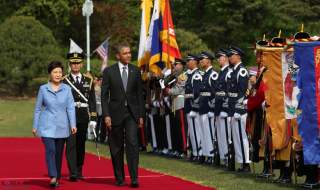 The Republic of Korea is one of the world’s great success stories. The war-torn former Japanese colony has become a high-tech industrialized nation with one of the world’s largest economies. Years of military dictatorship have given way to robust democracy.

But sixty-one years after the end of the Korean War, the ROK still refuses to defend itself. In fact, its officials appear determined to preserve America’s outdated security guarantee by keeping their nation militarily helpless and dependent.

South Korea’s ambitions are similar to those of any other major power. Its businesses operate around the globe. Its people go abroad as missionaries and tourists. Its diplomats participate in foreign forums. Its military contributes to international peacekeeping operations. And its government is creating armed forces capable of acting overseas, including a “blue water” navy for deployment well beyond the ROK’s own waters. The Park government is even considering constructing two light aircraft carriers in the coming decades.

Yet Seoul doesn’t exercise operational control over its own military in wartime. That authority remains with the United States as it has since the Korean War.

American control originally made sense, since the ROK’s authoritarian government was both feckless and reckless. But economic prosperity arrived in the 1960s. Democracy finally came a quarter century later.

Today, the South enjoys vast advantages over its decrepit antagonist to the north: forty times the economic strength, twice the population, a vast technological lead, easy access to international markets and almost unanimous diplomatic support. The so-called Democratic People’s Republic of Korea can’t even count on its traditional ally, China, in a military showdown on the peninsula.

However, the ROK insists that it is incapable of defending itself against the North, which has suffered through mass malnutrition and starvation, agricultural disaster, industrial collapse and international isolation. The Park government complains that the South Korean army lacks adequate command and control, intelligence, surveillance and reconnaissance capabilities—six decades after the last war; after turning into an economic powerhouse; while considering the construction of aircraft carriers.

South Koreans once were embarrassed that operational control (OPCON) was lodged with the U.S. Peacetime operational control and was returned to the ROK only in 1994. The United States was happy to shift responsibility, having been blamed for the depredations of the last military dictatorship because some South Koreans wrongly assumed Washington could have prevented brutal repression as in the city of Kwangju.

The South Korean government raised the issue of wartime control in 2003. The United States again was open, initially proposing to transfer control in 2009. But ROK hawks mobilized against the leftish South Korean government, slowing the process. In 2007, the two countries agreed to turn OPCON over to the ROK in 2012. But after a North Korean nuclear test and other provocations, ROK defense minister Kim Tae-young, representing a more conservative government, complained that the planned date would be “the worst time” to do so. In June 2010, the two governments kicked the shift back to December 2015.

Last year, the South cited North Korea’s latest nuclear test, which, said Defense Minister Kim Kwan-jin, made it “inappropriate to change the command structure as scheduled.” He pointed to other “situations” as well, arguing that “North Korea is different from the past.” At the April summit between President Barack Obama and President Park Geun-hye, the two governments agreed to reconsider the timing. The latest round of bilateral discussions occurred just last month.

Analysts expect the transfer to be bumped back another five to seven years at the annual U.S.-ROK Security Consultative Meetings scheduled for October. Of course, past experience suggests that as 2020 approaches, Seoul will request another postponement. The South appears to be committed to permanent dependence.

In fact, South Korea’s helplessness is a result of its own decisions. To take over OPCON the ROK needs more advanced weapons and an increased ability to use them. However, Seoul should obtain those capabilities irrespective of OPCON to defend itself. If it hasn’t acquired them over the last sixty-one years, what has the ROK armed forces been doing? What is wrong with Seoul?

Indeed, observed Larry Niksch, formerly of the Congressional Research Service: “since the [Combined Forces Command] was formed in the late 1970s, U.S. and South Korean military personnel have worked side-by-side—physically side-by-side—in all of the operations of the command. It is difficult to believe that the South Korean command has not achieved a high level of preparedness over this 30-year period.”

It seems obvious that Seoul has little incentive to take on greater defense responsibilities. Obviously, South Koreans benefit from Washington’s defense commitment. U.S. subsidies allow the South to underinvest in defense while undertaking prestige programs, such as aircraft carriers, which do little to protect against the main security threat—a North Korean attack.

Nevertheless, Seoul pays a price for its dependence. Fearing Nixon administration plans to reduce overseas military commitments, Park Chung-hee’s government sent troops to Vietnam on America’s behalf, resulting in more than 5000 deaths. In recent years, the ROK has similarly backed U.S. efforts in Afghanistan and Iraq, though at a far lower cost.

The South’s dependence on America also allows Washington to interfere with ROK defense plans. In 1993 and 1994, for instance, the Clinton administration considered military action against the North with little concern for the South’s interests. In the 2000s, Washington objected to South Korea’s “Sunshine Policy” of subsidy and accommodation with the North. Since North Korean military attacks in 2010 inflamed South Korea’s willingness to retaliate, the United States has played the pacifist, warning the ROK against precipitous action in response to DPRK provocations.

Although older South Koreans generally viewed the loss of sovereignty as a necessary price to pay for U.S. protection, younger South Koreans are more nationalistic and thus more likely to treat the current relationship as an affront to South Korean dignity and pride.

OPCON’s larger ramifications are a matter of debate. For instance, it is widely believed that the ROK has to make a greater military effort to take over operational control. Doing so would yield increased military flexibility and reduced restraint in responding to North Korean provocations. That should enhance South Korean deterrence.

At the same time, there is widespread fear, mostly among South Koreans, that transferring OPCON would encourage America to “abandon” the ROK. But retired U.S. Gen. Ronald Griffith shared the concern: “the first step to withdraw U.S. forces is turn over the command. That’s step number one, and it’s a slippery slope.”

Of course, the United States has permanent military deployments in Japan and across Europe without exercising operational control of host nations’ militaries. Moreover, the very concept of abandonment is odd. Washington has defended the South for sixty-four years. Given the dramatic change in the regional-threat environment, withdrawing American forces would be a natural act of good sense.

Indeed, OPCON merely is the symptom, since it grows out of the 1953 defense treaty, mutual in name only. A bizarre insistence that commitments cannot change with circumstances similarly afflicts the planned redeployment south of U.S. forces. Gen. Curtis Scaparrotti, commander of the U.S. Forces Korea, advocates retaining a troop tripwire north of Seoul to ensure automatic American involvement in any conflict: “there may be a need operationally to leave some residual in those areas just for proper defense and response.” He called the ROK the Pentagon’s second highest priority, after only Afghanistan.

But why? The ROK mattered in 1950 not because of its intrinsic importance, but because it was part of a larger hegemonic struggle with the Soviet Union. That world is gone.

Washington gets little out of the alliance today. Certainly nothing from protecting the ROK, which is able to defend itself. Some policy makers view U.S. troops stationed there as “dual use,” ready to confront China as well as North Korea. However, Seoul has no interest in turning its permanent neighbor, the PRC, into a permanent enemy to advance U.S. interests elsewhere in the region.

Some Americans, such as Army Lt. Col. James Minnich, argue for broader ties, a “comprehensive, strategic alliance” reaching human trafficking, peacekeeping and climate change. Yet collaboration in none of these areas requires a formal military alliance. Using support for green-energy research as an excuse to maintain a military tripwire along the DMZ is, frankly, bizarre.

It is time to transfer operational command of South Korea’s military back to Seoul. But the change should not stop there. America’s troops should go home, phased out over the next couple of years. More important, the defense treaty should be terminated, transforming the alliance from a relationship of dependence into one of cooperation.

South Korea has much of which to be proud. Despite a hard beginning, the ROK has become one of the world’s most successful and important nations; at least in every major area except defense, since it remains a welfare client of America. Alliances shouldn’t be forever, irrespective of changing geopolitical circumstances. It is long past time for a change.

Doug Bandow is a Senior Fellow at the Cato Institute. A former Special Assistant to Ronald Reagan, he is the author of Tripwire: Korea and U.S. Foreign Policy in a Changed World (Cato) and co-author of The Korean Conundrum: America’s Troubled Relations with North and South Korea (Palgrave/Macmillan). You can Follow him on Twitter: @Doug_Bandow.