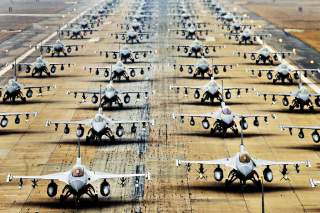 Candidate Donald Trump did the seeming impossible: get elected president while speaking truths that shock establishment policymakers. Such as criticizing the defense dole for South Korea, one of Washington’s most sacred cows. However, as his swearing-in nears, he is being strongly pressed to abandon his contrarian views.

During the campaign, Trump accurately diagnosed the problem of nominal allies becoming costly dependents. He declared, “We are better off frankly if South Korea is going to start protecting itself.” Of that there should be no doubt.

He further explained: “We have 28 thousand soldiers on the line in South Korea between the madman and them.” Also true. Moreover, “We get practically nothing compared to the cost of this.” He’s right: it doesn’t benefit America to pay for the defense of nations able to defend themselves.

Alas, Trump fell short when discussing the solution. He argued: “They have to protect themselves or they have to pay us.” The United States shouldn’t hire out its military like a mercenary force. Rather, Washington should turn over defense responsibilities to one of the world’s wealthier nations. Serious, mature countries should protect their own people, rather than beg others to do so.

However, after being elected, Trump appeared to be going on his own apology tour, calling South Korean President Park Geun-hye to promise that America would be “steadfast and strong” with the Republic of Korea. Policy advisers Alexander Gray and Peter Navarro wrote that “Trump will simply pragmatically, and respectfully discuss with Tokyo and Seoul additional ways for those governments to support a presence all involved agree is vital.” If true, then the president-elect will be effectively declaring preemptive surrender.

South Koreans interpreted the forgoing to mean that the good times will continue: no need to worry their own people by matching North Korea’s military efforts. Indeed, Seoul plans to do whatever is necessary to save its defense subsidies. Foreign Minister Yun Byung-se assured South Koreans that “the government will make various efforts so the South Korea-U.S. alliance that has successfully developed over the past 60 years will continue to move forward without faltering despite the change in the U.S. leadership.”

If the ROK succeeds in its efforts, it will be apparent that The Donald is not nearly as tough as he likes to portray. “Draining the swamp” will take work, and nowhere is the swamp more impermeable than Washington’s foreign policy community. There is a convenient consensus from liberal interventionist to neoconservative that the United States must micromanage the world, using force whenever necessary to impose America’s will even when the stakes are minimal. As a result, American lives and wealth have been squandered around the globe. President Trump must take on this conventional wisdom, and the various factions that hold it—what President Barack Obama termed “the Blob” in Washington.

South Korea would be a good place to start.

The United States is in the South because it has always been in the South, or almost. American forces arrived in the Korean peninsula after Japan’s surrender in August 1945, when the United States and Soviet Union occupied the then Japanese colony south and north, respectively. In 1948 the ROK and Democratic People’s Republic of Korea were established, backed by their respective patrons. The North invaded in June 1950. The United States entered the war to defend the ROK. As allied forces neared the DPRK’s border with China, the latter intervened to prevent Pyongyang’s defeat. The conflict went on until July 1953, when an armistice was signed.

But peace was never formally made. And the United States still has nearly 29 thousand troops stationed in the South, which act as a tripwire to ensure American involvement in any new war. And the ROK always wants an increased commitment. It recently requested that the U.S. station “strategic weapons,” such as the B-1, B-2 and B-52 bombers in South Korea.

In its early years the South remained an economic and political wreck, vulnerable to renewed attack by Pyongyang, still led by Kim Il-sung, who launched the earlier conflict. Moreover, the U.S.S.R. and People’s Republic of China continued to back the DPRK.

However, the world has changed dramatically. In the 1960s South Korea took off economically, soon passing the collectivist North. Democracy arrived in the ROK in 1989, when the South’s last military junta passed into history. With the end of the Cold War, Pyongyang lost its most important allies: both Moscow and Beijing recognized Seoul, and neither would back the DPRK in another aggressive war today.

The South possesses roughly twice the population and forty times the GDP of North Korea. South Korea is an industrial power. Seoul enjoys the international connections of a first rate state. Although the ROK’s military is smaller than that of the North, the South’s equipment and training are far superior. Only in quantity is Seoul’s armed forces inferior and there is no artifact of geography which prevents the ROK from doing more. Rather, South Korea has no reason to invest more on territorial defense when the world’s greatest military power is prepared to intervene on its behalf.

Washington turned defense into welfare. Nations such as the South act like Ronald Reagan’s famous “welfare queens,” profiting from Americans’ generosity. Trump’s campaign remarks caused much wailing in Seoul, worried that it might have to contribute more than the roughly $900 million provided as “host nation support” — about 40 percent of the total. However, the greater cost to the United States is that for raising, equipping and maintaining military units made necessary by additional force commitments. Americans fully bear this burden. Even worse is the risk of being dragged into an unnecessary war.

There’s no persuasive reason for the United States to continue protecting populous and prosperous allies. With the end of the Cold War, the Korean peninsula lacks any significant security relevance to America. A second Korean War would be horrid, of course, but would not threaten the United States in any way. Loss of a mid-size trading partner cannot justify a permanent garrison let alone willingness to risk full-scale conflict.

Many American policymakers see the ROK as necessary to contain China, but South Koreans are unwilling to play that role. They want to be defended against Beijing, if necessary, but not to join a Sino-American war—say over Taiwan—and become a permanent enemy of the PRC. Anyway, if the United States and China come to blows, ground troops in Korea would have no useful role to play.

Finally, some have justified America’s military presence as necessary to prevent war, proliferation, pestilence and most every other evil known to man from descending upon the region. No doubt, U.S. defense guarantees do discourage some potential conflicts. However, America’s role also encourages allies to behave irresponsibly, forcing Washington to try to dissuade nations such as the ROK from doing what they perceive to be in their national interest. Moreover, the military tripwire ensures U.S. involvement in any conflict even if not in America’s interest.

In East Asia it is in no party’s interest to go to war, and the region doesn’t appear to teeter on the edge of chaos. Indeed, it is in everyone’s interest to promote stability even in America’s absence. And if the result is an arms race, mostly by friendly states seeking to balance against the PRC, why is this cause for U.S. concern? Better to have friends and allies do more, rather than relying on America’s willingness to come in. Washington officials forget that alliances are a means to an end — U.S. security — not an end in themselves.

Would an American departure cause South Korea and Japan to go nuclear? Virtually no one believes that Pyongyang can be persuaded to yield its nuclear arsenal, and the latest sanctions resolution adopted by the UN Security Council will have no more impact than those approved in the past. The North is likely to slowly but steadily expand its nuclear arsenal.

Washington could maintain its nuclear umbrella while withdrawing its conventional forces. But there is something worse than the possibility of friendly democratic states building nuclear arsenals, and that is getting in the middle of a nuclear exchange over stakes of minimal importance to the United States. Nonproliferation is a worthy objective, but America would be safer if it withdrew from a potentially unstable region in which only the “bad guys” have nukes.

In short, Washington should engage in burden-shedding, not burden-sharing. Candidate Trump suggested that the ROK pay America for the latter’s defense services. However, the U.S. armed forces should not be rented out like mercenaries. South Korea is able to defend itself. It should do so.

Of course, it would take some time for the South to adapt its forces and policies to changing U.S. strategy. But the incoming administration should begin the process by setting the end point: no more security guarantee, no more tripwire garrison. The replacement would be an agreement for cooperation as equals on issues of mutual interest. The goal should be responsible internationalism rather than either isolation or intervention.

President Park said that President-elect Trump promised to work with Seoul “to protect against the instability in North Korea.” The best way to do that would be to push the ROK to take the steps necessary to deter and if necessary defeat a North Korean attack. But South Korea will do so only when forced to do so, which means after Washington kicks the South off of America’s defense dole.