South Korea Loses Its Princess and Gains an Opportunity 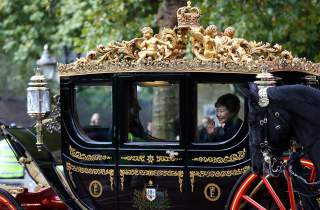 Park Geun-hye rode in an escorted motorcade from the Blue House to her private residence on Sunday with the streets near her home lined by cheering, flag-waving supporters. A larger crowd of detractors celebrated her downfall elsewhere in the South Korean capital. Having now lost presidential immunity, the sixty-five-year-old Park faces criminal charges on bribery, abuse of power and a possible prison sentence. In South Korea’s polarized, unforgiving political atmosphere, two former presidents were actually imprisoned—unlike Nixon, their pardons came only after they served some jail time. Still, in her first public comment since her removal from office, Park, upon her arrival at her private residence, seemed to adopt a defiant tone. She was quoted by a spokesman as stating that “it will take time, but I believe the truth will be revealed.”

Whoever succeeds Park Geun-hye as South Korea’s president will face the increasing threat of a nuclear North Korea. He or she will need the firm resolve of such allies as the United States and Japan. Issues involving the political stability of northeast Asia and beyond require a smooth political transition in Seoul. In the meantime, the sad political demise of Park Geun-hye shows that not all princesses get a fairytale ending.

Dennis Halpin, a former advisor on Asian issues to the House Foreign Affairs Committee, is currently a visiting scholar at the US-Korea Institute at SAIS (Johns Hopkins) and a consultant to the Poblete Analysis Group.