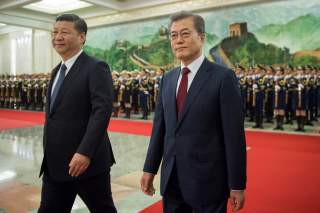 In 2014, Japan reinterpreted its constitution to give the Japan Self-Defense Force (JSDF) the right to participate in collective self-defense. In response, a South Korean progressive lawmaker said that “Japan, as a country that doesn’t repent for its history of war crimes, has become a nation that can wage war again.” In response to Japan’s 2015 passage of bills to legalize collective self-defense, a South Korean conservative lawmaker criticize the shift as “an attempt by the [Shinzo] Abe government to seize hegemony in East Asia.” These reactions by South Korean politicians no doubt have been motivated by the desire to boost their domestic standings. Nevertheless, concerns about Japan’s return as a normal military power in South Korea are very real, as seen in surveys. At the same time, many Asia-watchers believe that Seoul has been putting too much effort into hedging between Washington and Beijing and that South Koreans in general have an unreasonably rosy view of China. A close examination, however, shows that this image of South Koreans as being pro-China and anti-Japan is inaccurate.

It is true that Japanese Prime Minister Shinzo Abe, due to his right-wing views, constantly ranks at the bottom in Gallup Korea surveys compared to leaders of the United States, China, North Korea and Russia. However, a survey by the Asan Institute for Policy Studies in March 2017 measuring favorability ratings by country, not by individual leaders, shows that Beijing’s boorish policy on the deployment of the Terminal High-Altitude Area Defense (THAAD) system on the Korean Peninsula led to China’s favorability rating (3.21 out of 10) among South Koreans dipping below that of Japan (3.33). Moreover, according to the June 2018 joint report by Genron NPO and the East Asia Institute, South Koreans viewed North Korea (67.4 percent) as the primary military threat, followed by China (42.2 percent), and then Japan (36 percent). A recent Chinese survey noted that two keywords South Koreans use to describe China are “a security threat” and “poor quality products.” It is clear that South Koreans do not have particularly high regard or fondness of China.

To be sure, South Korean public opinion toward China is likely to fluctuate depending on circumstances while remaining generally negative toward Japan for the foreseeable future. Indeed, the Asan Institute’s report released in July 2018 shows that China’s favorability rating (4.16 out of 10) in June 2018 was again higher than that of Japan (3.55). Tokyo’s inability to fully come to terms with its imperial history certainly plays a role in this trend. As some analysts point out, however, an element of “inferiority complex” among South Koreans toward Japan likely also plays a role. As another analyst notes, there is a widely-shared narrative among Koreans that, during the colonial period, “Korea’s glory was thwarted by Japan, a morally and culturally inferior country.” Nevertheless, the recent fluctuation in polls demonstrates that South Korean perceptions toward the two countries are far more complex than are often stereotyped in the media.

From a historical perspective, China, to Koreans, has been the predictable devil they have learned to manage for more than a millennium. But the common misunderstanding of Korea as a historic model tributary state mainly derives from Joseon Korea’s relations with Ming and Qing dynasties from the late fourteenth century to the late nineteenth century. A look at China-Korea relations going back to ancient times shows that the relationship has actually been a complex one in which Chinese empires in times of unity imposed tight tributary discipline, sometimes through brute force, over Korean kingdoms, which conversely asserted greater autonomy and status whenever Chinese dynasties suffered internal discord. During the period of internal divisions in China between the Han and Tang dynasties (from the early third century to the early seventh century), Goguryeo, the most powerful kingdom in Korea at the time, extended its territory deep into the area that is now Manchuria and northeastern China. During the unified Tang period (from the early seventh to the early tenth century), China established a mature tributary relationship with a unified Korea. During the next period of China’s division (from the early tenth century to the late thirteenth century), Korea’s Goryeo dynasty rulers, under the principle of “emperor at home, king abroad,” asserted themselves as the Son of Heaven and emperor. During China’s unified periods under the Yuan, Ming, and Qing (from the late thirteenth century to the late nineteenth century), Korea had the so-called model tributary relations with China. Then, through the alliance with the United States, southern Korea opted out of the Chinese sphere of influence.

Japan, however, has been the devil Koreans have had a more distant and unpredictable relationship with. During the pre-modern times, Koreans saw themselves as culturally superior and as transmitters of civilization to Japan. Hence, Joseon Korea was caught by surprise when Toyotomi Hideyoshi, a Japanese warlord, launched a failed, but still destructive invasion (Imjin War) in the late sixteenth century in an attempt to conquer not only Korea, but also China, an event that some historians consider was more destructive than the Korean War. Based on estimates, Korea lost 20 percent of its population and 80 percent of its farmland during the Imjin War. After the invasion, Japan entered a period of self-imposed isolation for more than two hundred years. Then, during the nineteenth and twentieth centuries, Koreans witnessed Japan transform from an isolated agricultural island state to an industrial military power capable of defeating both China and Russia in wars and occupying half of East Asia. Korea itself came under Japanese control for much of the first half of the twentieth century. After World War II, Japan transformed itself yet again to become a liberal capitalist democracy allied to the United States, with limits on its ability to exercise military power. Having had a front seat view of this astonishing series of transformations, Koreans today have to wonder whether Japan is going to transform itself again and what the consequences of such a development would be, in light of possible American retrenchment, rising nationalist rhetoric in Japan, and its refusal to fully come to terms with the Imperial past.

South Korea since the Korean War has relied on its alliance with the United States, not only to deter the North Korean threat, but also to keep both China and Japan in check. Yet, South Korea’s concerns about its neighbors have never been entirely mollified by Seoul and Tokyo’s alliances with Washington, as South Korea constantly has had anxieties about the durability of American presence in Asia, as described in Scott Snyder’s book, South Korea at the Crossroads. As a relatively weak power in Northeast Asia, South Korea, despite seeking greater autonomy, has generally prioritized strengthening relations with the United States, even under more autonomy-oriented administrations led by South Korean progressives. South Koreans greatly fear weakening or ending of their alliance with the United States, a development that would leave the Korean Peninsula vulnerable again to a rising China and normalizing Japan.

Consequently, South Korea, even under American protection, has pursued a complex balancing act between China and Japan. Korea since the ancient times has had a long record of pragmatism in dealing with its neighbors. For example, the Goryeo dynasty recognized multiple but equal empires in China and Manchuria, and historians are astonished at how rapidly Joseon Korea reestablished political and economic relations with Tokugawa Japan in the aftermath of the Imjin War. In modern times, South Korea normalized relations with Japan in 1965 and began cautious outreaches toward China and the Soviet Union as early as in the 1970s. South Korea continued to improve relations with China, the Soviet Union, and Japan during the 1980s, resulting in the first-ever state visit to Japan by a South Korean president and in Seoul’s normalization of relations with Beijing and Moscow. Even after the democratization of 1988, South Korean presidents, conservatives and progressives alike, have sought to improve relations or at least maintain even-keeled relations with both China and Japan. Recent examples include Park Geun-hye’s attendance at China’s September 2015 military parade and the agreement with Japan to resolve the comfort women issue in December 2015 and Moon Jae-in’s agreement with China in October 2017 to resolve the THAAD dispute and his government’s January 2018 decision to not formally renounce or seek renegotiation of the comfort women agreement.

However, if China continues to act domineering toward its neighbors, South Korean public opinion toward China will likely turn more negative than it is today. Moreover, the young generations in both Japan and South Korea are developing increasingly warmer relations with one another, notably due to their shared affinity in pop culture, whether through Korean pop music and dramas or Japanese animation, while the Chinese government has politicized and targeted South Korean cultural exports in retaliation for the THAAD deployment on the Korean Peninsula. In this context, young South Koreans, who have grown up in a prosperous, culturally flourishing, and increasingly confident Korea (deemed “confident nationalism,” as opposed to “resistant nationalism” by one expert), are likely to have more pragmatic attitudes toward China and Japan, driven less by the historical baggage and insecurities compared to the older generations.