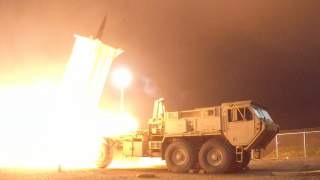 Earlier this summer, in the midst of Kim Jung-un’s latest series of nuclear provocations, I embarked on my first trip to Seoul, which is only thirty-five miles from the North Korean border. The trip was part of an exchange program for ten young foreign policy professionals organized by the National Bureau of Asian Research and the Korea Foundation. We participated in private discussions with senior government officials, journalists, human rights activists and academic researchers.

Every discussion circled back to China and the United States. Many expressed frustration over what they viewed as Beijing’s underwhelming response to North Korea, in spite of its influence over Pyongyang. There was resentment over China’s economic retaliation following South Korea’s decision to deploy an American anti-missile battery known as the Terminal High-Altitude Area system (THAAD). Although my interlocutors lamented that Beijing could no longer be relied on to consider South Korea’s interests, they were more concerned about the perceived decline in American leadership and commitment to the region.

China is South Korea’s largest trading partner, a relationship worth $300 billion. In 2015 Chinese travelers made up almost half of the 17.2 million foreign tourists in South Korea, spending nearly $13.7 billion. Just two years ago, it seemed that Seoul and Beijing were embarking on a honeymoon phase when President Park Geun-hye attended a military parade in Tiananmen Square commemorating the end of World War II—the only U.S. ally to do so.

In July 2016, Seoul and Washington announced their decision to deploy the anti-missile system. China opposed the deployment, saying it undermined China’s security and would destabilize the region because its radars could be used by the United States to track China’s missile activities.

China wanted to “teach South Korea a lesson” for the effrontery of the THAAD deployment. Shortly after the announcement, Beijing banned the airing of Korean TV shows, films, and K-pop acts in China. After it was revealed that Lotte Group—a South Korean conglomerate operating 112 stores in mainland China—once owned the land THAAD would be based on, Chinese state media called for a nationwide boycott of the company. By March 2017, nearly half of Lotte’s stores on the mainland were shutdown, due to vague “safety violations.” That same month, Beijing banned its travel agencies from selling trips to Korea, resulting in a 66 percent decrease in Chinese visitors from last year. Shortly after President Moon Jae-in was elected to the Blue House in May 2017, he announced the suspension of further THAAD deployments until further review.

Many South Koreans told me they expected blowback from the decision to deploy THAAD, but the swiftness and intensity of Beijing’s retaliation caught them off guard. Beijing’s response to THAAD, they said, “opened our [South Korean] eyes to China’s true colors.” Simply put, they believed Beijing could not be relied on to consider South Korea’s interests if China’s interests were on the line. This disillusionment is fanning mistrust and has damaged China’s image in South Korea. A March 2017 Asan Institute poll found that, for the first time ever, Koreans had a more favorable view of Japan than of China. This was a shocking finding; Japan has consistently been South Koreans’ least favorite country after North Korea.

In spite of growing mistrust, South Koreans recognize the crucial role Beijing plays in reining in Pyongyang. Many interlocutors said they believed, in spite of THAAD, that Chinese officials wanted to maintain good relations with South Korea—albeit on China’s terms.

While Beijing should be concerned about its declining reputation in South Korea, Washington has even more to worry about. Many in Seoul see Washington backing away from its international obligations and believe American leadership is in decline. President Trump’s swift withdrawal from the Trans Pacific Partnership (TPP), his complaints about the U.S.-South Korea trade deficit, and his calls for Seoul to pay more of the costs of having U.S. military forces in South Korea have reinforced these perceptions. Some South Koreans expressed concern that Washington would act in ways that were detrimental to their national interests, such as carrying out a strike against the North without first consulting Seoul or inadvertently escalating tensions and not following through on security commitments. This uncertainty is exacerbated by the inconsistent and sometimes inflammatory statements coming out of the Trump White House and Twitter handle. China may have showed South Koreans its “true colors,” but, for many, a declining, disengaged, distracted America is more destabilizing than an assertive China.

This view has led South Koreans to call on their leaders to be more active and independent in dealing with North Korea. Following the July 29 ICBM launch by Pyongyang, President Moon announced that he would initiate talks with the Trump administration on allowing Seoul to build up its own ballistic missile capabilities to counter North Korea. On August 15, Moon approved the installation of the remaining four THAAD missile launchers. Some in Seoul are even considering developing their own nuclear arsenal to deter an attack from the North.

South Koreans are frustrated over the lack of creative solutions from Washington and Beijing and deeply resent being used as a pawn in a U.S.-China regional competition. U.S. strategy towards the Korean peninsula tends to posit it as a barometer (and at times a subset) of Sino-U.S. relations. In response to North Korea’s July 29 ICBM test, President Trump tweeted: “I am very disappointed in China. Our foolish past leaders have allowed them to make hundreds of billions of dollars a year in trade, yet they do NOTHING for us with North Korea, just talk…China could easily solve this problem!” This approach dismisses South Korean perspectives and overlooks fundamental factors underlying the North Korea issue. It’s time for Trump to do some Seoul searching.

Sandy Pho is a Senior Program Associate for the Kissinger Institute on China and the United States (KICUS) at the Wilson Center.