Space Wars: Why the Air Force and Navy Will Fight For Control of the Space Corps 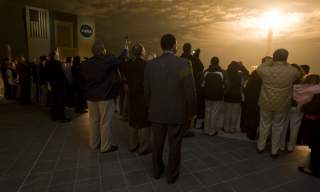 Matt Hipple should be commended for making a very astute observation about the future of military space operations. Visions of future sustained operations in space do indeed resemble classic naval operations at sea. Virtually every single work of science fiction in film or print describe their space military as a space navy. NASA and commercial plans for lunar industrial parks or Martian colonies cannot help but draw comparisons to Europe’s maritime expansion—and the navies that allowed those expansions to take place.

I agree with Hipple’s suggestion that mature space operations are “clearly naval operations.” I also sympathize with his view that only a naval culture is compatible with the United States’ long-term space needs. Where Hipple goes wrong, however, is when he claims “the Air Force lacks the particular mentality and expertise necessary” to accomplish these advanced space missions and, consequently, that space “belongs to the Navy!”

Hipple’s error is subtle but serious. It can be stated clearly. There is a great difference between the military space forces adopting a naval culture and federal government giving the “space mission” to the U.S. Navy.

In a November 2015 article, Air Force General John Hyten, now commander of U.S. Strategic Command, concluded that “improving [U.S.] situational awareness [in space] and operational mindset in order to effectively control [space] when needed” to “support joint missions worldwide” is an “Airman’s responsibility—and an Airman’s story.” Unfortunately, there is some evidence that maintaining and defending space support to joint military operations is the maximum extent of space interest in the corporate philosophy of the Air Force.

While the Air Force has provided some support to emerging space companies, such as SpaceX and others, that support is generally limited to use of facilities and interest is little more than in lowering launch costs for traditional Air Force missions. SpaceX plans to colonize Mars and other corporate plans to mine asteroids are of as much institutional interest to Air Force Space Command as they are to any other military organization—namely none. As Hipple argues, a space navy is not needed in a far future of manned spaceships, a naval mindset is necessary to understand the changes occurring in space now.

But what Hipple doesn’t understand is that while the larger Air Force culture may not be equipped to handle these changes, a subset of airmen (Air Force civilians, contractors and uniformed personnel) from the space culture are well aware of the necessity of adopting some—or all—of the naval culture. Although there is by no means a universal agreement that the Air Force space culture must transition to a more naval mindset, almost all advanced space thinking—overwhelmingly the product of airmen—have drawn heavily from naval history, theory and tradition.

It may surprise most, but military science in the Air Force has considered a maritime culture for space forces for almost twenty years. In 2000, Air Force Lt. Col. Cynthia McKinley argued that most military space missions, both current and anticipated, were support missions that bared a very strong resemblance to the U.S. Coast Guard and offered the U.S. Space Guard as a model space organization for the twenty-first century (sorry Hipple, but coasties deserve more than a hat-tip). McKinley’s idea is alive and well, but attempts to add conservationist missions to Air Force doctrine, such as orbital debris mitigation and collision avoidance in space (directly analogous to Coast Guard missions), have so far been ignored or couched in the more comfortable Air Force term “space situational awareness.” The Global Positioning System is perhaps the most critical space infrastructure the Air Force wants to defend for the joint force, but the service considers satellite navigation such as GPS as Space Force Support instead of its true character, the vastly more logical and inclusive maritime-friendly description “Aid to Navigation.” Even if it is not universally accepted, there is a strong case that in order both to develop and embrace its holistic space mission, the space forces need to adopt a maritime organizational culture, just as Hipple argues. However, airmen—not the U.S. Navy—are at the forefront of that debate.

What does have far wider support is the value of traditional naval thinking to military space thought. The three most comprehensive academic works on space-power theory derived from military studies. They include Everett Dolman’s book, Astropolitik, John Klein’s Space Warfare, and my book, Developing National Power in Space, which all borrow heavily from naval history and theory. Klein took his inspiration from the writings of Julian Corbett while I preferred U.S. Navy Rear Adm. Alfred Thayer Mahan and Rear Adm. Robert Wilson Shufeldt. Dolman, ever the iconoclast, tried to center his ideas on the land-power theorist Halford Mackinder, but even he couldn’t escape the very navalist economic expansion argument to explain why deep-space operations were so important to the future of the country. But even though these books reflect naval culture in their thinking, the fact remains that they are the product of airmen. Dolman was an Air Force civilian when he wrote Astropolitik and remains one to this day. I have served as an active-duty Air Force officer and in the Air Force Reserve. Klein wrote his book as an active-duty naval officer, but is now a contractor on the Air Force Secretary’s space staff. These books have also been textbooks for Air Force professional military education. From organizational debates to descriptions of the space environment, the greatest proponents of applying naval culture to space have been airmen.

But what of that science-fiction staple that Hipple offers as his closing argument in favor of U.S. Navy organizational superiority, the spaceship? Again, history offers some perspective. The only serious Department of Defense program to develop, build and operate anything that resembles the popular conception of a spaceship was Project Orion which ran from 1957 to 1965. It was a remarkably visionary effort to launch into orbit a spacecraft weighing as much as a World War II light cruiser with dozens to hundreds of crewmen using the power of miniature nuclear bombs. Although Robert McNamara’s Defense Department killed the project before it could enter its prototype stage, the project’s most ardent supporter was the airman who commanded the most fanatic organizational example of Air Force zealotry—Strategic Air Command (SAC). SAC’s third commander in chief, Gen. Thomas S. Power, has been described as the ultimate air-power absolutist, and yet he championed Orion—which looks and operates far more like a ballistic-missile submarine than a bomber—as SAC’s future in space.

General Power himself never mentioned Orion as the harbinger of a new navy. He saw Orion as a way to keep SAC nuclear alerts airborne (well, spaceborne) indefinitely, though he supported Orion for its potential for American economic expansion into space as well. But Orion nonetheless enjoyed a great deal of direct naval influence. The man who convinced Power of Orion’s potential in the early 1960s, nuclear weaponeer and Air Force Capt. Donald Mixson, served as a U.S. Marine in World War II. Even though he pitched Orion as a SAC bomber, his concept of operations exhibited a great deal of unacknowledged—and perhaps subconscious—naval thinking. However, Mixson’s friend and fellow Air Force captain, Frederick Gorschboth, wrote a more detailed concept of operations that envisioned Orion fleets mining, blockading and gaining control of space in true Mahanian fashion. That makes sense given that young Captain Gorschboth had only a few years prior graduated from the United States Naval Academy. But even though there may have been significant naval influence in the first attempt to build a spaceship, like those seen in movies, the supporters of that venture were nonetheless all airmen.

These examples serve as a positive case that airmen involved in the Air Force’s space subculture appreciate and often champion adopting varying amounts of naval culture to correctly address the myopia from which the larger pilot-driven Air Force culture suffers when considering space operations, the situation that Hipple correctly diagnoses. However, a strong negative case exists that Hipple’s prescription—giving the space mission to the U.S. Navy—is a recipe for disaster.

The first article the author remembers reading on space organization was by Navy Commander and submarine officer William Toti in the April 1995 issue of Proceedings Magazine titled “Who Needs the Space Command?” In the article, Toti argued that “the Air Force still lacks a positive identity in space” and recommended the Air Force space stovepipe be smashed by eliminating the unified combatant command, U.S. Space Command, and distributing the various defense space missions throughout the services, with the Navy gaining space communications and navigation. Toti thought eliminating U.S. Space Command was critical to “breaking up the space mafia” and thus enabling the United States “to resist the inclination to field space systems where cost-effective alternatives will do.” Toti concluded that “we need to begin to view space in proper terms—as a place that provides significant force enhancement but where no military operations are conducted.” That sentiment is very similar to General Hyten’s more current assessment.

U.S. Space Command was disbanded in 2002, and the “space mafia” lost its unified combatant command and its ability to forcefully argue for space development, much as Toti hoped for. Fifteen years later, Congressman Mike Rogers’ additions to the House’s FY18 National Defense Authorization Bill, which prompted Hipple’s original article on the U.S. Space Corps, also attempts to partially remedy Toti’s disastrous recommendation by re-establishing U.S. Space Command as a sub-unified command under U.S. Strategic Command. One suspects Rogers shaped his mark that way because re-establishing U.S. Space Command as a full unified combatant command would have generated too much resistance. Still, it is likely Rogers supports the sub-unified command specifically for its value to champion space programs in a joint environment. After submitting his mark, Roger’s quipped that Space Corps and U.S. Space Command was necessary because the current space-organizational structure “got us into the situation where the Russians and the Chinese are near-peers to us in space,” presumably because the system managed to resist advanced space development for over fifteen years—just as Toti had hoped for—while Russia and China have used America’s pause to develop at an extraordinary pace. Bravo Zulu, Commander! There is no reason to believe that the Navy would be better stewards of space than the Air Force has been, and Toti’s argument is but one example of how the Navy would be far worse.