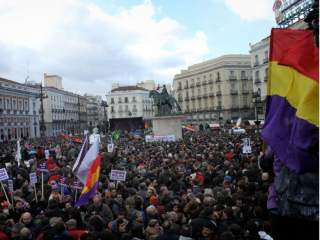 The Spanish people voted on Sunday—and produced chaos. They brought an end to the two-party system that has effectively been in place since the post-Franco transition to democracy, but did so without producing an obvious, workable alternative.

As foreshadowed by last year’s elections to the European Parliament and May’s regional and local elections, Spain’s two traditionally dominant national parties were reduced to shells of their former selves. The center-right Partido Popular (PP) of incumbent Prime Minister Mariano Rajoy, while remaining the largest party, went from garnering 45 percent of the vote in 2011 to 29 percent this time around. This is its worst score since 1989, the first year in which the PP competed under its current banner.

A loss like that would normally imply a big win for the main opposition party, the center-left Partido Socialista Obrero Español (PSOE), but no. The PSOE received 5.5 million votes, or 22 percent, down seven percentage points for its worst performance ever (unless you want to count pre–Civil War elections). That is a joint total of 51 percent of the vote for the two largest parties, a massive drop from the more than 70 percent that PP and PSOE had been jointly receiving for the past few decades.

None of this is necessarily surprising or unmerited. Spain has been going through a protracted recession (depression?) for years now, and while an ever-so-slight recovery started in 2013, unemployment is still over 20 percent, with youth unemployment hovering around 50 percent. Frustration about austerity in the straightjacket of the euro has led to large shifts all over southern Europe, and in a sense, Spain was overdue. Meanwhile, the widespread corruption of the Spanish political class (la casta—what Senator Cruz would call the Madrid cartel) has been more exposed than ever, tarnishing a wide range of prominent establishment figures, from members of the Royal Family via former IMF head Rodrigo Rato to former Catalan president Jordi Pujol.

It is not surprising, then, that the people started looking for purity, be it of the ideological or the ethical variety. All of those seats the PP and PSOE lost, and then some, now sustain two new parties with nationwide appeal. In parallel to developments elsewhere in southern Europe (Greece, Italy and Portugal come to mind), the shift was mostly leftward. The ponytailed Marxism of Podemos appealed to almost as many voters (21 percent) as the PSOE’s blander rendition, while the refreshing but inexperienced centrists of Ciudadanos performed worse than predicted by practically all opinion polls, but still managed to get 14 percent of the vote. Together, these two new parties are likely to play a crucial role in what comes next, as the PP will not control enough seats to govern either alone or with the support of a few small regional parties, as has been customary in Spain during the modern era.

Instead, there is a number of potential convoluted coalitions involving different combinations of the four large national parties, and no one knows as yet which one, if any, will materialize. The problem is not just that even the largest faction in the lower chamber of the Cortes, the PP with 123 of 350 seats, will be relatively small in a system designed for a dominant largest party; it is that the full distribution of seats does not lend itself particularly well to realizing some of the most logical potential coalitions. PP and Ciudadanos, a modern center-right coalition? Their combined 163 seats fall well short of the magical number, 176. PSOE and Podemos, Chavismo without oil? 159 is not enough either. A grand coalition of PP and PSOE, the only two-party coalition with a majority? Unthinkable given the abyss of history and ideology separating the two, and ruled out by Pedro Sánchez, the PSOE’s leader, who appears to despise Rajoy. PSOE, Podemos and Ciudadanos, a broad anti-PP coalition? Ciudadanos leader Albert Rivera had ruled out governing with Podemos, and believes that the largest party should govern. PP, Ciudadanos and Podemos? A Cruz-Sanders third-party ticket is more likely.

There is a number of small parties, mostly of the regionalist or separatist variety, that could lend their (tacit) support to a coalition involving PSOE and Podemos. But the larger the number of parties involved, the greater the number of cleavages that need to be bridged. There is the left-right divide, of course, and the new-old divide that mirrors to some extent the urban-rural divide. But PSOE and Podemos would need the support of at least some Catalan separatists, which seems unlikely to be forthcoming without the PSOE assenting to a referendum on independence—something Podemos already promised during the campaign. But such a referendum cannot, in principle, be held without constitutional reform, which requires a supermajority that the PP can keep from materializing.

If this all sounds a bit messy, it’s because it is. The sudden emergence of broad agreement, on issues ranging from the fundamental organization of the state to electoral system reform, and the introduction of more elaborate checks and balances, is the only real alternative to gridlock followed by new elections.