Spain's Catalonia Crisis Will Only Get Worse 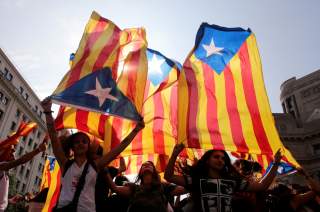 There was no referendum in Catalonia this Sunday, the Spanish government proclaims, just like the Americans are not even within one hundred miles of Baghdad. They are not in any place. They hold no place in Iraq. This is an illusion . . . or so Spanish prime minister Mariano Rajoy has proclaimed.

Yet there was, of course, a referendum, a poll, a vote, an election, whatever you want to call it—it did happen. Millions of people participated, tens of thousands engaged in civil disobedience to make it possible, and hundreds—or at least dozens—suffered police-inflicted injuries as a consequence. And there will most likely be a unilateral declaration of independence by Catalonia’s regional president, Carles Puigdemont (if he is not arrested before doing so).

It was not, however, binding nor was it a recognized referendum under Spanish law, and that is the single argument the Spanish government has been pushing since the Catalan regional government announced that it would hold another referendum on independence. Spain’s executive branch and judiciary intervened aggressively to keep the poll from materializing. Government officials ordered the seizure of ballots and boxes and a range of criminal investigations of regional and local elected officials.

The Spanish government is not wrong in making that argument, legally speaking. The Spanish constitution does not let regional governments call referenda on independence, or declare independence unilaterally. The current Catalan government supports those things and that the parties that support it ran on independence in the Catalan regional elections two years ago explicitly, but that does not change the facts. Those parties only received 48 percent of the popular vote. But, as we all know, you don’t need a majority of the popular vote to win an election. Also, those parties do hold a majority of the seats in the regional parliament.

Politically speaking, Prime Minister Rajoy is not wrong in making this argument either. His base and his Partido Popular party are quite comfortable with the idea of a unitarian Spanish state, and skeptical of—if not outright hostile toward—the so-called historical nationalities for which the Catalans and Basques are best known. If anything his position, even taken to the next step of suspending Catalan home rule, will divide the largest opposition party, the social-democratic Spanish Socialist Workers’ Party (PSOE).

Internationally, the Spanish government finds itself in a strong position as well. The Catalan push for independence, while generally portrayed sympathetically in the media, has not received the backing of foreign governments or international organizations. France and Germany will not call on Spain to recognize L’Estat Català next week, and such a state will not become an EU member state anytime soon.

All that said—and all that is certainly key to what will happen in the next weeks—it would be a mistake for Spanish nationalists to dismiss this sustained push for independence as just another sign of populist discontent or as purely irresponsible behavior by Catalan politicians. There is some of that, of course. It is almost certainly not a coincidence that the deep recession Spain went through this past decade triggered the first real push for Catalan independence since the 1930s. And the behavior of Catalan leadership has been more millenarian than we like to see in Western Europe these days (the UK excluded). Those two factors do not change the fact that much of the Catalan establishment has embraced the shift toward secessionism, a position touted only by a radical minority in the early 2000s. The traditional moderate, center-right Catalan nationalism of incremental increases in autonomy is dead. At this point it is much harder to imagine a pro-union governing coalition in Catalonia than one would think based on the split in the Catalan parliament, as the Partido Popular and the non-separatist communists of Catalunya Sí que es Pot are absolutely incompatible.

None of this is going to be massaged away by Madrid. Prime Minister Rajoy has not presented a positive case for Spanish unity or what its national identity should look like. King Felipe chose an unapologetic tone when he addressed the nation earlier this week. For cultural and historical reasons, it should be easier for the PSOE to develop and present a framework for a pluriform, heterogeneous Spain, a Spain that is E pluribus unum instead of una y eterna. But their recent electoral fortunes, like those of their comrades all over Europe, have been subpar, and there are significant differences of opinion within that party as well. In addition, any fundamental reform will have to be grapple with the same constitutional constraints that impeded the full implementation of the most recent expansion of Catalonia’s statute of autonomy.

Confrontation it is then, with the Rajoy administration unwilling to entertain the idea of international mediation, hoping that it all just goes away. What is life? It is a frenzy, an illusion, a shadow, a delirium, a fiction. The greatest good is but little, and this life is but a dream, and dreams are only dreams. That appears to be Rajoy’s thinking; that he will wake up tomorrow and it is all over, the Catholic Monarchs resuscitated.

Stan Veuger is an economist at the American Enterprise Institute.