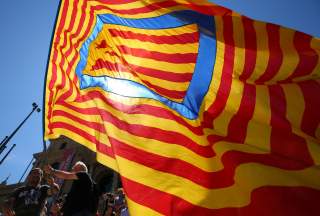 These are uncertain times for the European Union. The economic and political consequences of Brexit are still unforeseen. The rise of far-right populist parties in several countries—even if contained, as France most recently has shown—is normalizing extremism in political discourse.

Secessionism is another reason of uncertainty. Scottish nationalists lost the independence referendum in 2014, when 55 percent of voters opted to stay within the United Kingdom, but Brexit has spawned talks of a second independence vote in overwhelmingly pro-EU Scotland. The stakes also run high in Catalonia, where the region’s pro-independence government set October 1 as the date for a referendum on independence from Spain—a referendum the central government considers illegal. Madrid’s reluctance to negotiate with Barcelona is leading the country to an unprecedented constitutional crisis.

The EU has repeatedly discouraged the secessionist aspirations of Catalonia and Scotland by claiming that, in case of independence, both would lose their EU membership and be forced to apply from scratch. Like the EU, the United States has insisted that the conflict between Barcelona and Madrid is a Spanish internal issue and that it is not the role of foreign countries to lobby for Madrid to open constitutional negotiations with Barcelona. In 2015, then President Barack Obama expressed the U.S. position when he stated that the United States was “deeply committed to maintaining a relationship with a strong and unified Spain.” The Trump administration has yet to weigh in on the issue.

The current international acquiescence in favor of Madrid’s position is doing nothing to help resolve the secessionist crisis in Spain. Opinion polls have consistently shown that nearly 80 percent of Catalans—regardless of their personal views on independence—believe that there should be a vote on the issue. Instead of ignoring the peaceful demands of the Catalans, the United States and the EU should play a more active role in helping the two parties end the stalemate and negotiate a democratic solution.

Madrid’s hardline opposition toward demands to expand Catalonia’s autonomy is a major reason why support for independence has skyrocketed in recent years. Catalonia comprises one sixth of Spain’s population and represents around a quarter of the country’s gross domestic product. Many Catalans believe that the region contributes too much to the central government’s budget and doesn’t get enough investment in return, particularly when it comes to public infrastructure like rail and roads.

Most importantly, the region has its own different language—Catalan—and many people share a strong sense of a differentiated national identity from the rest of Spain. It is the denial of the legitimacy of this unique Catalan identity, as seen in Madrid’s efforts to diminish the current role of Catalan as the main language in schools, that has radicalized many Catalans previously uninterested in independence.

In the United Kingdom, demands by the people of Scotland for a referendum on independence led to a negotiated solution between London and Edinburgh that resulted in an orderly referendum whose result was accepted by all parties. By contrast, in spite of the growth of support for independence in Catalonia, the Spanish government has not made a single move to discuss how to hold a vote legally or devolve more power to Barcelona.

Unsurprisingly, the central government’s inability to compromise pushed even more Catalans to embrace independence, with support jumping from 15 percent in 2010 to around 50 percent in 2015. Pro-independence parties ran on a platform of moving toward independence if they obtained a majority in the 2015 regional election, but even though they secured a majority of seats in parliament, they just got 48 percent the vote.

Lacking a clear democratic mandate to declare independence, the Catalan nationalists’ next move was to call for a referendum on the issue. The referendum is being cast as the ultimate practice of democracy: the way for Catalans to decide whether to be part of Spain or not is through a vote on the issue. However, if the vote proceeds on October 1, it would be unconstitutional according to the Spanish government because the constitution establishes the “indissoluble unity of the Spanish Nation.” Madrid insists that the people of Catalonia can’t vote on independence by themselves because this decision belongs to the Spanish electorate as a whole, and that there can be no democracy without the rule of law.

Spain’s central institutions are acting to prevent any independence vote taking place in Catalonia, including by banning all the Catalan Parliament’s resolutions affirming Catalonia’s right to self-determination and taking legal action against pro-independence Catalan politicians. This year, a Spanish court fined and banned former Catalan prime minister Artur Mas from serving in an elected office for holding a nonbinding vote on independence in 2014, sending a warning signal to Catalan politicians. More ominously, particularly in a country with a history of authoritarianism, Mariano Rajoy, the Spanish prime minister, stated that the government would use “all the means within its reach” to stop the referendum. Other senior Spanish government officials have argued that the referendum would be a “coup d’état.”

No one is interested in the Spanish army or police preventing the people of Catalonia from voting. The most plausible scenario is that the vote will go ahead somehow, but won’t have the widespread legitimacy it needs. First, given that anti-independence parties have encouraged their supporters to boycott the referendum, it is likely that many of them will stay away. Second, there are concerns about the organization of the vote, including how the electoral registry is going to work, since it is now managed by the Spanish government. Madrid has also challenged in court the Catalan government’s purchase of ballot boxes. Third, the Spanish government will certainly not accept the result if it favors Catalan independence.

A win for the independence camp—even given all the caveats listed above—will energize the pro-independence movement. Catalans overwhelmingly support holding a referendum to settle the question of independence. But instead of presenting a positive case for being part of Spain’s future, the central government is insisting that it is not for the Catalans to decide what their future will look like. This is counterproductive and ill-advised. Support for independence is not going to just magically vanish, as Madrid seems to think.

Constitutional negotiations should be opened on whether to have a vote legally to settle the issue once and for all. In parallel, Catalonia should be offered more regional powers, especially on economic matters, to show independence backers that their demands are being heard and to give them a positive incentive for Catalonia to remain part of Spain. These measures would go a long way to signaling that Madrid recognizes Spain’s internal national diversity and respects meaningful regional self-government. If such proposals were on the table, there is a chance that support for Catalan independence would not prevail at the ballot box. Instead of engaging in scaremongering, it is the ultimate responsibility of the Spanish ruling elites to make a positive case for Spain. The EU and the United States should encourage the politicians in Madrid to do so.

David Martí is a DC-based political analyst who holds a PhD from the University of Edinburgh. He tweets at @davidmarti70.