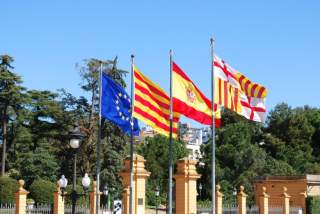 Spain woke up on Monday to confirmation that its relatively stable two-party system of the past thirty-five years had been fundamentally transformed. In last year’s European elections, the center-left Socialist Workers Party (PSOE) and the center-right People’s Party (PP) saw their joint vote share reduced from close to 80 percent to just about 50 percent. This Sunday’s elections for all of Spain’s municipalities and thirteen of its seventeen regional governments produced a similar shift: a devastating loss for the governing PP (down from 37 percent to 27 percent) combined with big gains for the hard left of Podemos and the good-governance centrists of Ciudadanos.

The move toward these still radically new parties was as dramatic compared to the results from four years ago as it was unsurprising. Last year’s European Parliament results foreshadowed this week’s outcome at home.

In addition to changes in its political system, Spain has now suffered through seven years of crisis. Unemployment rates are still at more than 20 percent and youth unemployment hovers at a little over 50 percent. Although those numbers have improved slightly since mid-2013, the sheer length and depth of the Spanish Great Recession—or depression—have been devastating, wiping out the life savings of hundreds of thousands while crushing the dreams and aspirations of an entire generation.

It is that generation—the millennial generation—that has mostly abandoned the traditional parties and that has been the driving force toward what one could generously and perhaps justifiably see as long-overdue democratic renewal. The Spanish ruling class has a long track record of miserable ethical failure, and the current times of deep economic trouble may well turn out to be the straw that breaks the camel’s back.

Just a month ago, Rodrigo Rato, a former PP finance minister and head of the IMF, was arrested for fraud, tax evasion and money laundering. Last summer King Juan Carlos abdicated, overwhelmed by scandal. And it’s not just the leading figures of national politics; another topic of major controversy during the past year or so has been that of the personal finances and staggering corruption of Jordi Pujol, the longtime leader of Convergència i Unió, president of the Catalan regional government and face of Catalan nationalism.

It’s time for a change. It is all well and good for the ruling elites to benefit from generalized prosperity, but in Spain, they got caught with their hands in cookie jars everywhere during a time when many Spanish were suffering through no real fault of their own.

Some of the most high-profile stories of human tragedy during this period involved renters who were forced onto the street and homeowners who were foreclosed upon. And these were not homeowners who walked away from their mortgages; nonrecourse mortgages are practically nonexistent in Spain. Many of those who lost their jobs during the crisis and who purchased homes during the housing boom that preceded now face insurmountable life-long debt overhang problems, leading some of them to commit suicide in highly visible ways.

It was as a spokesperson for those who were losing their homes that Barcelona’s likely new mayor, Ada Colau, first came to prominence. She is a former squatter herself, and an antiglobalization and anti-G8 protester before the war in Iraq became a thing. She is also the leader of Barcelona en Comú, a citizens “platform” that is the local rendition of Podemos, as well as the political party that won the local elections in Catalonia’s capital this weekend. Vaguely inspired by Hugo Chávez’ Bolivarian socialism and led by Marxist political scientists, Podemos is the organized version of the Indignados movement, the Spanish Occupy. It is now the second-largest party in Madrid, and the largest party in Barcelona, Spain’s two biggest cities. Based on historical precedent, it seems unlikely that a total lack of experience combined with an agenda marked by a preference for exhaustingly lengthy assemblies will lead to much good or even a steady supply of basic goods like toilet paper, but letting a party like this show what it’s worth at the local level seems prudent in light of experiments like what I would call the Syriza farce, if it weren’t a tragedy.

Whether Ada Colau and her buddies will get the chance to govern is still somewhat up in the air. The large-scale fragmentation of Spanish politics has led to an unprecedented number of hung city council and regional legislatures, and even last Sunday’s winners will have to build alliances to end up as mayor or president of a regional government. The PP, for example, has lost all of its regional absolute majorities, and will have to pact with other parties everywhere. Will that be easy?

Andalusia, a region in southern Spain, held its elections in March. Two months later, no one has managed to secure the majority vote required to become the president of the Junta. That said, a little more of those checks and balances might not be a bad idea, and perhaps an idealistic coalition partner is precisely what PP and PSOE both need.

That way, hopefully, the slow but steady Spanish recovery can continue, and by the time Spain celebrates its next general elections in November or December, we will see a sliver of optimism. We better, for it has been much too long.