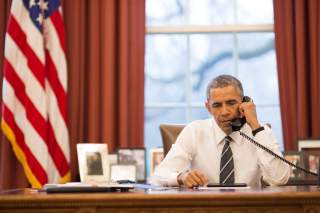 One need not admire Benjamin Netanyahu or Vladimir Putin or, for that matter, approve of Israeli or Russian conduct, to see Barack Obama’s recent efforts to punish the two states for what they really are. Indeed, Mr. Obama’s efforts seem directed more at his successor than at any serious U.S. foreign policy objective. The outgoing president’s efforts to tie President-Elect Donald Trump’s hands in both domestic and foreign policy appear particularly un-presidential after his petulant complaints that America should have only one president at a time—a rule he apparently sees as applying in only one direction as he defiantly disregards the deference typically shown to an incoming commander-in-chief.

On Israel, Mr. Obama had to know that America’s abstention in voting on a United Nations Security Council Resolution critical of Israel would neither change Israeli settlement policy nor undermine Prime Minister Benjamin Netanyahu’s political standing in his country. He should also have known that the move would not improve U.S. relations with Arab states, both because Mr. Trump stated that he would block UN sanctions on Israel and because the Arabs themselves are increasingly preoccupied with Iran and Islamist extremism and, accordingly, care much less about the Israeli-Palestinian peace process today than in the past. On the contrary, if passing an anti-Israeli resolution nurtures false hopes among Palestinians and their international supporters, then the Trump administration’s almost inevitable reversals could fuel new anti-U.S. resentment, terrorist attacks, and American deaths.

Moreover, while President Obama is pretending that his representatives at the United Nations have done nothing more than to abstain during a Security Council vote, important evidence supports Mr. Netanyahu’s claim that the administration went well beyond that. Draft resolutions do not simply appear on the Security Council’s agenda; U.S. officials reportedly had repeated opportunities to block the resolution from coming to a vote, to lobby other governments, and to soften the text. That they made no meaningful effort to intervene at any point illustrates starkly that this was an intentional effort at personal payback by an outgoing president against an Israeli leader whom he apparently despises. This petty score-settling—without accomplishing anything useful and quite possibly at the expense of U.S. national security—makes Mr. Obama look pathetic and vindictive rather than tough or purposeful.

The same is true of President Obama’s new measures to punish Russia, which his administration describes as a response to Russian hacking of the Democratic National Committee and some other American individuals and organizations as well as Russia’s broader interference in the U.S. political process. The issue is not whether Russia has engaged in hacking or espionage in the United States—it almost certainly has. The real question is why Moscow’s conduct has so shocked him. After authorizing millions of dollars in U.S. government spending to shape Russia’s domestic politics, explicitly targeting Mr. Putin’s close associates and supporters with sanctions, and personally criticizing the Russian leader, did Mr. Obama really think that Russia would not look for a way to retaliate in kind? Cyber-intrusions and intelligence gathering in foreign nations are hardly alien to America’s security services. The lack of moral equivalence between U.S. policies to promote freedom in Russia and Russian attempts to interfere in America’s democratic process is no excuse for his blindness.

Another question is why Mr. Obama had to respond to Russia’s behavior at this late point in his presidency. According to President Obama, Russia’s political hacking has stopped. He has not presented any evidence—or even any claims—that Moscow affected the outcome of the U.S. presidential election. This suggests that Russia’s actions were not that significant. In that case, why not allow investigations to proceed and leave the matter to President Trump and the next Congress?

Conversely, if Russia’s transgressions were so severe that they required an immediate response, why has the Obama administration done so little? Forcing thirty-five Russian diplomats to leave the country and shutting down two recreational facilities will hardly damage Russia or compel Mr. Putin to change his ways. Nor will this substantially diminish Russia’s intelligence-gathering capabilities in the United States beyond the short term.

In fact, some proposed shutting down these very facilities to President Ronald Reagan after the Soviet Union shot down South Korean passenger jet in 1983. Mr. Reagan, who was quite effectively fighting Soviet expansionism, disregarded this advice because he saw depriving diplomats of their recreational facilities as not only petty but inconsequential. Not so Mr. Obama, who criticized Governor Mitt Romney’s harder line toward Russia in the 2012 campaign by saying that the 1980s were calling and wanted their foreign policy back. At least Mr. Romney was looking to Cold War policies that worked; President Obama has instead chosen the discarded leftovers.

What President Obama has actually done is to try to use excessively dramatic rhetoric to camouflage a remarkably weak response. For two years, his administration has carefully avoided sanctions that might actually affect Russian behavior, such as sanctions on the Russian Central Bank and other pillars of Russia’s financial system. Steps like this could impose serious costs on the Russian economy and on Mr. Putin’s ability to govern. Instead, Obama has opted to sanction senior officials in Russia’s military intelligence agency (known as the GRU) and its internal security agency (the FSB), who are allegedly responsible for the election-related hacking. Since Russian intelligence officials are highly unlikely to travel to United States in the current environment—and would be crazy to have any property here—these sanctions are strictly symbolic.

Worse, sanctions like this may well impose greater costs on the United States than on Russia by stymieing counter-terrorism cooperation. Poor communication between Russian and American intelligence agencies has already facilitated terrorism on American soil by the Tsarnaev brothers, who carried out the Boston Marathon bombing. With this in mind, President Obama’s political grandstanding poses real risks to the lives of American citizens in exchange for little if any foreign policy or national security benefits. His cavalier behavior is perhaps most telling in confirming what many have long suspected; namely, that Mr. Obama has systematically sought to minimize the danger of Islamist extremist terrorism because he doesn’t want to pursue the policies that acknowledging the risks would require, including anti-terrorist cooperation with Israel, Russia, and other governments he may prefer to ignore as well as a variety of other domestic and foreign policy measures.

Indeed, all that Mr. Obama has managed to do is to look angry and ineffective—something that Putin’s restraint only highlights. President-Elect Trump was right to promise to meet with intelligence officials to get a full briefing on Russia’s hacking. However, he is also right to express healthy skepticism toward what he has heard so far from intelligence agencies politicized by the Obama administration and its predecessors. It is already clear that some in the intelligence community have overstated both the unanimity of the community’s conclusions as well as the level of certainty behind claims that Russia’s president personally ordered steps to facilitate Mr. Trump’s election. As a former head of the CIA’s Russia analysis recently wrote, this is no “slam dunk”. Others have likewise questioned the scope and intent of the Russian effort.

At the same time, it is less clear why the mainstream media should be so offended by Trump’s reference to the intelligence failures that led to the Iraq war when one of Trump’s principal accusers—Hillary Clinton advisor and former acting CIA Director Michael Morrell—himself apologized publicly to former Secretary of State Colin Powell for the intelligence community’s erroneous assertions about Iraq’s weapons of mass destruction. Morrell is now out of government, but it is no secret that others in the national security and foreign policy bureaucracy share his attitude. This is not a reason for President-Elect Trump to ignore the intelligence community’s conclusions, but it is definitely a reason for him to evaluate them carefully and to reach a final decision only after he can seek the judgement of his own appointees.

More broadly, Israel is one of America’s most important allies and Russia is one of its most important rivals. Each is thus central to U.S. national security—and dealing with either requires serious analysis, rigorous assessment of U.S. priorities, and careful evaluation of the consequences of American choices. In his last hurrah, Mr. Obama sidestepped all three at his country’s peril.