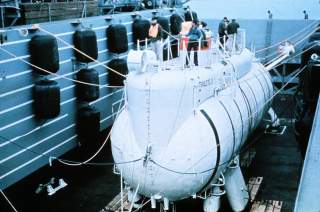 Seemingly ripped from the pages and screens of a geopolitical thriller, one of the Cold War's most incredible adventures stretched from outer space to the ocean floor, involved bus-sized satellites and deep-diving subs, and pulled together sailors, spooks and scientists into a secret new national capability.

On June 15, 1971, eleven years after the first spy satellite began taking its photos and the first submarine reached the bottom of Earth's oceans, a U.S. Air Force Titan III missile lofted a spacecraft the size of a Greyhound bus into orbit. The first of America's third-generation spysats, the KH-9 HEXAGON carried 33 miles of film and four recovery capsules to return it all to Earth. Its cameras and film stock could count the slices of a pizza from 100 miles up.

In those pre-electronic-imaging days, large film cameras aboard the spysats recorded stereo photos on special film which then spooled into bucket-shaped reentry vehicles. On command, the satellite ejected a bucket which reentered the atmosphere over the North Pacific, where a special USAF squadron out of Hawaii snatched the falling capsules by their parachutes.

This improbable system worked well enough to retrieve previous spysat film capsules, but HEXAGON's huge bucket loads—up to a ton of film—taxed the system. Although the first KH-9's first two buckets suffered parachute failures, the recovered film dazzled analysts. "My God," said one, "we never dreamed there would be this much, this good! We’ll have to revamp our entire operation.”

The third bucket hit the ocean going several hundred miles an hour and sank in over 3 miles of seawater. Its contents were valuable enough to warrant extraordinary recovery efforts. In a summary sent to the head of the National Reconnaissance Office (NRO), an Army officer noted: “The third RV contained the most imagery of the four…further, this imagery was acquired on that part of the mission when the weather was particularly favorable, especially in Western Russia and Eastern Europe.”

It seemed that 30 percent of the first KH-9's data was beyond reach. Or was it?

Shortly after the loss of the third bucket representatives from the NRO, the CIA's Office of Special Projects, the Navy's Deep Submergence Program and the Air Force met to consider recovering the capsule. Those were bold and daring times, when Americans walked the Moon and detente was an obscure diplomatic term. The Navy had its own inner space program ready to go, honed by a decade of public and covert experience.

During and after the 1963 USS Thresher disaster, the Navy developed powerful deep-ocean search and recovery techniques. The sea service used these techniques effectively in the search for lost H-bombs in 1966 and the USS Scorpion in 1968. It also had the only subs in the world capable of diving deep enough to reach the bucket. They were pretty weird subs.

Invented in the early 1950s by French ocean explorer Auguste Picard, the bathyscaphe (from the Greek bathys "deep" + scaphos "vessel") works like a blimp—it's actually a lighter-than-water dirigible.

In 1963 and 1964, the Navy employed Trieste I and its follow-on namesake Trieste II in the USS Thresher search and recovery efforts. In 1965, the Navy very secretly built a third bathyscaphe specifically for Project Winter Wind, a program to recover Soviet missile warheads from the deep ocean. The third bathyscaphe emerged from the shadows when it joined the search for the USS Scorpion. So classified it had no name, in true spook fashion it took another's—that of the second bathyscaphe. Hence, though the U.S. Navy possessed three such subs, there was only a Trieste I and a Trieste II.

Two civilian organizations, already deeply involved with classified activities, provided key expertise and cover. Eastman Kodak worked closely with the CIA and NRO in creating the film used aboard spysats and processing the film in secure facilities. Kodak technicians now undertook tests to see how the film might have survived immersion and pressure. The Scripps Institute of Oceanography, long a partner with the U.S. Navy, lent ocean search expertise and its name to the effort. The search for the KH-9 film bucket would look like a Scripps oceanographic expedition.

No one had ever tried to retrieve a smashed space capsule from 16,000 feet of seawater before, and preparations proved challenging. Since the condition of the bucket was unknown, the team chose to build a "hay hook" sort of open claw to grab the entire capsule and its contents. The hay hook attached to a large bracket on the bow of the sub and proved kludgy and cranky.

Unable to navigate far on its own power, Trieste II traveled aboard a converted WWII floating dry dock, White Sands, towed by the fleet tug USS Apache. While the little flotilla headed towards Hawaii, Scripps scientists aboard the Navy survey ship De Steiguer located the search zone north of Oahu and dropped transponders on the likeliest targets.

For what was an already challenging mission, the KH-9 film recovery project wrestled with more than its share of haywire. A dress rehearsal 4,200 feet down offshore from San Diego failed to recover a training bucket and lost the hay hook to boot. The transponders' locations turned out to be almost a quarter-mile off. Hunting for debris on the sea bottom drained the bathyscaphe's batteries and electronics failures forced early aborts.

To these troubles the sea added its ancient burdens. Weather repeatedly turned bad in the search zone, forcing the Apache at times to tow both the White Sands and the Trieste II in rough seas. The prospects of a collision between the drydock and the thin-skinned gasoline-filled bathyscaphe lurked behind every surge and bump.

At one point, senior officers called off the search until weather and equipment improved. Within the CIA, concern grew about possible Soviet recovery efforts. New estimates suggested the USSR could recover objects from as deep as 33,000 feet, and if the United States left, the search zone maritime law allowed other parties to move in. Apparently the Soviets did not probe the area.

On April 25, 1972, almost a year after the KH-9 bucket hit the Pacific, Lt Dick Taylor, LtCdr Mal Bartels and LtCdr Phil Stryker shut the hatch on their 16-cubic-foot steel sphere and sent Trieste II towards the bottom. Two hours later, 16,400 feet down, as their vessel glided above the ocean floor and Apollo 16 astronauts drove their rover on the Moon, the Trieste II crew followed a sonar contact to a large piece of debris. There in the lights, half-buried in the ooze, squatted a truck-tire-sized cylindrical object. It was the third bucket and film spool.

A dockside fix of the hay hook rendered it functional, but one-shot. Taylor, Bartels and Stryker had one chance to grab the film and it worked. After finding their target with little hassle, it looked like the mission's luck had finally turned. With its precious cargo clasped in its hay hook, Trieste II dropped tons of iron shot ballast and floated towards the surface.

But the good luck didn't hold. Twenty minutes into their ascent, the crew noticed chunks and streamers of material falling and dissolving off the film spool. Although the Trieste II stopped its ascent 100 feet below the surface to minimize swells, the film spool continued to fall apart. By the time divers raced to the sub and wrapped a cover over the salvage, almost nothing remained but a brownish cloud and a few strips of film. What little could be saved was found to be shattered by impact, soaked with seawater and exposed by the divers’ lights.

Although the KH-9 recovery mission failed in its primary mission, all the parties involved agreed on its operational success. The crews of the Trieste II, White Sands and Apache received a Meritorious Unit Commendation for “this singularly significant achievement” which “provided the United States Navy with the capability to conduct deep-ocean search, location, and object recovery operations in 80 percent of the sea areas on Earth.”

The invention of syntactic foam, a buoyant material made of tiny air-filled glass beads embedded in plastic, spelled the end of the bathyscaphe and its dangerous, fragile gasoline balloon. Trieste II entered retirement as a museum display at the Naval Undersea Museum. The last remaining KH-9 satellite, an engineering prototype, was to have become a centerpiece of the National Air and Space Museum's new exhibit space, but don't hold your breath waiting to see it anytime soon.

Deep-sea searches today cross the public consciousness when planes go missing, but deep-sea exploration draws less public attention than space exploration. We don't know what's happening in the dark deep, the secret waters where espionage, technology and the ocean meet. But surely it's just as full of improbable adventure as ever.