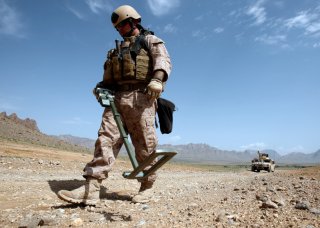 During a 2014 visit to Herat, Afghanistan, I visited the “Museum of Jihad.” For a historian, the visit provided significant insight into Afghanistan’s pressing unexploded ordinance problem.

The building, established under former governor Ismail Khan’s patronage, stood adjacent to a carefully manicured garden where large artillery pieces, crew-served weapons, and downed Soviet helicopters idled. On the ground floor, glass display cases showcased rifles and ordinance dating back to the Anglo-Afghan Wars of the nineteenth century. At the same time, other cabinets displayed mines dating back to the Soviet occupation. Elsewhere, photographs of the Mujaheddin, stories of their martyrs, and a large historical diorama wove together tales of victory. Any mention of the United States’ support was notably absent, which contrasted with exaggerated remarks of Iranian assistance.

Several months later, I talked to an American bomb disposal officer and told him of my visit. He said that the museum held special significance for another reason: Shortly after its opening, the American military had sent an emergency ordinance team after that learning the Afghans had not confirmed the deactivation of all the ordinance on display. As a result, bombs in glass cabinets were, shockingly, still live. The story was a testament to the sad fact that bombs and mines are lethal decades after initial deployment. Four months after Kabul’s fall, Afghans continue to die almost daily from improvised explosive devices (IEDs), the Taliban’s signature weapon.

In Washington, “Forever Wars” is a trendy turn of phrase, but the term is attached to literal consequences in Afghanistan. In Kandahar’s Arghandab district, forty people died due to IEDs this year alone. Further, people living in rural areas continue to suffer greatly due to IEDs or other unexploded ordinances, but unlike in urban regions, the rural areas lack a consistent reporting mechanism.

Indeed, the scale of this problem is immense. The Taliban laid thousands of IEDs and landlines across Afghanistan during their march to power but seldom mapped their deployment. Many Taliban members who laid the mines subsequently died fighting, taking their knowledge of the fields with them. In Arghandab, for example, locals and military analysts estimate around 1,000 Taliban died fighting, with the knowledge of mine locations disappearing forever.

Anger grows. Locals blame the Taliban for continued casualties. The Taliban want a solution. Not only because the Afghan people’s patience has grown thin, but also because IEDs and mines are blocking access to roads and farmlands which the Taliban need to avert what has now become the worst hunger crisis on the planet.

But there is a way forward. The Halo Trust, an Anglo-American non-governmental organization (NGO) founded in 1988, is the only NGO actively clearing IEDs in Afghanistan. Further, the NGO employs over 3,000 Afghans local hires to work daily to clear ordinance which allows for the cultivation and transportation of food, and enables other benefits, like letting children walk to school. Even better, it does not channel money through the Taliban, so funds are not siphoned off by the group.

Of course, that is not to say the Taliban have no involvement: Many of the Afghan deminers are former fighters (from both sides) or are displaced refugees. As such, a corollary advantage of HALO mine clearance operations is not only the decommissioning of fighters, but also reconciliation. Afghans may have been on different sides of the battle but working in tandem to clear explosives that do not discriminate between parties and groups builds bonds that transcend fighting.

However, the Halo Trust should not demine alone.

The U.S. State Department remains the largest funder of explosive clearance in Afghanistan.  But herein lies the irony: While U.S. taxpayers may contribute $20 million this year alone to clear Soviet-era landmines, the State Department’s Bureau of Political-Military Affairs has not altered its posture. Funding cannot be spent to clear explosives left over from the most recent conflict.

In effect, the State Department’s restriction does not treat the root cause and is akin to instructing a doctor to treat a hangnail when the patient also suffers a sucking chest wound. This restriction is not Secretary of State Antony Blinken’s fault as he inherited this issue from Mike Pompeo, who in turn inherited it from his predecessors.

Certainly, HALO does seek to map, mark, and clear recent explosive contamination, but a small consortium of European governments and private U.S. donors funds these efforts because the Political-Military Affairs Bureau has yet to update its Afghanistan demining guidance to take into account that it is the era of Hibatullah Akhundzada rather than Yuri Andropov.

President Joe Biden has promised a smarter, broader approach to counterterrorism than a traditional whack-a-mole strategy. For a relatively small investment in demining and a willingness to recognize that Soviet-era ordinance is not the primary problem, Biden and Blinken could mitigate a growing threat.

The Halo Trust told me that they could employ and equip as many as 5,000 Afghans with additional funding. This opportunity for Afghans to reconcile past tensions and solve current issues might provide an outsized return on the United States’ investment. It really should be a no-brainer, and one that both Democrats and Republicans can accept: the few million dollars Congress appropriates for landmine clearance should address the threats of today rather than those of the past.