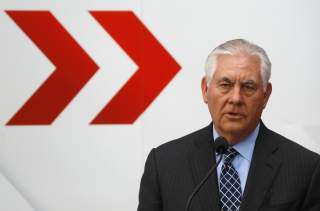 After Roy Moore’s loss in Alabama last week, Stephen K. Bannon, the president’s sometime consigliere and Breitbart News chief, is showing no signs of going quietly into that good night, despite the torrent of Schadenfreude evinced by his political opponents.

His latest effort—or act of political vandalism, for his opponents—will be to oppose the nomination of Susan Thornton, the Acting Assistant Secretary of State of East Asian Affairs who was formally nominated on Tuesday.

“The Breitbart crowd intend to highly contest Susan Thornton's nomination, as it stands in complete opposition to everything POTUS laid out” in the National Security Strategy, a source close to Bannon emailed me Tuesday night.

As I reported on Monday, the president’s National Security Strategy unveiled this week was seen as something of a coup for Bannon and many other China hawks (including President Trump’s uber-hawkish National Trade Council director). The document “reads like a Peter Navarro ‘Powerpoint’!!!”

This is not the first time Bannon has declared war on Thornton, telling The American Prospect’s Bob Kuttner in August: “I’m changing out people at East Asian Defense; I’m getting hawks in. I’m getting Susan Thornton out at State. . . . That’s a fight I fight every day here. . . . We’re still fighting. There’s Treasury and Gary Cohn and Goldman Sachs lobbying.”

But her nomination to take on the position officially is important on two counts.

CIA Director Mike Pompeo has emerged as the leading candidate to succeed Tillerson, and the White House has been limp in denying it. Speculation raged last month that Tillerson would forced be out by January or even New Year’s.

But in recent weeks, Tillerson has quietly pressed on, begging the question: is Tillerson, at this point, just daring Trump to fire him? The president appears wary of making outright enemies of the former ExxonMobil chief, a man with the entire Fortune 500 in his rolodex. The president needs large corporations to be helpful as he rolls out his tax plan, and martyring someone like Tillerson, less than a year into the job at Foggy Bottom, could even cut down on his family’s opportunities post-presidency.

I posed that question to a source close to Bannon, along with a text message that read “Has the president gotten cold feet or changed his mind on getting rid of him?” This person replied, incredulous: “I do—Thornton @ State!!!!!!”

Bannon and the president, of course, don’t always see eye to eye.

Bannon wanted a more nationalist-populist tax reform package—including higher rates for top earners, and cuts that more specifically helped Trump’s core supporters. As Kuttner put it in an email to me Wednesday: “Bannon is often speaking for just Bannon, not for Trump.”

But additionally, Tillerson’s potential staying power hurts Bannon’s ability to slide in other allies in the administration. Bannon sees Pompeo as a “full Jacksonian,” in his mold. And Bannon is also very fond of Sen. Tom Cotton (with a small caveat).

Cotton was slated to take over for Pompeo at Langley, in the original Tillerson ouster plan. “Cotton the best,” a source close to Bannon texts. “Although, still trying to wring out the neo-con in him.” Pompeo and Cotton are areas of overlap for ostensible enemies, Bannon and prominent neocons like William Kristol. Kristol’s history with Cotton is extensive, and The Weekly Standard founder told me last month Pompeo should consider running for president.

With regards to the State Department, Pompeo has been quietly recruiting candidates to join him, making this situation with Tillerson doubly strange.

One source in this orbit gives me a name; Juan Zarate, of the Foundation for the Defense of Democracies, is primed to come aboard as Pompeo’s deputy (should Tillerson leave). FDD has become something of the go-to think tank for the administration, especially on Iran. “There’s no secret here: I’m not an unbiased journalist. I’m a fan of this director. I worked on his transition,” said Zarate, at an October FDD event with Pompeo. “Frankly, I love the man.” Zarate was the inaugural assistant Treasury secretary for terrorist financing and financial crimes and later deputy national security advisor, during the George W. Bush administration.

The Thornton nomination will be opposed by “the Breitbart crowd,” as Bannon’s allies put it, for another reason: disagreement over the handling of the case of Miles Kwok, also known as Guo Wengui. As of this week, the Chinese businessman, who is deeply critical of the ruling Communist Party, remains in New York. “Still in NYC,” a source close to Bannon texts, his rendition being “Stopped because of the 19th Party Congress.”

But his case is “a ticking time bomb for U.S.-China ties in the Trump era,” as The Diplomat put it in October. “Guo, who also goes by Miles Kwok, is something of a celebrity in the China-watching world for the spectacular allegations he’s gradually unveiled and levied against many in China’s top leadership.”

Others view Guo as a potentially useful negotiating chip with the Chinese over the North Korean issue.

Bannon himself pointed me to an October Wall Street Journal article detailing the Guo case.

“Curt, I’ve got something better—go to WSJ piece on the rendition of Miles Kwok,” Bannon wrote. “Susan Thornton allowed it to happen.”

The choice of the word “rendition” is curious—implying a pending deal between Beijing and Washington—but, again, a source close to Bannon assures me Guo remains in the U.S.; Bannon didn’t elaborate. “As far I know, he hasn’t been extradited,” one national security official writes. Guo’s pinned tweet on his Twitter profile is a picture with the former White House chief strategist. This official notes, however, that Guo has stopped tweeting as of late last month. “Guo hasn’t tweeted since 23 Nov.”

The Wall Street Journal piece namechecks Thornton for one particular incident: a heated argument between her and Ezra Cohen-Watnick, a former member of the National Security Council.

“Cohen-Watnick, then senior director for intelligence programs at the National Security Council, confronted Susan Thornton, an East Asia expert who serves as Acting Assistant Secretary of State, charging her agency was improperly hindering law-enforcement efforts to address China’s repeated violations of U.S. sovereignty and law, according to people familiar with the discussion,” the Wall Street Journal reported of a June administration meeting.