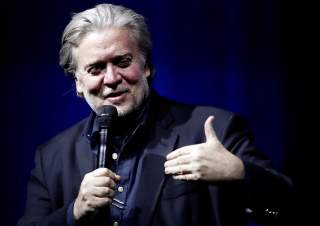 The coup de grace of Steve Bannon’s second sojourn to Europe of the year transpired earlier Friday: a handshake and chat with Viktor Orban, the longtime Hungarian premier and world populist icon.

Bannon’s trip to friendly territory—the illiberal democracies of the Visegrad Group (Hungary and the Czech Republic), capped off by a stop in the populist powderkeg of Italy this weekend—has been nothing short of a success, in achieving three goals.

First, he is carefully praising the president of the United States, with whom he is slowly but surely rehabilitating himself.

In an interview with the BBC, he explicitly rejected the idea that he was “the architect of the 2016 election” and paid obeisance to Trump.

“That’s totally not fair,” said Bannon. “Trump is unique in American political history. .. I came in with 88 days to go. … I came in as CEO and helped kind-of recalibrate. They had lost their message.” Bannon noted: “Donald Trump closed that deal.”

Second, he is seeking to cement his standing as Trumpworld’s and Washington’s emissary to the growing movement of European populists.

“Here’s what so stunning. These elections are not even close now,” Bannon told Hungary’s News4. “The rejection of the party of Davos, in Italy, is two-thirds of the vote.”

In video provided by euronews, ahead of his meeting with Orban, Bannon is seen being warmly greeted by champagne-swilling populist grandees on a boat. At his side was none other than Raheem Kassam, who got his start as Nigel Farage’s right-hand man, and who, it was announced this week, recently resigned from Breitbart London. Kassam this week floated a future run against Sadiq Khan, the London mayor who belongs to the Labour Party.

And Bannon’s third goal for this trip, those in his orbit say, is to provide daylight once and for all between what he sees as the virtuous populist-nationalist movement writ large, and some of the more unsavory elements that have attempted to latch on to it.

“These guys don’t exist unless you make them a big deal,” Bannon told the BBC. “They’re totally irrelevant. … First off, they’re all cranks. Donald Trump has said that. I have said that. … You know, [Richard] Spencer, [David] Duke, they’re all cranks. The only reason they exist is because MSNBC and BBC is down there with the camera, giving them a platform. If you cut them off, nobody would ever hear from them.”

Some say it is indeed. “What happens when you give Steve Bannon a platform? Fascinating television, apparently,” the perspicuous Freddy Gray writes in the London Spectator. “If the BBC really is, as Steve Bannon says, a communications department of the global elite, they messed up badly last night. … It was also the longest advertisement for economic nationalism yet delivered to British viewers.”

[Bannon’s] deeper point about Trump — the one his acolytes often make — is that economic nationalism is bigger than the Trump administration, and he’s not wrong. The 2016 Republican victory was about the country not the candidate.

The point could come at a crucial time.

On the home front, while Bannon’s days of criticizing the president in public are likely over, some of the other intellectual supporters of Trump’s victory are growing morose about the state of the White House.

Scott McConnell, founding editor of The American Conservative (along with Pat Buchanan, whom Bannon has told me he admires, and Taki Theodoracopulos, whom Bannon has dined with this year in Europe and New York), worries that the Trump administration is going off the rails.

“In redirecting his foreign policy in a hawkish, neoconservative direction, Trump is carrying out one of the greatest bait and switches in American political history,” McConnell told me. “After winning the presidency as a critic of the Iraq war and mindless interventionism, … his cabinet and national security staff [is] … intent on pursuing the neocon, Israeli, and now Saudi dream of an American war with Iran.”

Populism may be gathering steam in Europe, but its future in America remains an open question.