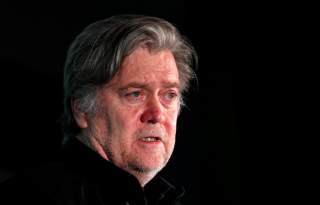 Stephen K. Bannon joined other Republican grandees such as Sen. Tom Cotton at a packed event in Washington on Monday.

The optics were almost too perfect. Minutes before Bannon, the former White House chief strategist, was due to speak in the highlight time slot at the Hudson Institute’s security summit on Monday, all went dark. Bannon, of course, knows who he is—someone who has stated that “darkness is good. . . . Dick Cheney. Darth Vader. Satan. That’s power.” The outage, never explained by the conference’s organizers, left the preceding panel, including Rep. Brian Fitzgerald, awkwardly carrying on for several minutes with no light. The scene was downright goofy: Sebastian Gorka, Bannon’s former deputy in the White House and notorious cable-news personality, was spotted in the pitch crowd giving out autographs. Eventually a spotlight was installed. “Depending on your political perspective, you can interpret the absence of light in two ways,” joked moderator Husain Haqqani, a former Pakistani ambassador.

The purpose of the day’s event—held in a packed ballroom in Penn Quarter—was “Countering Violent Extremism: Qatar, Iran, and the Muslim Brotherhood.” Bannon didn’t hold back. “I think the single most important thing that’s happening in the world is the situation in Qatar,” Bannon told attendees, referencing the current standoff between Qatar and its ostensible allies, fellow Gulf Cooperation Council members Saudi Arabia, the UAE and others. He opened by quoting President Trump’s inaugural address, and bragged that president’s trip to Saudi Arabia in May gave the Saudis the gumption to lead a blockade against Doha. “I don’t think it was just by happenstance that two weeks after the summit that we saw the blockade by the United Arab Emirates and Bahrain and Egypt and the king of Saudi Arabia on Qatar,” said Bannon.

It was striking, that Bannon, a media editor and former political aide who worked in the White House less than a year, was the closing highlight speaker, in a conference that featured a former secretary of defense, Leon Panetta; a former CIA director and the most well-known general of his generation, David Petraeus; and rising stars in the GOP, such as Sen. Tom Cotton, among others. By a country mile, the room was most packed for Bannon. During Petraeus’s remarks, Hudson organizers had to shush and quiet conversations in the back of the ballroom, as attendees grabbed refreshments and snacks. Not so for the prince of darkness, whose reception—on the day “Morning Joe” host Joe Scarborough accused Bannon of being the head of a “scam”—belied his continued clout and mystique.

Bannon, who has sometimes been cited as “Trump’s dove,” has emerged as one of the harshest critics of Iran in Trumpworld, collaborating extensively with former UN ambassador John Bolton, as I’ve reported. Bolton thinks the current move on the JCPOA is essentially for show: the deal is unsalvageable. His plan, backed by extreme hardliners like Frank Gaffney, calls for discussing military options with Israel against Iran and backing Kurdish national aspirations, which is a nonstarter for Iran, Turkey and the Shia-dominated government in Iraq; Bolton was spotted entering the White House on Monday.

Bannon accused Iran of conducting a “pincer move through the Arab world,” language in line with those who are most critical of Iran. Bannon, who frequently speaks in “civilizational” terms, has joined those who fear a Tehran-controlled “Shia crescent” spanning from North Africa into Central Asia, and even a reconstituted Persian empire—“expansionist Persia,” as Bannon has told me. Financing of groups like the Muslim Brotherhood is where Qatar comes into play, Bannon says.

“The Qataris are the ATM of the Muslim Brotherhood,” charged Jonathan Schanzer, executive vice president at the Foundation for the Defense of Democracies, a think tank that has been consulting closely with the administration, in a phone call with me. “They are, without question, the top sponsor of the Muslim Brotherhood, both politically and financially.” Schanzer says, “There is a group of people who either have served in the White House, or continue to, who see the Muslim Brotherhood as a top issue. . . . I would say that Bannon’s views reflect that perspective.”

This puts Bannon and others in some contrast with others—namely Secretary of State Rex Tillerson, widely thought to be a marked man, but one who Bannon did go out of his way to officially back on Monday. “The White House and Tillerson are on different pages” vis-à-vis Qatar, says Schanzer. “Tillerson continues to push a relatively swift resolution,” while others in the cabinet and in Trump’s orbit, like Bannon, are more hawkish on the country. In theory, because Qatar is so extraordinarily wealthy, they could afford to wait out this current impasse as long as a decade, said Schanzer.

“It’s again a pleasure to be in Doha, a place I’ve visited and known for many, many years,” Tillerson, the former Exxon chief, said in Qatar on Tuesday. “Let me make clear that the U.S. does not have any intention to impose a solution on anyone in the current dispute.” That language contrasts sharply with Bannon’s. “The original twelve demands that were put out [by the Saudis, the UAE, and their allies] . . . I think these demands are, quite frankly, pretty straightforward,” Bannon said. “I took a very hard line on that. I thought the UAE and the Egyptians and the Kingdom of Saudi Arabia had a well thought-through plan,” though he noted he didn’t necessarily agree with every single demand.

And Bannon forcefully denied a McClatchy report out Monday that he has an implicit financial stake in going hard against Qatar. Bannon, though, ever a political combatant, said the report was a fair play by his enemies; at one point he reiterated that he still views establishment outlets like the New York Times as the “opposition party.” Of the report, liberal writer Charlie Pierce asserted Tuesday in Esquire that Bannon is “in it for the money, and the UAE, which presents all the same problems that Bannon attributes to Qatar, was willing to meet his price.”

Yousef Al Otaiba, the Emirati ambassador and a top Washington powerbroker, was seated in the front row during Bannon’s segment. Other officials from the Saudi embassy were scattered among the crowd. “Neocon Hudson Institute got Petraeus and Bannon to back UAE-Saudi attack on Qatar yesterday. But how much did UAE have to pay them for that?” complained investigative historian Gareth Porter Tuesday.

But on other the issues, Bannon sounded more like a Buchananite paleoconservative. It formed a stark contrast with Petraeus who, along with veteran diplomat Dennis Ross, argued that direct U.S. involvement in the Middle East is a “generational struggle.”

“There’s nobody in the United States that wants to be engaged in combat operations, Special Forces operations, drone operations,” ad infinitum, Bannon said. “That’s just not where the American people are,” Bannon continued. “It’s not the way our country was founded or formed. . . . What we don’t want is these countries to be protectorates. It’s not our fight.”

Daniel McCarthy, editor at large at the American Conservative, attempts to parse what’s going on. “Bannon is an example of parallel evolution: he resembles the paleoconservatives or Buchananites in some respects . . . but he’s not the same species,” McCarthy tells me. “On the campaign trail, Trump appealed both to voters who were more hawkish than the establishment and to those who were more dovish. . . . The trouble is that while Buchananism is a well-developed as a worldview, it didn’t win elections. Bannonism can win elections, but it’s not as clear how its various pieces fit together, especially in foreign policy.”

Should Bannon continue to be a larger-than-life presence in the DC game, we should get an answer on how his foreign policy works in practice soon enough.