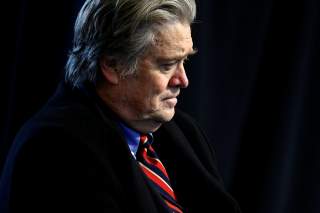 Steve Bannon is going on the warpath. In addition to returning to the helm at Breitbart, the populist firebrand is strategically placing stories and granting comment to outlets not automatically sympathetic to President Trump, or in many cases, ones that are outright hostile, including the Economist. Now it turns out that Bannon also asked former Ambassador John Bolton to publish a memo on Iran in National Review. On Tuesday, Bolton, a long-standing Iran hawk, laid out the pathway for Trump to leave the nuclear deal and explore options for regime change.

Pressed for his general views on Iran, Bannon directed me to Bolton’s piece. It is Bolton’s “alternative for POTUS that I requested,” Bannon told me. Bolton declined to comment.

This maneuver may point to Bannon’s real views on Iran, which have been something of a mystery. Scott McConnell, founding editor of the American Conservative, noted over the weekend that he’s never seen Bannon comment on what “he actually thinks about Iran.”

Bolton tackles the issue with gusto: “With Israel and selected others, we will discuss military options,” Bolton writes. Iran, hostile to the U.S. government but widely conceded as one of the more socially moderate Middle Eastern countries, is nothing less than “a threat to our civilization.” And in the event of President Trump pulling out of the Iran deal, Bolton argues, he should start taking forceful action: “Announce U.S. support for the democratic Iranian opposition; Expedite delivery of bunker-buster bombs; Announce U.S. support for Kurdish national aspirations, including Kurds in Iran, Iraq, and Syria.”

“I guess Bannon is no Buchananite, despite some similarities,” McConnell told me.

Such developments are likely to add to growing discomfort among the noninterventionist Right. Rep. John Duncan of Tennessee wrote on Wednesday that Trump is losing him on foreign policy. “I will continue to support the President in every way that I can, but I hope he will very quickly get back to the America First agenda he so forcefully advocated in his campaign.”

Bannon’s outing will likely be unwelcome news to Duncan and other conservatives who believe that Trump is moving away from the America First doctrines that helped to propel his campaign. (The Tennessee Congressman did oppose the Iran deal, but on largely technical grounds. “I believe that if this agreement had been made by a Republican President, almost all Republicans would have supported it,” he wrote in 2015.)

Bannon’s Iran antagonism makes his foreign-policy perspective far more complex than it has been characterized. Bannon in recent weeks has been described as Trump’s dove, and has opposed the president’s approach to Afghanistan. If the United States had to stay in some capacity, Bannon favored sending private contractors, mercenaries. But the Erik Prince–sponsored plan has been shelved, at least for now. It was considered at the highest levels, but was rejected, very possibly contributing to Bannon’s exodus from the administration. The idea was not spiked before Prince made a round of media appearances in Washington this summer, most notably leading Tucker Carlson’s program on Fox News, an hour before Trump announced his Afghanistan policy.

Bannon is also a noted skeptic, like candidate Trump, of intervention against Syria’s Bashar al-Assad. Bolton is not, though he has called taking out Assad only a “sideshow”—but still necessary—lining up with language espoused in recent months by prominent neoconservatives. “Regime change in Iran is the prize,” Bill Kristol of the Weekly Standard tweeted after the president’s strike against Assad in April.

Which makes Bannon’s apparent hawkishness on Iran somewhat confusing. Trump used to publicly mock people like Kristol. “It crystallizes the irony,” Robert Wright noted this weekend. “If Bannon was not championing deepening military involvement in Syria, and was even amenable to doing a deal with Assad, on the one hand, but it is virulently anti-Iranian, on the other hand, that’s an odd combination,” given that a central rationale for opposition to Assad for Western hawks, Saudi Arabia and the Israeli government is to curb Iran’s influence, and its collaboration with Hezbollah.

One possibility is that Bannon views Iran as part of the larger war against “radical Islam” and does not see the largely secular Assad that way. “We are at war, man,” the conservative hardliner Frank Gaffney told me last week. Gaffney traces the U.S. war with “radical Islam” back to 1979—that it was kicked off by the Iranian Revolution that installed the current government in Tehran. The only picture I saw in Gaffney’s office was a photo of him with Bolton, along with other George W. Bush–administration power players.

Another possibility is that either Trump or Bannon, or both, have determined that this presidency needs war fever to save it. “From a purely political standpoint, it probably makes sense for the administration to go in this direction,” Julius Krein, the editor of American Affairs and a Trump apostate, told me. “It returns debate to more typical partisan grounds and would probably be welcomed by most of the traditional Republican coalition.” But Krein is skeptical that Trump will actually go through with a Bolton-type agenda. According to Krein, Trumpworld “has a history of floating things like this to see what the reaction is. . . . But I find it difficult to believe that Trump himself is all that personally engaged on Iran as suggested by” Bolton’s memo.

So is Bannon really pushing for conflict with Iran? Or now that Bannon has his “weapons back,” as he put it the other day, is he simply trying to make life even more difficult for his nemesis, National Security Advisor H. R. McMaster? From his sniper’s nest in Capitol Hill, only one man knows for sure.