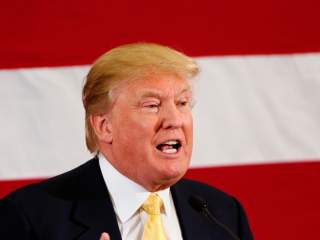 Timothy Egan needs to get a grip. The New York Times contributing writer is going bonkers over the presidential candidacy of billionaire Donald Trump. In his latest political commentary, the Seattle writer essentially equates Trump supporters with neo-Nazis and the Ku Klux Klan. It is true, as Egan appropriately notes, that some of these far-out types have endorsed Trump. But does that mean Trump’s base of support is made up primarily of such people?

Egan seems to think so. In a December 12 column, he takes pains to acknowledge that “all the little Hitlers probably don’t amount to a hill of beans.” Then he asks: “But what about the 35 percent of Republican voters…who say they’re all in with the man sieg heiled by aspiring brownshirts and men in white sheets?” He talks of the Trump base “and their awful bedfellows in the neo-Nazi bunkers.” He says Trump has given his supporters “permission to hate” with an “un-American sentiment” that has been a “mainstay of conservative media for at least a decade.”

This constitutes the polemics of a lazy polemicist. It’s easy to attack a politician with an apparent following with clever and brutal language designed to thrust the politician and his followers into a netherworld of evil and disrepute, unworthy of any serious analytical regard. It’s easy to hoist the hoary Nazi analogy as a definitive definitional stamp, not admitting of rebuttal or any kind of interpretative parsing.

What isn’t so easy is attempting to determine just why such a political phenomenon as the Trump poll numbers might emerge in the American polity at such a time as this. When a crude, pugilistic politician emerges in the country, it shouldn’t be dismissed as simply an evil sump of outlandish political sentiment that threatens the very foundation of our democracy. Far better—and more productive—would be to seek to understand the origin of the Trump emergence, such as it is. After all, railing against it won’t neutralize it; it will have to be either absorbed into mainstream political thinking in some way or rebutted effectively through the normal channels of American discourse.

An attempt to understand the phenomenon might begin with a sentence in Egan’s own column that resides in a paragraph in which the writer seeks to describe the Trump constituency. Conceding that these people don’t see “the shadow of the Reich when they look in the mirror,” he then portrays them as white, lower-middle-class, with little education beyond high school. Following this somewhat elitist description, he adds, “They don’t recognize their country.”

They don’t recognize their country. This carries more freight than Egan seems to perceive. In the context of his overall column, this appears to be a pejorative, a kind of explanation as to why these benighted people—without college degrees, after all—are flirting with something approaching Nazism. But, if we strip away the smugness, it actually might get to the heart of the Trump phenomenon. Egan probably could have built a meaningful column around that single insight, had he been willing to dispense with the fulmination and pursue a true analytical quest.

Begin with this question: When in American history have so many people felt that they no longer recognized the country of their childhood, the country of their parents and grandparents? True, technology has altered the face of America just about every decade. New entrants arrived from different areas of the world in a kind of kaleidoscopic process. New styles and habits of thought emerged over time. New social customs and mores were embraced, while others were discarded. Certainly, attitudes about race and ethnicity have evolved significantly over time.

But never have these things converged upon the country with such force and so quickly, redefining what it is to be an American.

The late Harvard political scientist, Samuel Huntington, once identified four components of American identity that have held sway within the country’s civic consciousness over the course of the U.S. experience. Two have fallen by the wayside, but at the beginning of nationhood the country was defined by ethnicity, race, culture and the American creed (meaning adherence to our governmental institutions).

On the matter of race, Huntington writes, “For all practical purposes America was a white society until the mid-twentieth century.” This was reflected in the country’s attitudes and policies regarding native Indians, in its racist views of blacks brought here against their will as slaves, in immigration policies, in Supreme Court rulings. Race played a significant role in the U.S. identity until the mid-twentieth century, when it was redefined as a moral issue and lost its standing as an element of identity.

The ethnicity issue came to the fore with large numbers of immigrants from eastern and southern Europe beginning in the 1880s. Seeking to preserve this element of identity, Americans curtailed immigration from these regions in the 1920s. But this had the paradoxical impact of eroding entirely the ethnicity factor, as the country relaxed about prospective influxes and assimilated those already here. Huntington quotes a writer named Philip Gleason as noting that beginning with World War II, ethnicity evaporated as an identity factor. “The typical war movie,” said Gleason, “featured an Italian, a Jew, an Irishman, a Pole, and assorted ‘old American’ types from the Far West, the hills of Tennessee, and so on, and this motif was not confined to Hollywood.”

It’s important to note that, beginning in the mid-1960s, the country largely absorbed and accepted the loss of these identity factors. It still struggles with race, but not as an element of national identity.

What about the cultural factor? The country’s mainstream cultural identity was essentially what Huntington calls Anglo-Protestant. The late Arthur M. Schlesinger Jr. once wrote that “the language of the new nation, its laws, its institutions, its political ideas, its literature, its customs, it precepts, its prayers, primarily derived from Britain.” Huntington adds, “With adaptations and modifications, this original culture persisted for three hundred years.”

But following the countercultural revolution of the 1960s and 1970s, this cultural identity came under a powerful assault from thinkers and writers who took offense at the expectation on the part of the country’s Anglo-Saxon elite that newcomers should absorb the prevailing culture. No one expressed that traditional expectation more starkly than Theodore Roosevelt. “An immense number [of immigrants] have become completely Americanized,” wrote the country’s twenty-sixth president, “and these stand on exactly the same plane as the descendants of any Puritan, Cavalier, or Knickerbocker among us….But where immigrants, or the sons of immigrants, do not heartily and in good faith throw in their lot with us, but cling to the speech, the customs, the ways of life, and the habits of thought of the Old World which they have left, they hereby harm both themselves and us.”

Whereas for decades TR’s concept of “Americanization” was considered normal and healthy, eventually it came under attack, which was also an attack on the traditional cultural identity of America. Writer Michael Novak once described this cultural expectation as “a process of vast psychic repression.” This attack has been going on for nearly half a century, boosted by immigration patterns that saw large numbers of newcomers with little regard for the country’s traditional cultural sensibility or other previously defining elements of the Western heritage. Add to that the profound transformation in majority thinking on major cultural issues such as gay marriage. Throw in the politics of grievance now generating increasingly intense civic pressures within American society. Note also the accompanying assault on the symbols of the country’s historical heritage.

These are big changes washing over America, and it isn’t surprising that some people would feel uncomfortable with how they’re transforming the country. No doubt this contributes to the poll numbers showing that large segments of the population believe the country is on the wrong track. There are people who don’t recognize their country, as Egan notes, and they aren’t comfortable with it. In a democratic country, such people look for avenues of expression for their discontent. Their avenue isn’t likely to be the establishment, which after all has fostered these changes rendering their country unrecognizable. They’re more likely to express their sentiments through a candidate such as Donald Trump.

Are they Nazis? They’re Americans expressing their concerns and fears through the American democratic process. The genius of that democratic process is that it absorbs such sentiments and melds them with many other sentiments, convictions and impulses into a swirl of political expression that moves the country forward, through change and discord and civic frictions, to ultimate consensus.

Donald Trump, for all his uncouth ways and provocations, is part of that dialectic—probably a fleeting one. The American political collective will process his advocacy as it grapples with the profound change of our time, with avenues of political expression open to those who celebrate that change and those who oppose it. In the meantime, we can take comfort in knowing that this is not Germany circa 1933. Timothy Egan can relax. To that end, he might want to try some breathing exercises.