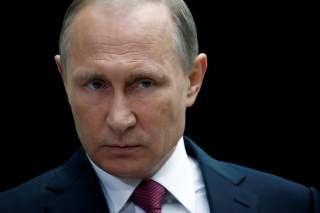 War between Russia and the West seems nearly inevitable. No self-respecting nation facing inexorable encirclement by an alliance of hostile neighbors can allow such pressures and forces to continue indefinitely. Eventually it must protect its interests through military action. Indeed, Russia already has resorted to military action: in Georgia in 2008, after that Russian neighbor initiated a war with Moscow designed to severely curtail Russia’s influence in its own neighborhood, and in eastern Ukraine, after the West encouraged and fostered a 2014 revolution that upended an elected Ukrainian leader whose foreign and economic policies tilted toward Russia.

And consider Russia’s territorial fate since the West’s Cold War victory over Soviet Bolshevism. Before that momentous development, which was entirely necessary and laudable, the Soviet Union had no Western enemies within a thousand miles of Leningrad. Now that fabled Russian city, renamed St. Petersburg once again after the obliteration of the ideological menace of Soviet communism, resides within a hundred miles of NATO military forces. Moscow was protected behind 1,200 miles of controlled territory during the Cold War; now that distance is two hundred miles.

This represents a monumental shift in Russia’s geopolitical situation, and much of it was, and remains, a cause of celebration. The Soviet yoke over the peoples of Eastern Europe had to be removed, and the West’s long Cold War struggle, particularly the early initiatives under Harry Truman and the final push under Ronald Reagan, represents a heroic tale of calibrated resistance and tireless resolve.

But Western intrusion into traditional Russian spheres of influence, areas under the sway of Moscow for three centuries or more, represents a highly provocative and destabilizing policy. Ukraine was one such Russian sphere of influence. Georgia was another. So was Belarus. So was Serbia. All have been subject to Western designs to one degree or another, including serious U.S. initiatives to dismember Serbia and get Georgia and Ukraine into NATO.

Further, the West has offered no expressions indicating what might be the limitations of its encirclement plans. Prominent Americans talk freely of “regime change” in the country, and the U.S. government has sponsored NGO activities designed to foment antigovernment activities there of the kind that stirred a pro-Russian leader of Ukraine—the corrupt but duly elected Viktor Yanukovych—to flee his own country upon threat of death. America’s promiscuous post–Cold War activities in support of regime change—in Iraq, Libya, Syria, Yemen—lend weight to suspicions that it harbors similar views toward Russian president Vladimir Putin.

Indeed, the demonization of Putin by America’s intelligentsia has been nearly unprecedented in peacetime. Hillary Clinton invokes Hitler as a comparative figure and, while others have stopped short of that kind of rhetorical excess, the attitude remains the same. He is evil and presides over a menacing, conquest-hungry nation; he and his country must be stopped, curtailed, declawed. There is no recognition in any of this that Russians may view themselves, with at least some validity, as a beleaguered nation vis-à-vis America and its allies.

Donald Trump was elected in part to change all that. As the University of Southern California’s Robert David English notes in his excellent recent Foreign Affairs essay, Trump repeatedly asserted in his first press conference that it would be “positive,” “good,” or “great” if “we could get along with Russia.” Unlike most of the country’s elites, he vowed to seek Moscow’s cooperation on global issues, accepted some U.S. share of blame for the two countries’ sour relations and acknowledged “the right of all nations to put their own interests first.”

This suggested a dramatic turn in U.S.-Russian relations—an end to the encirclement push, curtailment of the hostile rhetoric, a pullback on economic sanctions, and serious efforts to work with Russia on such nettlesome matters as Syria and Ukraine.

This budding initiative now lies in tiny shards upon the floor of global politics. We don’t yet know, and perhaps never will, the full story of what happened with regard to Russia’s effort to tilt America’s 2016 presidential election. And we can’t yet form a full picture of the actions undertaken on the part of the Trump team or the president himself to collude with official Russia in U.S. internal politics. It might be very serious; it might not.

But it almost doesn’t matter. Trump’s Russia initiative appears dead. The anti-Russian elites have won the day, whatever the merits of the case or wherever the facts now lead. The president looks hapless on the issue. New sanctions are coming, whether he wants them or not. NATO expansion and the West’s Ukraine meddling will continue. Encirclement is firmly in place.

It’s difficult to envision where this could lead, short of actual hostilities. Russia’s fundamental national interests, the ones Trump was prepared to accept, will almost certainly render such hostilities inevitable.

Robert W. Merry is editor of the American Conservative and an author of books on American history and foreign policy. His next book, President McKinley: Architect of the American Century, is due out from Simon & Schuster in November.