The Story of Hanukkah Has Become Politicized 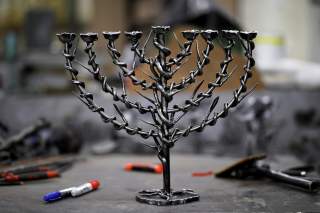 Many Jews are celebrating Hanukkah this week, but in rather different ways. Some are lighting candles all eight nights and reciting prayers—heads covered with kippahs. For others, the holiday is a way to compensate their children for not having a Christmas and they are showering the kids with gifts all week long. Some stuff themselves with traditional foods (in particular deep fried potatoes called latkes and doughnut-like sweets). Many are troubled by whatever tradition they follow—and above all by those which others adhere to, reflecting the growing polarization within the Jewish community.

A telling example is the way Michael David Lukas, a liberal, semi-secular Jew, reflects on the holiday in the only op-ed the New York Times has run on the subject so far this year. Lukas’ title provides a sort of trigger warning: “The Hypocrisy of Hanukkah.” Lukas takes issue with the holiday’s history, which he sees as “an eight-night long celebration of religious fundamentalism and violence.” For him, the story of Hanukkah is a story of zealot Maccabees securing a victory over moderate Hellenized Jews and imposing their version of Judaism upon them. To Lukas, Hanukkah is a celebration of the triumph of fundamentalism over cosmopolitanism.

For many in Israel, Hanukkah is a story of a military victory. Israeli Jews celebrate the Maccabees overthrowing the Greek-god worshiping Seleucids and rededicating the Holy Temple in Jerusalem in the 2nd century BCE. They do not play up that the Greek forces had Jewish collaborators, Mr. Lukas Hellenized Jews. However, American Jews—many of whom are liberal and opposed to nationalism—are uncomfortable with celebrating military might. The fact that a growing number of them are highly critical of Israel further leads them to shy away from the Israeli interpretation of the holiday.

Orthodox Jews see in Hanukkah, first and foremost, a celebration of the Lord’s prowess, not that of the Israeli Defense Forces. They celebrate a God-given miracle when—during the Maccabean Revolt—the Jews only had access to one day’s supply of ritually pure oil to light the Holy Temple’s Menorah but it managed to burn for eight. However, for the growing number of secular Jews, the tendency of others to become more Orthodox is troubling. They associate religion with illiberal traditions such as treating women as second-class citizens and condemning homosexual relations. Religious Jews look at the secular celebrations as empty hedonism—an excuse to eat, drink and be merry.

There have always been divisions within the Jewish community (as there are in many others). However, it seems that in the age of polarization these divisions grow deeper. That should please none of the community’s various segments. There is a way to combine elements from all these divergent traditions. Sometimes the use of force to secure liberty is unavoidable, but it should not be employed to enforce religious tenets. One need not take the story of the lasting light literarily to recognize that life often unfolds in ways that are unpredictable and mysterious (such as when cancer patients live much longer than their doctors assume). Above all, there is much value in maintaining a measure of commonality as Jews face rising anti-Semitism, rapid loss of memberships due to out-marriage, extreme assimilation and threats to the very existence of Israel.

Amitai Etzioni is a University Professor at The George Washington University. He is the author of My Brother’s Keeper: A Memoir and A Message and the editor of We Are What We Celebrate: Understanding Holidays and Rituals, a collection of essays on the important role holidays play in cementing family bonds and building community.