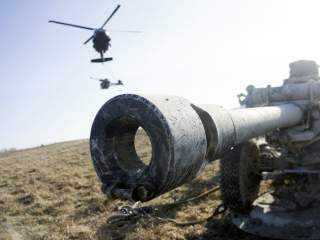 MARK TWAIN observed, “history doesn’t repeat itself, but it does rhyme.” The study of military history teaches us valuable lessons that are applicable to today’s most intractable strategic problems; yet, these lessons are underappreciated in current American strategy formulation. Throughout the history of American armed conflict, the United States has discerned, at great cost, four critical lessons applicable to containing and combating the Islamic State.

First, as war theorist Carl von Clausewitz noted, war is a continuation of politics by other means; but resorting to war rarely yields the ideal political solution envisioned at the start of hostilities. Second, the use of proxy forces to pursue American geopolitical goals is rarely an investment worth making because proxies tend to have goals misaligned with those of their American sponsors. True control is an illusion. The corollary to this axiom is that supporting inept and corrupt leaders with American power only invites further dependency, does not solve political problems and usually prolongs an inevitable defeat. Third, conflating the security of a foreign power with that of America leads to disproportionate resource allocation and an apparent inability at the political level to pursue policies of peace and successful war termination. Fourth, alliance formation through lofty rhetorical positions imperils rational analysis of geopolitical and military realities. Publicly staking out inviable political end states invites a strategic mismatch between military capabilities and political wishes, endangering the current enterprise as well as future national credibility. America has paid for these lessons in blood; our leaders ought to heed them.

THE OBAMA administration’s effort to again increase the number of American military advisors in Iraq, coupled with the reconstruction of a new base at al-Taqaddum in Anbar Province, has given rise to accusations among both Democrats and Republicans about either mission creep (from doves and noninterventionists) or weak incrementalism (from hawks and liberal interventionists). Former defense secretary Robert Gates observed in May 2015 that there simply was no American strategy in the Middle East. Congressional hawks have used Gates’s observation to criticize the Obama administration’s cautious efforts in any ground campaign against the Islamic State, and some have called for thousands of American boots back on the ground in Iraq. However, during a 2011 visit to the U.S. Military Academy at West Point, Gates also told the cadets that any adviser who counseled deploying large land forces to the Middle East should “have his head examined,” suggesting that a larger military footprint should not be confused with a robust strategy.

Using rhetoric reminiscent of George W. Bush’s “War on Terror,” in 2014 President Obama pledged to “ultimately destroy” the Islamic State, but over a year later the Obama administration itself admitted that its strategy is not yet “complete.” Indeed, even complete strategies often do not survive first contact with the enemy. As military personnel often quip, “the enemy gets a vote,” and the Islamic State seems to be visiting the ballot box early and often. A candid comment about strategy formulation makes for an interesting sound bite (or cudgel). But discretion may be the better part of valor when facing the slippery slope of another open-ended commitment in Iraq. Many observers took President Bush to task for suggesting that an ideology could be defeated by applying military force, but their critiques could apply just as well to Obama’s turn at the helm.

Pledging victory implies an end state that is ultimately acceptable to one’s adversary—whether it’s forced upon it (like the unconditional surrender of Japan in 1945) or a negotiated political solution (as in Korea eight years later). The Islamic State seems to show little taste for negotiation, and why should it? Most wars are prolonged in the hope that each side will come to the negotiating table with a better hand to play. The Pentagon service chiefs appear reticent to get further involved in Iraq absent a political solution. But the Obama administration has been bullied into increasing troop numbers by Congressional hawks who have conflated the security of Iraqis with that of Americans and the cohesiveness of the Iraqi state with core U.S. national-security interests. America has been here before.

Unlike at the height of its post–Cold War military power, America no longer has the ability to dictate events globally—to the overplayed extent that it ever did. This is particularly true in North Africa, the Middle East and South Asia. Those who argue that an American military campaign could defeat ISIS in a durable way place too much confidence in the ability of any American administration to control events abroad, especially in deeply rooted internecine conflicts. In fact, although what is happening in the Islamic State’s Iraqi strongholds is both primitive and shocking, the state of affairs in Baghdad is what should be cause for even greater concern in Washington. Iraq, under its Shia-dominated government, has marginalized Sunnis and alienated Kurds, perhaps to the point of no return. Indeed, the billions of dollars invested in training Iraqi forces are for naught if the controlling political entity is a house divided against itself.

Iraq did not slide into its current state of affairs without outside help. The United States cannot escape some culpability for what Iraq (and Syria) have become, but expensive U.S. efforts to encourage good governance and interreligious and intertribal dialogue and cooperation have fallen short. Calling for a strategy to defeat an ideology or repair Iraq is tantamount to demanding that a physician devise a strategy to treat a patient admitted to the emergency room with a shotgun blast to the head. Even with the best of intentions, unlimited resources and the best expertise available, there isn’t much that can be done to reach the status quo ante bellum.

SINCE THE end of World War II, the American military has struggled to translate tactical military success on the battlefield into durable political gains. Although America has no peer when it comes to accumulating post-9/11 tactical victories, the record is not enviable at the political level. Witness the bin Laden raid of May 2011 and the daring May 2015 Army Special Forces raid into Raqqa, Syria. These were spectacular tactical successes, and perhaps necessary from a moral perspective, but they achieved little at the strategic level. To be sure, the world is a better place without Osama bin Laden and ISIS financier Abu Sayyaf, and they richly deserved their fates. The problem is what comes next. The United States has been eliminating the leadership of Al Qaeda since the end of 2001 and has transferred those lessons to effectively remove the leadership of many Al Qaeda franchises in Yemen and North Africa as well. No doubt the United States will further apply its lethal craft to ISIS in the near term. However, military history reveals that accumulating tactical successes does not equal strategic victory. The German military learned these lessons the hard way in both twentieth-century world wars. The Germans, although well equipped and tactically sound, were unable to realize their broader political desires through violence.

Soviet leader Joseph Stalin is said to have suggested that quantity has a quality all its own. If this is true, we must recognize American tactical successes for what they have achieved, even absent a broader strategy. The American homeland is arguably safer because those that seek to do it harm are impeded by those tactical successes. American military and intelligence operations have made enemy communications more difficult and secure staging bases hard to come by. The U.S. military killed or captured the top leadership of Al Qaeda and its like, retarding their operational planning and derailing their efforts to undertake spectacular attacks. If American strategy is threat mitigation through sustained special-operations raids and intelligence-driven covert action, it is working. Still, it is an open question how long this is sustainable, especially on the back of a shrinking, all-volunteer military force. American military and political leaders have spoken of a “generational war,” yet they also shrink from serious discussion about national service or a draft.

Assume for a moment that the Obama administration were to pour troops into Iraq and loosen their rules of engagement, permitting direct American participation in the fighting. Could a couple of U.S. divisions retake ISIS strongholds? Absolutely. It would come at a bloody cost to young American soldiers, as when Fallujah fell to American forces in 2004 with 560 American casualties (and thousands more with psychological wounds), but the U.S. military could surely retake the large cities of Anbar province. Could they hold them? Not indefinitely. With the forces and resources available to the Pentagon, the United States could hold it for a time while building Iraqi capacity. This is a key pillar of the Army’s counterinsurgency doctrine, but recent experiences in Iraq and Afghanistan lay bare the failure of this approach, at least on a timeline not measured in decades. The only dramatic success in Anbar province was a political one: the Sunni tribes “awakened” to turn against Al Qaeda of Iraq and the monstrous tactics of AQI leader Abu Musab al-Zarqawi. Political settlement manifested on the battlefield—a much more promising proposition than the other way around.