The Strategic Logic Behind the China Trade War 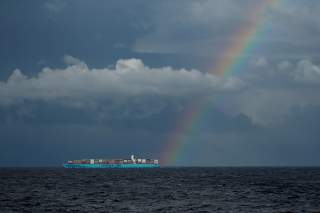 U.S. President Donald Trump’s trade war with China is controversial. It cuts against the grain of traditional American openness to foreign trade. It violates free trade, a core tenet of market capitalism and one of the few areas where the economics profession is nearly monolithic in its policy recommendation. And certainly, a protracted trade war with the world’s second-largest economy will have negative economic impacts. Trump’s tariffs may save jobs in one sector, but only at the cost of jobs in other sectors as trade diversion and inefficiencies set in.

But there is a strategic logic for trade curtailment with China—namely growing political and military competition with China, especially in East Asia. Curiously, Trump almost never makes this argument. Trump has referred to himself as a “Tariff Man,” and he routinely makes protectionist and mercantilist arguments for his trade policies. This often leads to bizarre outcomes, such as the White House’ assertion that imports from Canada or North Atlantic Treaty Organization countries constitute a national-security threat to the United States.

By emphasizing protectionism as a motivation to take on China, Trump creates unnecessary opposition. American elites generally accept the theory of comparative advantage as well-established economics going back two centuries. Trump’s Twitter bluster is not going to change that. Trump’s own Republican party has similarly long defended free trade to ensure continuing competition that keeps American capitalism vibrant and open new markets overseas for American exports. Trump has set himself against a rather deep intellectual consensus in Washington—barring the more traditional elements of the Democratic party—and so created more opposition than necessary.

Instead of defending Chinese trade antagonism as a dubious protectionist venture, the more obvious case to make is that trading with Beijing is increasingly trading with the enemy. Therefore, economics must be subservient to politics, and Americans should sacrifice some of the benefits of trade with China—cheap goods, cheap capital—for the larger benefit of slowing China’s rise to hegemony in Asia and direct, superpower peer competition with the United States.

The national-security community has, of course, long worried about China’s rise. After the Soviet Union collapsed, the only possible competitor to America on the horizon has long been China. Other continental-sized powers like the European Union, Brazil, or India are democratic, while Russia lost two layers of empire in the Soviet collapse and is much reduced in power.

The Chinese Communist Party survived the collapse of Eastern European communism through harsh measures, most obvious the suppression of student protestors on Tiananmen Square in 1989. This persistence, coupled with China’s continuing marketization and modernization, meant the possible emergence of a wealthy, authoritarian great power. That would be dangerous and analogies to Wilhelmine Germany and World War I are common.

In the 1990s though, this still seemed far off. The national-security community at the time could be dismissed as looking for a new enemy now that the Soviets were gone, or being overly hysterical about China at a time of unparalleled unipolarity. Pushing back on China hawks was the business community dreaming, as it has since the Open Door Policy, of China’s huge internal market. Moreover, this “chamber of commerce” bloc overcame the hawks and organized labor in the 1990s. The United States granted Permanent Most Favored Nation status to China under President Clinton, and Washington supported China’s entry into the WTO in 2000.

President Clinton captured the strategic logic of this well by calling it “modernization by stealth.” Pulling China into the global economy would liberalize it by opening it up politically and socially. A wealthier China would be less interested in competition and nationalism, and more interested in material and quality of life advancement. The tiger would be sated and better-behaved.

This was a reasonable gamble at the time. Modernization and wealth have tempered other states—most obviously in Europe, Latin America, and democratic East Asia—and it was not an unreasonable hope that China might go the same route.

But in 2019, it is fair to say that this hope has not worked out and the issue is not completely decided. The United States and China are not in a full-blown cold war, but they are drifting in that direction. The conflict in the South China Sea is gradually emerging as one of the major hotspots in the world. China is no better on issues like North Korea, Taiwan, or internal human rights than in the 1990s. It drags its feet on environmental issues despite being the world’s worst polluter. Beijing throws money around southeast Asia to undercut the Association of Southeast Asian Nations and promotes its territorial claims on the South China Sea. Furthermore, China flirts with Russian president Vladimir Putin’s dictatorship. China has instituted a disturbing Orwellian surveillance state at home using ubiquitous cameras and surveillance. Finally, Chinese President Xi Jinping has (seemingly) overthrown the post-Mao leadership rotation system and installed himself as a permanent ruler.

In short, modernization has not tempered the tiger; if anything, it has fed it. Instead of facing a poor authoritarian state in 1990, Washington now faces a wealthy one. And the U.S. business community is no longer pushing back that hard on this hawkish interpretation. Business has slowly soured on China over the decades in the face of politicized, xenophobic regulation, relentless intellectual property theft, patent and copyright violation, forced technology transfers, Chinese subsidization and protection for Chinese firms, corporate espionage, and so on.

The policy discussion on China is drifting rightward. The business coalition which checked the hawks and U.S. military twenty-five years ago is now ambivalent, while the hawkish or “China threat” coalition—Washington D.C. think-tank types and analysts, the American military, the Japanese, and the U.S. Congress—is growing.

There is now arguably a strategic argument for the trade war—slowing China’s growth, even if it slows U.S. growth, serves a larger national-security purpose, and should, therefore, be considered. I do not believe that we are locked into a cold war with China already. There is still room to maneuver, particularly if Xi steps down (however unlikely) as his predecessors did after ten years. Nevertheless, the case for weakening Chinese growth to blunt its rise to regional hegemony is now clearer than ever. Trump could unite a fairly wide coalition with this message.