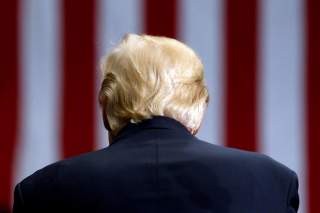 ALREADY THE Trump presidency has delivered big-time on one promise: it has shaken up the status quo. Like the Trump candidacy that had vilified the competence and performance of establishment practitioners in both major parties en route to a victory that few predicted, the Trump administration has made it abundantly clear that no personage, organization, bureaucratic office, process, policy or funded program is sacred.

In response, a chorus of negative commentary has been the soundtrack to the forty-fifth president’s early tenure. Foreign allies have expressed misgivings about potential changes in the U.S. security role. From the tenor of media coverage, protest rallies, political rhetoric, bureaucratic dissent memos and advocacy groups facing the loss of federal support, one could conclude that the president’s penchant for disruption is wholly at odds with the national interest.

But Trump never ran as an agent of continuity. From the outset, he framed his campaign as an indictment of the establishment, Right as well as Left, whose stewardship of the country’s affairs had for too long allegedly permitted American interests—principally economic interests, but also American power and reputation—to suffer. There can be no denying that the United States in this century finds itself on a trajectory of eroding solvency, declining geopolitical influence and fraying trust between many millions of American citizens and those in Washington on whom they depend to manage the nation’s affairs.

Unbeholden to political-party orthodoxy, and advised by some highly regarded national-security principals, President Trump has the opportunity to reverse America’s decline. This was, indeed, his signature campaign pledge. Boosting economic growth is only part of the solution. To succeed, Trump needs to retool the national-security apparatus, shaking up its turf-obsessed, risk-averse culture while sharpening its tradecraft. In a changed world, he must unify, empower and align the national effort toward endeavors of high consequence. In meeting the legislative requirement for a National Security Strategy, the president can best ensure future American greatness by offering a fresh road map to address long-term dangers and restore U.S. influence in the world.

THE AMERICAN era born of the allied victory in World War II has given way to a period in which the United States must now adapt in order to prosper and lead again. Not unlike a century ago, when the industrial age displaced the agricultural economy, economic foundations that sustained the average U.S. family’s standard of living for decades are crumbling, having fallen victim to the globalized labor market, automation, big data and web-enabled efficiencies. While the information age has yielded staggering economic success, segments of the American economy are largely excluded, and stagnating. As with Imperial Japan and interwar Germany in the early twentieth century, the prospect that major economic dislocation could feed widespread insecurity and spawn large-scale hostilities in this century cannot be dismissed. The test of American strategy will be its capacity to shape those political and economic dynamics that have the potential to undermine the international order, a system that has served the United States and most others so well since World War II.

Our challenge is to project security in a world marked—with important exceptions—by the diminution of state authority and the rise of individual empowerment. Although it is a mark of progress that modern governments wield less control over free citizens, states alone are entrusted with high privileges and responsibilities that would be undercut at our collective peril. Governmental stakeholders have been slow to grasp the cumulative effect of the gradual but growing assault by malign actors against the Westphalian system that underpins the security and standard of living of much of the world’s population, including 325 million Americans.

The in-basket of immediate problems includes North Korea’s nuclear and ballistic-missile programs, Russia’s threat to its western neighbors, China’s assertion of unfounded territorial claims in the East and South China Seas, and Islamist violence, including Iran’s regional destabilization activities. These and other current threats require attention and policy responses. Each threat, however, is but a manifestation—a symptom—of longer-term vectors of global regression that, if not countered in a comprehensive, sustained manner, could imperil America’s future security, freedom of action and well-being, potentially on an unmanageable scale. A strategy designed to shape, for as long as necessary, the most consequential adverse trends must inform and guide all of America’s policy exertions. Five such threats rise to the level of long-term strategic concern.

THE FIRST threatens the global embrace of rights and participatory democracy that, in recent decades, has delivered the most significant validation of America’s role as the world’s leading power. A troubling pattern has formed in several major countries that are considered strategic competitors of the United States, whereby a small circle holds an unyielding monopoly of political power, staging controlled elections to create a veneer of democratic process and amassing extreme wealth while favoring a loyal business elite. These powers represent a rival model of governance—an information-age autocracy, more orderly in outward appearance than America’s—that is undemocratic, economically inefficient and sustained by control over the security services and courts, the economy, and the media.

Such entrenched regimes pose threats both to their own citizens and to democratic governance elsewhere, as seen with the recent exposure of Russian influence operations aimed at misleading public opinion and fracturing political consensus in Western countries, including the United States. Inevitably, citizens in those societies will demand greater political participation and economic opportunity. Regimes at risk of losing control could resort to military force against neighbors to rally nationalist support; internal crises could arise with little or no warning.

History, at least since the French Revolution, has moved in a direction suggesting that political evolution toward rights-based governance with transparency and accountability is both universal and inexorable. The rise of a global youth generation, connected by the internet, makes it hard to imagine that the vox populi, from Tehran and Tahrir Square to the Maidan Nezalezhnosti, Hong Kong, Caracas, Kuala Lumpur and now even Moscow, will be indefinitely denied. And yet, ruthless actors—virtually all of them male—still cling to unbounded power and privilege, imposing harsh reprisals on any who would take it away from them.

The future international environment will be shaped by whether universal rights are defended and upheld, or suppressed with impunity. The United States should cooperate with any government where U.S. interests so dictate. Yet Washington must weigh deficits of political legitimacy in measuring relations with autocratic regimes, and be counted in opposition to the gross violation of international norms. We need to consider the implications for American interests if an alternative model of governance takes hold, marked by dictatorship, corruption, repression, censorship, arbitrary justice, destabilization of neighbors, and the serial violation of international law and norms. Our enduring security is connected to the legitimate interests of citizens everywhere, free and unfree. This is the defining ethos of U.S. foreign policy.

A second major danger, requiring—as it has for decades—steadfast U.S. policy leadership and conviction, is the potential spread of nuclear weapons and the escalation of hostilities involving nuclear-armed powers. At the heart of nuclear-nonproliferation policy is the imperative of defusing the perceived utility and appeal of nuclear weapons as geopolitical currency, conferring power and status. Even as the United States maintains its nuclear forces, its doctrinal reliance on nuclear weapons and its explicit pledge to extend nuclear protection to treaty allies such as Japan, the Nuclear Non-Proliferation Treaty must be upheld as the international standard obliging nuclear-capable states to work, in good faith, towards conditions for disarmament while cooperating in the peaceful use and safe custody of nuclear technology. Where opportunities arise to negotiate restraints on nuclear-weapons-related programs, the United States must be willing and prepared to test the possibilities and pursue them diplomatically.

Nuclear diplomacy with proliferating states does not always lead to improved relations. The Obama administration and its P5+1 negotiating partners traded major financial, legal, political and security-related concessions for Iran’s commitment to abide by restraints on its nuclear program. While monitoring and enforcing the Joint Comprehensive Plan of Action, the United States and others need to make clear that the accord does not exempt Tehran from accountability for its other objectionable actions. As North Korea’s provocative behavior forces the United States and others to contemplate options to prevent it from achieving a deliverable nuclear-weapons capability, the United States and its Pacific allies should also consider acceptable terms and arrangements by which Pyongyang might be induced to cease its threatening nuclear- and ballistic-missile-related activities. In South Asia, irrespective of the state of U.S. relations with Pakistan or India, maintenance of strategic stability remains a policy imperative, just as anywhere nuclear escalation remains a risk.

A third danger, plaguing predominantly Muslim and non-Muslim societies alike, is the contagion of terrorist and extremist violence perpetrated by actors claiming Islamic duty as their motivation. The succession of terrorist attacks at crowded sites in Europe and North America has spurred a powerful transatlantic consensus that this threat is intolerable and must be stopped. Doing so will require not only actionable intelligence on imminent threats, but greater insight into the roots and appeal of secretive calls to civilizational treason, as the basis for concerted action to contain and extinguish it.