An Afghanistan Strategy for Trump 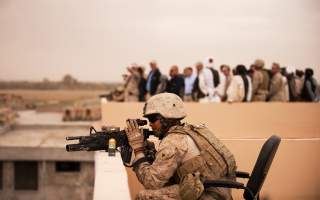 Good strategies are essential for the priority national-security challenges America faces, whether it is Syria, ISIS, Russia, China, North Korea or Afghanistan.

President Trump has sent National Security Advisor H. R. McMaster to Afghanistan as part of a U.S. strategy in that key country. Afghanistan is America’s longest-standing commitment in the post-9/11 struggle against terrorism and remains a frontline state in that effort. In February, the commanding U.S. general in Afghanistan testified that some twenty terrorist groups are operating in the Afghanistan-Pakistan region, the “highest concentration” in the world.

Despite massive investments by the United States and its allies, Afghanistan still faces a vigorous Taliban insurgency with safe havens in neighboring Pakistan, as well as serious governance and development challenges. The Trump administration is wisely taking a careful look at the U.S. approach, including the request by the U.S. commander to add troops. The proposals that emerge from the review merit close attention, given the human and financial treasure that America has invested and the national interest in ensuring that Afghanistan is not again a sanctuary for transnational extremists, as it was when Al Qaeda planned the 9/11 attacks there.

The policy review will draw lessons from the United States’ fifteen year involvement. National Security Advisor McMaster, among others, served as part of the U.S. surge in Afghanistan. In particular, he worked to counter corruption in the country.

Many of us who worked on Afghanistan during these years will look for an integrated multiyear strategy that presents a sustainable way forward for ending the conflict and providing stability to a country that has suffered so much. With others, we have argued that the United States should maintain its presence and support for the Afghan government and against the Taliban with the objective of forging an enduring partnership.

While recognizing the serious obstacles, we cite America’s strong interest in preventing Afghanistan from again becoming a space where international terrorists can flourish and threaten others. Some will question the wisdom of continuing U.S. involvement, given past promises of success, the costs of a longer commitment, the performance of our Afghan allies, continuing Pakistani support for the Taliban and the slim prospects for a solution. But whatever side of the argument one is on, it makes great sense to review U.S. involvement, strategy and programs, and to develop clear objectives and a vision for the path forward.

If the United States is to continue with a sizable military presence and military-civilian assistance effort, the approach should be comprehensive. It should include a sustained commitment, avoiding the agonizing annual reviews of past years. It should take account of U.S. errors and successes, especially the surge in military and civilian presence and aid during the Obama administration. The surge and subsequent drawdown have been criticized for setting unrealistic timetables to end the U.S. presence, for not effectively countering pernicious Afghan corruption, for not building Afghan security forces with all the capabilities needed to hold the Taliban in check, and for not having the right programs, staffing patterns or policies to produce more capable Afghan partners. A widely heard criticism is that the United States ended up fighting the war one year at a time, rather than with a long-term plan.

Yet, in 2017, the United States still has a strong coalition of international partners who are willing to provide military and development assistance. The U.S.-Afghan Strategic Partnership Agreement and Bilateral Security Agreement provide a foundation for multiyear commitments. The government of President Ashraf Ghani is much more committed to reform and good governance than the previous Karzai government, and both he and his governing partner, Chief Executive Officer Abdullah Abdullah, seem genuinely committed to a positive partnership with the United States and others in the international coalition, especially on counterterrorism. In general, Afghan security forces have been willing to fight hard against the Taliban. Also, the international situation is more dangerous than ever, with ISIS and other extremists looking for places to operate.

The Trump administration can present a strategy that plans for its four-year term, and beyond, to help strengthen Afghan partners militarily, politically and economically, and to assure that the Taliban does not effectively win on the battlefield. A key task is to help the Afghan government strengthen its legitimacy in the eyes of a worried and pessimistic population, by reducing corruption, creating economic opportunity and fighting effectively against its foes. Improved government performance will also sustain the support from international partners. A credible anticorruption plan is essential. Additionally, the U.S. strategy will need to explain how to engage regional actors, especially Pakistan, to diminish support for the Taliban and other extremists.

A clear but limited set of U.S. objectives, whose progress can be measured and reassessed along the way, will help win congressional and public support for sustained funding and a longer-term commitment.

Many American-Afghanistan watchers stress the need to find paths to a political solution that ends the fighting and brings elements of the Taliban and the government together. Few argue that a purely military defeat of the Taliban is possible; however, and the how and when of any negotiated solution, or the potential U.S. role in that process, remain to be defined. Most observers do not expect the Taliban to be ready to engage in any negotiations, if they think they are gaining inside Afghanistan.

Thinking of four pillars is helpful in considering the U.S. policy review:

The United States and its allies withdrew the bulk of their troops from Afghanistan between 2012 and 2015. Despite the Taliban gains in territory controlled over the past two years, the Afghan Security Forces have done fairly credibly, suffering many casualties and holding major cities and population areas. But the tough battles and the Taliban’s expanded presence underscored the need for continued support to strengthen the Afghan Security Forces’ leadership, mobility, air power, logistics and tactical training. They highlighted the need for more effective efforts to root out corruption and political patronage, which undermine effectiveness and reforms. Recognizing this reality, in President Obama in 2016 decided to retain 8,400 U.S. troops in the country; he also approved U.S. air support for the Afghan government forces against the Taliban.

In February 2017, the commander of U.S. and NATO forces in Afghanistan, Gen. “Mick” Nicholson, asked for several thousand additional U.S. troops. He explained that the additional forces were needed to expand the training and advising effort in order to cover higher level headquarters below the corps level. The United States would continue to provide air, intelligence and Special Forces support to the Afghans and to act against terrorist groups. Some believe that more U.S. troops and more active involvement in the fighting will be needed. In addition to recommending troop presence and mix, the policy review can also profitably look at the effectiveness of ongoing military and security programs, with an eye to shifting to those that are producing good results and eliminating others. A basic question, already asked by Senators John McCain and Lindsey Graham, is what is needed to end the stalemate in the fighting and reverse the Taliban’s momentum. That question links directly to what to do about the safe havens that the Taliban and associated groups have enjoy in Pakistan. Afghan officials, and many Americans, argue that these safe havens and Pakistani support made it very difficult to deliver the serious blows that would lead the Taliban to seek a negotiated solution. Given the last year, and the fighting that continued through the normal winter lull, most observers expect a very tough 2017 fighting season.

Afghan president Ashraf Ghani is much more serious about improving government performance and the justice system than was his predecessor, Hamid Karzai. Ghani is renowned for his detailed efforts to redesign government programs, launch anticorruption efforts and oversee government work, with the aim of making them more efficient and effective. While Ghani is criticized by some for micromanagement, the big challenges have come from factional fighting between Ghani and his former rival and now government chief executive, Abdullah Abdullah. The struggles between them and their teams have slowed appointments, reforms and government decision making significantly over the last two years. Abdullah and Ghani and their teams seem to be working better together recently, but there is still much work to do: filling key jobs with good appointees, improving government performance and fighting corruption among senior and local officials. There will be hard work ahead to maintain unity in the government coalition. The government faces a range of political challenges from dealing with defiance from Vice President Abdul Rashid Dostum, a former warlord whose bodyguards are charged with sodomizing an opponent, to resolving conflicts with the parliament over a path to promised parliamentary elections and Afghanistan’s 2019 presidential contest, for example. The United States can help by providing quiet advice, mediation and keeping the focus on the reform agenda. U.S. capacity-building programs will remain valuable. The basic political challenge is for the Afghan government to be seen by the Afghan people as increasingly legitimate and effective. The means delivering more security, jobs and public services, while reducing corruption, and having a credible way forward on elections.