Strikes without Strategy in Syria, Years in the Making 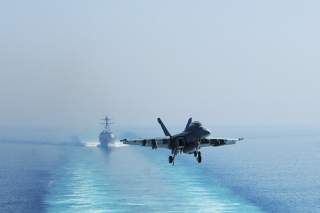 President Donald Trump’s targeted airstrikes with France and the United Kingdom against the Assad regime’s chemical-weapons capabilities came a little more than a week after Trump made clear his intention to wash his hands of the conflict by withdrawing all U.S. troops from northeastern Syria.

The strikes were aimed at deterring the Syrian government’s appalling use of chemical weapons against its own people. But the action over the weekend did not constitute a strategy to halt the fighting in Syria and alleviate the humanitarian catastrophe produced by the country’s civil war.

The lack of a clear and realistic U.S. policy on Syria didn’t start with Trump. Since the start of Syria’s civil war in March 2011, America has lacked the will and capacity to shape the trajectory of events in Syria in any meaningful way. In the first three years of the conflict, the Obama administration tried to stay above the fray and limit America’s direct involvement.

In the opening months of his presidency, Trump signaled a possible grand counterterrorism bargain with Assad’s patron in Moscow. But his unilateral action a year ago of launching cruise missiles against a Syrian air base to retaliate for a sarin nerve agent attack that left dozens dead was an early sign of the limits on the possibilities of U.S.-Russia cooperation in Syria.

The center of gravity for Trump’s approach to Syria has centered on the anti-Islamic State campaign. Raqqa fell in October 2017, creating important questions regarding the future of America’s role in Syria after the fall of the Islamic State.

The Trump administration has yet to answer key questions about the next phase of U.S. policy in Syria. Trump’s first Secretary of State, Rex Tillerson, attempted to provide some answers in a January 2018 speech, outlining a board set of goals to be pursued by a small but enduring American military presence on the ground in northeastern Syria. Gen. Joseph Votel, the head of U.S. Central Command, echoed Tillerson in remarks to reporters who accompanied him on a February visit to liberated Raqqa.

But at the end of March, President Trump overruled the course of action favored by his foreign-policy team, telling an Ohio rally that American troops would be “coming out of Syria very soon,” and the United States would “let the other people take care of it now.” Though Trump apparently wanted to pull American forces out of Syria within forty-eight hours, Secretary of Defense Jim Mattis reportedly convinced the president to give the military another six months to eliminate the remainder of the Islamic State.

This weekend’s strike lays bare the incoherence that defines the Trump administration’s approach to Syria. In the span of less than four months, the United States went from an enduring military presence in northeastern Syria to withdrawal in six months to strikes against the Assad regime.

Syria’s civil war is emblematic of the problems plaguing today’s Middle East—a deadly internal conflict between multiple factions has given rise to many terrorist networks and served as a vortex that has sucked in regional and global powers. For years, the United States has tried to contain the damage and limit risks to its interests by Syria’s conflict—without success. The flood of millions of refugees into Europe, combined with the reemergence of the politics of fear in America after the rise of the Islamic State, have had a direct impact on America.

Resolving Syria’s conflict is in America’s national interest—and this will require an integrated approach that elevates diplomacy, and not just military moves. One night of strikes doesn’t constitute a strategy to halt Syria’s civil war and stabilize the country. The military strikes this weekend should serve as a wakeup call on the need for a new debate about America’s overall role in resolving the conflict in Syria.