Striking a Deal with Russia on Spheres of Influence 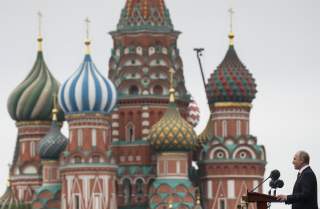 Trump administration officials and their hawkish domestic allies sound increasingly strident alarm bells about foreign meddling in Venezuela’s internal political turmoil. They contend that Russia, China, Cuba, and Hezbollah are especially active in supporting leftist president Nicolas Maduro’s beleaguered government. Indeed, some U.S. analysts insist that without outside backing, especially by Russia and Cuba, pro-democracy opposition forces likely would have forced him to relinquish power already. When anti-government demonstrations erupted in Caracas on April 30, Secretary of State Mike Pompeo stated that Maduro had been ready to board a plane to fly to exile in Havana but changed his mind at Russia’s urging.

U.S. leaders appear to exaggerate the extent of Moscow’s meddling. Given Maduro’s uncompromising behavior throughout the most recent demonstrations, the notion that he was ready to flee the country absent Russian intervention seems far-fetched. The loyalty of Venezuela’s military has not yet wavered, and he continues to draw support from left-wing citizens’ militias. Those factors have been more relevant to his continued grip on power than Russian (or any other foreign) support.

Nevertheless, Russia definitely has meddled in Venezuela’s political turbulence. Moscow is a major financial prop for Maduro’s government, and the Kremlin has provided tangible military backing as well. In December 2018, Russia deployed two nuclear-capable bombers to Venezuela, and in March 2019, it sent some 200 military personnel to help Caracas refurbish its air defense system. Several hundred Russian mercenaries also appear to be operating in the country to assist Maduro’s security forces deal with regime opponents. Maduro’s foreign minister fanned the flames of Washington’s worry and anger by stating that Russia’s military involvement in his country might even increase.

The United States has insisted on maintaining a sphere of influence in the Western Hemisphere since the proclamation of the Monroe Doctrine in the 1820s. Russia’s policy in Venezuela represents a direct challenge to that doctrine, and U.S. leaders should make it clear that a continuation of such behavior will have a markedly negative effect on bilateral relations. Cuba has been a foreign political and military client in the hemisphere for decades, precisely the situation the Monroe Doctrine aimed to prevent. The United States has no right or justification to dictate Venezuela’s internal governance, but it would be unwise to tolerate the establishment of a second hostile foreign client state.

The Trump administration should insist that Russia respect the Monroe Doctrine and confine its Venezuelan ties to normal diplomatic and economic relations. At the same time, it is essential for U.S. officials to acknowledge that the United States and its NATO allies have shown contempt for Russia’s sphere of influence—and even its core security zone—in Eastern Europe.

Washington’s roster of provocations is long and damaging. With strong U.S. encouragement, NATO’s membership has crept inexorably eastward, reaching the western border of the Russian Federation and even incorporating the three Baltic republics, which had been constituent parts of both Czarist Russia and the Soviet Union. Beginning with George W. Bush’s administration, Washington has pressed NATO to expand still farther and offer membership to both Georgia and Ukraine. The United States and its allies have greatly increased the number and scope of their military deployments and war games in Eastern Europe and the Black Sea. Barack Obama’s administration interfered blatantly in Ukraine’s internal political affairs to unseat a democratically elected, pro-Russian government and replace it with a pro-Western regime in 2014. Since then, Washington has made Ukraine a de facto military ally, training and conducting joint military exercises with Ukrainian forces and concluding two significant arms sales to Kiev.

Moscow’s meddling in Venezuela likely is at least partially designed to be payback for Washington’s intrusive, provocative policies in Eastern Europe. The ingredients, therefore, exist for a sensible agreement embodying needed restraint on both sides. U.S. leaders should inform the Russian government that they are willing to end their quest to bring Ukraine and Georgia into NATO and to cease all military connections with Kiev and Tbilisi—including weapons sales and joint exercises. Washington also should offer to end its “rotational” deployment of troops, planes, and warships in Eastern Europe and the Black Sea. In other words, Washington would be willing to respect a Russian sphere of influence in that region.

As a tradeoff, the Trump administration should insist that Moscow greatly dilute its involvement in Venezuela and Cuba; and the administration should suggest that it end a growing flirtation with Nicaragua’s leftist government. That retrenchment especially would require Russia to reverse its growing military presence anywhere in the Western Hemisphere.

Such an offer requires greater realism on the part of U.S. policymakers and political leaders. Spheres of influence have always played a major role in international affairs, and despite assertions by prominent members of the American foreign policy community, they still do. All great powers seek to enforce their writ in their immediate neighborhood, and the avoidance of needless conflict requires a decent respect for that reality. Recent U.S. administrations have violated that important principle, and their behavior is producing retaliation and a spike in international tensions. The Trump administration can reverse that trend by insisting on Russia’s respect for the Monroe Doctrine while spurning the advice of hawks who think the United States can and should assert dominance in Ukraine and other portions of Eastern Europe. U.S. leaders would be wise to propose such a deal sooner rather later.