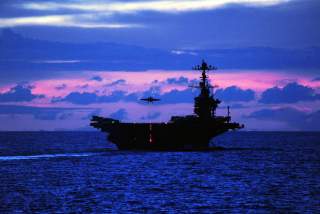 The first day of a new job is always rough. But pity incoming National Security Advisor John Bolton, who will probably not even have time to unpack. His first crisis has arrived before he has. Dozens of civilians are dead east of Damascus, apparently killed in a chlorine gas attack by the Assad regime. Footage circulating on social media shows the dead packed in a basement shelter: men, women, children, all lifeless.

Bolton’s new boss tweeted Sunday that there was a “big price to pay” and suggested that Barack Obama should have snuffed out “Animal Assad” during a similar crisis five years ago. The Joint Chiefs of Staff are reportedly set to present Trump with military options against Syria. We may see a rerun of the cruise missile strike last year on a Syrian air base. If this happens, few will shed tears for Assad’s men. But a strike would be a double error for the United States. First, it would not address a vital U.S. national security interest. Our military strength can deter similar attacks on America. Second, a strike would erode the rule of law here at home. Under the Constitution, the president does not have the power to initiate war. The Syria threat is not so serious that we should break our laws to address it.

War and death in a far corner of the world do not automatically threaten vital U.S. national interests. Our “detached and distant situation,” to borrow a phrase from George Washington, means that we rarely face direct threats to our territory, to our fundamental prosperity, or to the independence and openness of our government. We have no strong neighbors that are about to invade us. Threats to the United States tend to be indirect: for example, Al Qaeda, under the protection of the Taliban, plotted attacks against America from Afghanistan. In the early Cold War, the Soviet Union had the potential to sweep into war-ravaged Western Europe. Had it dominated that region’s vast population and economic potential, it could have challenged America on the global stage and even projected serious power into our hemisphere.

Bashar al-Assad can barely dominate the Damascus suburbs, much less amass the power for a direct attack on America. Russia and Iran have gained influence in Syria by backing Assad. But they, too, are unlikely to turn Syria into a dagger at America’s throat. Divided and in ruins, Syria is a liability to whomever owns it. That won’t change for some time. Any threat to America from Syria, and from gas attacks in Syria, has to be very indirect.

Those who want to strike Assad again argue that there is an international norm against the use of chemical weapons and that this norm makes it less likely that chemical weapons will be used against Americans. If “the international community,” which in this context means “the U.S. military,” looks the other way at chemical attacks, chemical weapons will come to be used more frequently in war. They then may eventually be used against American troops or even American civilians. Sohrab Ahmari made this argument succinctly in Commentary on Sunday morning: “Intervention is necessary to deter use of illegal weapons. If [Assad] gets away with it, as he has (mainly owing to Obama’s pusillanimity), other nasty regimes will conclude that they can, too. That will eventually threaten Western security.” Ahmari brands this “Boltonian realism.”

Yet realism weakens the case that strikes on Syria are necessary to nip in the bud a long chain of events that ends in tangible harm to America. Realists share Bolton and Ahmari’s dim estimation of human nature. States act on self-interest and do not follow the niceties favored by those Bolton scornfully calls the “High-Minded.” Bad, norm-breaking behavior is likely if it yields benefits. As the ur-realist Thucydides put it, "the strong do what they can and the weak suffer what they must." Assad knows we, too, are strong. His self-interest and our strength intersect to deter him from using his chemical weapons against us, lest he face our vengeance. Fear of retaliation, not norms, kept the Germans, Italians, and Japanese—all enthusiastic gassers of weaker foes—from using the weapons against the Western Allies in World War II. Recent incidents outside Syria—in which advanced chemical weapons were used for assassination—were conducted by states whose nuclear deterrents make retaliation hard and whose targets had little power projection capability. The United States need only speak softly and continue to carry its big stick to deter chemical strikes on itself.

But suppose I’m wrong and Ahmari is right: even our mighty military and nuclear arsenal can’t stop the long chain of events that ends in Americans being gassed. Or suppose, as others argue, that the norm against chemical weapons is vital for protecting foreign civilians, and that America is the world’s policeman, prosecutor, judge, and jury, and must thus enforce the norm. There’s still a second danger: to rule of law here in America.

If Trump repeats the pattern of last year’s strike, he’ll launch the attack on his own authority, citing his power under Article II of the Constitution. It’s still not clear precisely what reasoning the administration’s lawyers were using to define the scope of that power. But it is clear that he was acting far beyond the limits the Founders envisioned when they divided the power to make war between the executive (as commander in chief of the armed forces) and the legislature (which, under Article I, Section 8, Clause 11 of the Constitution, has the sole power to declare war). Legal scholar Andrew Kent has argued that “under the best reading of the original understanding of constitutional war powers, President Trump's strike on Syria was patently unconstitutional.” Kent had written that

A vast array of members of the Founding generation opined without dissent that the Constitution had [...] empowered Congress alone to decide whether to initiate foreign war. . . . Major figures whose views about this issue are essentially beyond dispute include George Washington, James Madison, Alexander Hamilton, John Marshall, James Wilson, Thomas Jefferson, John Adams, William Paterson, James Monroe, Pierce Butler, James Iredell, Samuel Chase, Henry Knox, and Charles Pinckney. On the other hand, I am not aware of a single instance in which a prominent member of the Founding generation expressed the view that the Constitution authorized the president to decide whether to initiate a foreign war.

It is noteworthy that even Hamilton, who craved a strong executive, is counted among the presidential war opponents. Yet today’s presidents, left and right alike, have initiated wars without consulting Congress. Even the permissive War Powers Resolution has been ignored—most notably by the Obama administration, which declined to seek Congressional approval to continue the air war in Libya.

Why would the Founders restrict the president’s war power? The same realistic assessment of human nature that shapes the rest of the Constitution. John Jay, in Federalist No. 4, warned that monarchs wage wars that serve no national interest out of “thirst for military glory, revenge for personal affronts, ambition, or private compacts to aggrandize or support their particular families or partisans.” Or, as Kent puts it:

A president might have troubling foreign ties or be corrupted by an adversary; be driven by ego, a desire for glory, madness, short-sightedness, or stupidity; be influenced by pernicious political advisers; or be motivated to attempt solve domestic political troubles by ginning up a foreign war in order to benefit from the ‘rally round the flag’ effect.

A president might also have bad judgment or, surrounded by federal officials that never have to face voters to be held to account for their performance, fail to adequately consider the general interest. All this led the Founders to defy the European monarchic model and separate the power to initiate war from the power to conduct war. And, more deeply, America was founded on the notion of human fallibility: that nobody is perfect, that even virtuous, well-educated, and public-spirited leaders could err gravely or succumb to power’s temptations. The Founders therefore set power against power, and placed war in the hands of legislators who faced the possibility of swift rebuke from the voters. They did not entrust the war power to presidents, who stood to gain popularity and power from wars.

This system does not guarantee a perfect foreign policy. Congress authorized force against Iraq in 2002. But it does make mistakes less likely: it forces the president to convince hundreds of legislators that war is indeed in the national interest. One man’s error is not enough to lead the nation to disaster.

Of course, in the event of an attack on the United States itself, such as a foreign invasion (a real possibility in the founding era), it would be foolish to wait for Congress to take a vote before reacting. There may even be cases in which a preemptive war (meaning war to repel an imminent attack, not an Iraq-style war to prevent a possible future threat) would be necessary.