A Strong U.S.-India Partnership Is in Our Strategic Interest 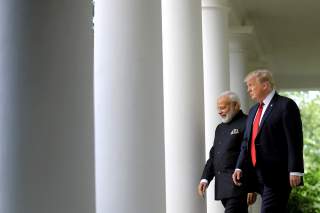 Congress has created numerous rules regarding how America goes about establishing strategic relationships. Unfortunately, those rules don’t work well in the world as it exists in the twenty-first century.

Over many decades, the United States has established a two-tier system. In the top tier are our formal allies. Alliances were—and to a large extent remain—the coin of the realm for U.S. statecraft and security relationships.

No worries. George Washington’s ghost won’t be haunting us because of that. When Washington warned against entering into “entangling alliances,” he wasn’t enunciating an immutable principle of foreign policy. He was settling an argument: that the young republic should not insert itself into the endless squabbling between France and England by aiding one side or the other. That made sense then.

But when America became a global power, with global interests and global responsibilities, strategic needs changed. After World War II, the United States and allies needed an alliance structure to deal with long-term concerns. Persistent concerns require persistent relationships, both to demonstrate the willingness to take joint action and to assure access to facilities and forces that enable the U.S. to project power around the world.

These post-war alliances included both broad regional coalitions like NATO and bilateral defense treaties like those with Japan and South Korea.

Even after the Cold War ended traditional alliances demonstrated enormous worth. After the fall of the Wall, many predicted that that the U.S. move to more ad hoc arrangements, relying on situational “coalitions of the willing” to deal with most problems. That turned out not to be the case. America wound up relying mostly on its enduring allies, and they depended on us. That holds true today.

To strengthen the bonds of alliance structures, Congress peppered the U.S. code with clauses that give our allies preferential treatment on everything from sharing sensitive military technologies, to intelligence cooperation to undertaking joint military operations.

The second category of strategic relationships is friends. These lack the “I’ll be there for you” guarantee granted to treaty partners. But among friends, there was a recognition of common interests that didn’t need to be cemented with a formal defense relationship. In the case of some friendships, there were also outstanding strategic issues that would have presented at least as many problems for forming an alliance as would have solved by it. No matter; the level of defense cooperation attained with friends was adequate. These arrangements still serve American interests well. The U.S.-Sweden defense relationship is a good example.

The U.S.-India relationship doesn’t fit well into either the category of friend or ally.

What is driving strategic convergence between Washington and Delhi is Beijing. But the United states and India don’t need a treaty alliance. It is not about deferring to Indian sensibilities that may cling to the country’s nonalignment legacy, or crave strategic autonomy, or envision India as independent balancer in South Asia. No. There just isn’t a need for a defensive alliance to deal with China.

No one is trying to deter or contain China. What is required is a regional structure to manage China’s disruptive influence in the region. Beijing is now attempting to rewrite international norms: threatening freedom of the commons, intimidating smaller regional powers and spreading corrupt practices. What Washington and Delhi have in common is not the desire to counter China per se, but a desire to foster peace and prosperity in the Indo-Pacific—and to deal with Beijing when it undermines that effort.

Further, India has issues in the region which are largely its own concern. They don’t want or need an American security commitment to address them. Indeed, embroiling the Americans in issues like Kashmir makes things worse, not better.

On the other hand, the United States and India need to be more than just friends. The kinds of activities the two must conduct—such as undertaking joint patrols, developing shared maritime situational and anti-submarine warfare defensive operations—require them to be able to seamlessly integrate military action, upgrade intelligence cooperation and ensure interoperable military capabilities. They are nowhere near that level of shared operational capability. Joint exercises, for example, require ad hoc practices and “work-arounds” so that the two can demonstrate they can work together. They can’t just “plug in and play.”

What’s needed is a common security framework that doesn’t require a formal alliance and does allow for common operational capabilities. At the same time, it must also let India “unplug” to deal with its own regional security concerns that aren’t part of the joint effort to craft an enduring approach to Indo-Pacific challenges. The kind of relationship required really doesn’t exist.

Moreover, it cannot exist as long as Congress maintains the laws and policies it established to make our alliance structures more effective. Because neither the United States nor India want to establish a bilateral defense alliance, the strategic relationship is hamstrung. We are letting form determine function.

Taking it Up a Notch

The United States needs to craft a unique defense relationship with India—one that delivers the benefits of allied status without the formal architecture that goes with it. Establishing rock-solid bilateral relations with key strategic partners in the region—Japan, Australia and India—is foundational to building a sustainable regional order.

It also makes sense because it is likely something India is willing to do. With the U.S. strategy looking for friends and allies to step up and do more in the common defense, the Indians appear more than willing to answer the call. Delhi recognizes that the success of the Indo-Pacific project requires an engaged America. Elevating India as a unique American partner will allow them to more quickly and forcefully fill that stabilizing role.

Finally, this initiative is not really a one-off. It is just one punch in an effort to staple together the right kind of cover for the world’s major democracies.

Giving this new kind of relationship a name is less important than making it a reality. Part of the effort will require fresh thinking in U.S. policies. Part will require changes in law. Most of all it will require leadership. The right framework to map out a strategy is the two plus two dialogue—the convening of the Indian and U.S. foreign and defense ministries.