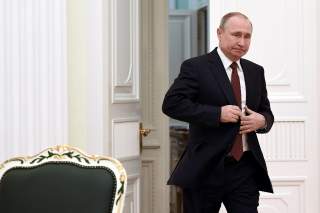 Given the poisonous relationship between Washington and Moscow, chances that the two great powers might face off in a military confrontation are growing.

In recent days, the United States has expelled dozens of Russian diplomats—who are alleged to be undercover intelligence officers—in retaliation for Moscow’s alleged attack on GRU defector Sergei Skripal and his daughter, Yulia, in the United Kingdom. The Kremlin has promised retribution as relations between Russia and the United States sink to their lowest point since the Cold War.

“I don’t think many of us would question that we do face a new Cold War,” Dimitri Simes, Center for the National Interest president and chief executive officer, said during a lunchtime panel on March 26. “Now a new Cold War might be different in many respects than the old one. First of all, a very different balance of forces. Second, the absence of an attractive international ideology on the Russian side. Third, obviously, Russia is much more exposed to the West than during the original Cold War, but also, fewer rules and, I think, perhaps more emotions on both sides and increasingly hostile emotions on both sides.”

The Possibility of a Conflict

Simes, who recently returned from a trip to Russia, said that while the Kremlin is held in low regard by Washington, those feeling are mirrored in Moscow. Indeed, tensions between the two nuclear-armed great powers are so high that analysts are openly wondering if there could be some sort of military confrontation between Washington and Moscow. Asked by Simes to grade the likelihood of any sort of potential military clash (though not necessarily nuclear) in Syria or elsewhere on a scale of one to ten—where ten would mean that a conflict was all but certain—a panel of experts on Russia concluded that there is a serious possibility of a military confrontation between Washington and Moscow.

“I’ll go with a six,” George Beebe, director of intelligence and national security studies at the Center for the National Interest, told a lunchtime audience. “I think it’s more likely than not, but far from certain. That being said, I think a six—when you’re talking about a military clash between the world’s two most capable nuclear powers—is an unacceptably high level of risk.”

Michael Kofman, a research scientist at the Center for Naval Analyses who was also speaking at the panel at the Center for the National Interest, agreed that there is a genuine risk of a military confrontation between Russia and the United States. Kofman put the risk level at six or seven. “On a long enough timeline we’re going to get there,” Kofman said.

If there was some sort of crisis that involved both the United States and Russia, the danger of a confrontation is very high. “During a crisis or standoff, I think it’s exceedingly likely,” Kofman said. “These confrontations don’t happen as a bolt out of the blue, first you have to have a crisis and then people make choices and those choices eventually lead to people shooting at each other.”

Paul Saunders, executive director of the Center for the National Interest, who spoke alongside Beebe and Kofman, said that he did not believe that a military confrontation with Russia was inevitable. Saunders put the risk level at roughly five, but added that given the stakes of a potential nuclear confrontation, that is far too dangerous for his tastes. “I don’t think it’s more likely than not, but for me, I think it’s still an unacceptable risk,” Saunders said.

Putin is in a Strong Position

While many in Washington believe that Russia would fold if the United States stood up to the Kremlin, the recent Russian presidential elections on March 18 seem to show that Russian president Vladimir Putin has a much stronger mandate than many Western observers might have expected. As Beebe—the Central Intelligence Agency’s former head of Russia analysis—noted, Putin performed much better in the Russian elections than analysts expected.

“On political power, this is really a good news story for Putin,” Beebe said. “He essentially achieved that 70/70 sweet spot that the Kremlin had forecast as its goal going into the election. Seventy percent turnout and Putin winning 70 percent of that vote. The actual event turned out to be he got a little over 67 percent turnout and little over 76 percent of voters cast in their ballots for Putin.”

Simes noted that Putin performed better than expected with parts of the Russian electorate where he traditionally has not fared well, such as in Moscow and with Russians living abroad. Part of the reason that Putin did so well was because of the alleged Russian attack on Skripal, since the Russian population generally does not believe that their government was involved.

Indeed, Russian liberals faired exceedingly poorly in the elections at least in part because of the “rally around the flag” effect, Beebe said. Beebe noted that part of the issue is that neither the United States or Britain has presented concrete evidence that Russia conducted the attack. The information that is publicly available is cause for a high degree of suspicion that Russia was behind the attack, Beebe said, however, it is not evidence in and of itself. The idea that Russia is under siege by hostile foreign powers greatly contributed to high voter turnout in the Russian elections and for far greater support for Putin himself. “I was at a postelection party for journalists where a lot of opposition people, candidates, their surrogates were present, and they were all saying, ‘We lost a lot of voters during the last days before the election because of this British incident,’” Simes said.

Moreover, Western attempts to cultivate Russia’s youth have proven to be a complete failure. Saunders, who is a former State Department official, noted that part of America’s goals in Russia during the 1990s was to win over the youth and create an attraction to the West. However, that has not happened. Russian youth grew up in a period of relative prosperity and at a time when Putin started to restore Russia’s stature abroad. “They’re among the people who are most supportive of Putin,” Saunders said. “That’s in no small part because during their short lifetimes, it’s been a period of, generally speaking, prosperity and of a greater and greater role for Russia in international affairs.”

Beebe noted that the Russian presidential elections are not about selecting a new president—that Putin would win was a foregone conclusion—it was, instead, a gauge on the Russian president’s political power. While Russian elections are not free and fair, the level of falsification is an indication as to how popular the government is with the populace. “This was by Russian standards relatively free if not really fair. It was a tilted election, but the voting was pretty free,” Beebe said. “This tells everybody the results were about right. This is a good sign for Putin in terms of his political power.”

With his political power secure, Putin can turn his attention to rebuilding Russia as a great power. The lesson that Putin and the Kremlin elite have drawn from the collapse of the Soviet Union and the chaos of the 1990s when Moscow was weak is that Russia must be strong. “[Putin] is saying Russia needs to be strong,” Beebe said. “If I were to boil this down to one sentence, it would be ‘the strong do what they will and the weak suffer what they must.’”

The problem for Russia, Beebe said, is that there is tension between its various goals. To have a strong economy, the Kremlin must relax its grip on society, which weakens the power of the state, Beebe said. But a strong military requires a strong economy, which means that Russia will have to make those reforms. And a strong military is a part of Russia’s self-image as a great power. “That’s a balancing that he’s going to have to perform and there is no easy way of doing that,” Beebe said.

Given Russia’s circumstances, those competing factors are pushing Putin towards a more nationalistic stance that emphasizes military power, Beebe said. That in turn is driving Russia to be more confrontational. Thus, in Kofman’s view, if there is some sort of crisis that develops where Washington and Moscow are facing off against each other, the Russians are not willing to meekly stand aside and defer to the United States. While Russia was weak in the immediate aftermath of the collapse of the Soviet Union, those days are long gone. Today’s Russia, with its modernized military, is far more confident than it was during the 1990s and is willing and eager to push back against the United States.

Kofman noted that in recent weeks, Russian chief of the general staff Gen. Valery Gerasimov warned the United States that Moscow would retaliate if its forces are attacked by American forces in Syria. As Kofman notes, unlike most Russian political figures, Gerasimov does not make idle threats and he strictly follows guidance issued to him by Russian president Vladimir Putin. “When the Russian chief of the general staff says something, you have to listen because someone told him to say it,” Kofman said.