The Submarine Row Marks the Dawn of the Franco-British Rivalry 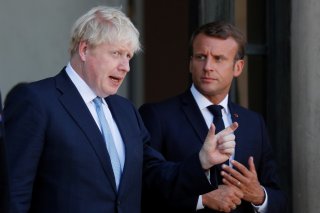 “It’s a stab in the back. We had established a trusting relationship with Australia, and this trust was betrayed,” French Foreign Affairs Minister Jean-Yves Le Drian said upon the abrupt cancellation of the $66 billion submarine deal with Australia. Furious, Paris reciprocated by recalling its ambassadors from Canberra and Washington—a first in the history of the long alliance between France and the United States, dating back to 1778.

Some argue that the decision to favor the U.S.-made nuclear submarines was partially due to the perception that French-made diesel-powered submarines on long transits from Australia to potential conflict zones in the Asian region would have to spend time traveling on the surface (where they are at their most vulnerable) using diesel engines while they recharge their batteries. Some claim the cost blowouts, schedule slippages, and concerns over commitments to use local contractors led Australia’s Morrison government to finally pull the plug on the French submarine deal. While those can be contributing factors in the “submarine saga,” a very important factor is being omitted: London’s aspiration, in the aftermath of Brexit, to ascend in the Great Power Competition that is rapidly reshaping the global geopolitical order. After all, British prime minister Boris Johnson promoted Britain’s departure from the European Union as an opportunity for the country to strike more global strategic deals unrestrained by the EU.

To this end, the UK is trying to achieve three goals: preventing a European power from rising as a challenger to London, preventing Russia from dominating the Eastern Mediterranean, and preventing China from controlling the Indo-Pacific trade routes that are vital for Britain’s economic prosperity. Not surprisingly, those three pillars are intertwined and involve London’s power struggle with Paris.

The Franco-British rivalry is most visible in the eastern Mediterranean. London has taken every possible step to undermine Paris’ perceived national interest, particularly in Libya, thus weakening France’s prospects of becoming a dominant power in the European Union in the UK’s absence. In this regard, the British have sided with Turkey, France’s archrival in Libya and the eastern Mediterranean. Subsequently, France did not hesitate to irk the British by pursuing a policy of rapprochement with the Russians in Libya.

London’s aide in the EU, after Brexit, is Malta. Malta, one of the two British Commonwealth and European Union members (the other being Cyprus), was an intercessor in the Brexit negotiations and has been a port of call for Royal Navy patrols in transit to and from the Gulf, the Horn of Africa, and the Indo-Pacific. In May 2020, it was Malta that vetoed the funding for Operation IRINI, the EU naval mission tasked to enforce an arms embargo in Libya, particularly those arms that Turkey intended to deliver to its proxy, the Government of the National Accord (GNA), and the archrival of the French-backed Libyan warlord Khalifa Haftar.

Malta was also among the five countries, with the others being Germany, Spain, Italy, and Hungary, who blocked a Franco-Greek sponsored EU resolution that would have imposed an arms embargo on Turkey due to Ankara’s policies on Cyprus and drilling in the eastern Mediterranean. Furthermore, in an effort to counter Turkey’s growing influence in the region, France has stood by the Cypriot Greeks, and in August 2020 went so far as to send naval vessels off the coast of Cyprus as well as deploy Rafale fighters jets to the Greek island of Crete. Yet, Johnson called Greek prime minister Kyriakos Mitsotakis and urged him to pursue a more diplomatic solution, indirectly supporting Turkey’s “gunboat diplomacy.” Whereas France sees an ascendant Turkey in Syria as a threat and has condemned Turkey’s Syria incursions, London threw its support behind Ankara, citing Turkey’s right to self-defense. While Macron hosted the representatives of the Syrian Kurdish People’s Protection Units (YPG) at the Elysee Palace, drawing Turkey’s ire, London stated that the YPG was part of the Kurdish Workers’ Party (PKK), which is considered to be a terrorist organization by many NATO members.

Even though French interests were hurt in Libya, Syria, and the South Caucasus, London continued to supply Turkish drones with necessary technology at a time when American and Canadian firms imposed an arms embargo on Turkey. Most notably, in May 2020, Turkish drones and air defense systems helped the Turkish-backed GNA government retake nearly all of western Libya from Haftar’s forces.

The Franco-British rivalry also flared up in the English Channel. In May 2021, Johnson didn’t hesitate to dispatch two Royal Navy patrol boats to protect Jersey (the largest channel island) from a feared blockade by French fishing vessels in an escalation of a dispute over post-Brexit access to waters around the Channel Islands. France retaliated by blocking a post-Brexit financial services deal between the EU and the UK until Johnson’s government granted fishermen fair access to British waters. French government spokesman Gabriel Attal did not deny that Paris was holding up the deal for the financial sector as a lever in the fishing dispute.

By leaving the European Union, London has severed the “restraining yokes,” allowing its leap into the great power competition that is rapidly heating up. For the UK, this competition entails containing the rise of any continental European power, most notably France. It appears that London is sabotaging France’s moves wherever it can. Soaring Turco-British relations, for instance, not only facilitate London’s ability to project power deep into the Caucasus and Central Asia, but also helps the British undermine France’s perceived interests that greatly contradict those of the Turks.

It should be no surprise that Australia’s decision to ditch the submarine deal with France came hours after the declaration that the United States, the UK, and Australia formed a security pact (AUKUS) to counter China in the Pacific. Mark Leonard, director of the European Council on Foreign Relations, said, “the submarine snub is a symptom of a toxic turn British-French relations have taken in the last few years.” Increasingly rendered impotent in the eastern Mediterranean, Sub-Saharan Africa, and the Sahel, Paris is likely going to take steps to restore its wounded pride, with severe consequences. The French have already been questioning the purpose of being a part of NATO, and the submarine issue has given them a concrete reason to revise France’s place in the Transatlantic alliance, just like Paris did in 1966. Having already cozied up with Russia in the eastern Mediterranean, Paris should be expected to increase its intimacy with Moscow, which is more than enough to damage the foundations of NATO, raising concerns among Poland, the Baltic states, Ukraine, and Georgia. Given his slumping performance against his political rival, populist Marine Le Pen, who has close ties with Vladimir Putin, Emmanuel Macron may resort to taking drastic steps in foreign policy.

Europe is increasingly resembling what it was before 1939. Whether AUKUS is going to trigger a wider conflict in Eurasia has yet to be seen.