Sun Yat-sen and the Future of Taiwanese 'Independence' 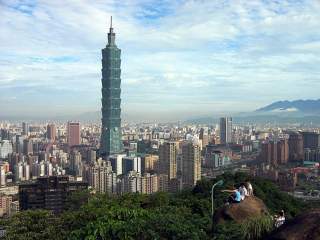 In a meeting with legislators of the National People’s Congress on Saturday, Chinese President Xi Jinping warned that Beijing would resolutely contain “‘Taiwan independence' secessionist activities in any form." He added that preventing such Taiwanese independence is “our solemn commitment and responsibility to history and the people."

In Taiwan, however, a central historical figure connecting the island to the mainland could soon be ousted.

In late February, a Democratic Progressive Party (DPP) legislator in Taiwan’s Legislative Yuan proposed an amendment with the support of twenty other lawmakers that would require the removal of portraits of Sun Yat-sen from government buildings and schools. The proposal may presage future efforts within the DPP-majority legislature to remove Chinese historical and cultural influences on the island, which could complicate cross-Strait relations under incoming DPP president Tsai Ing-wen.

Sun Yat-sen’s presence in Taiwan is ubiquitous. Roads and schools are named after him, and his image is displayed on the New Taiwan Dollar’s 100 note. He is commemorated as the “founding father” of the Republic of China, whose government was transplanted to Taiwan in 1949 following Chiang Kai-shek’s retreat during the war with the Communists. Per a 1954 law, Sun’s portrait must hang inside all public buildings; a giant one looms over the interior of Taiwan’s legislature.

The stated purpose to remove the portraits is to bring about a “deepening of the democratic spirit” in Taiwan. Many staunch pro-independence advocates view Sun as a vestige of authoritarian KMT rule who was forced upon the local Taiwanese by Chiang Kai-shek. Indeed, Taiwan was under Japanese colonial rule when Sun helped to establish the Republic of China on the mainland in 1912. (Sun died in 1925.)

Meanwhile, acting KMT chair Huang Min-hui described the proposed amendment as part of an effort to “eliminate” the Republic of China and stoke the island’s deeply rooted ethnic divisions. Strong opposition by KMT members in the legislature was sufficient to return the bill to committee on February 26 instead of move it ahead to a vote.

Beijing esteems Sun Yat-sen as the “forerunner” of the 1949 Communist revolution and as a “great national hero” linking together both sides of the Taiwan Strait. This year, it will hold a series of events throughout the country to celebrate the 150th anniversary of Sun’s birth as part of its “United Front” ideological campaign vis-à-vis Taiwan, which involves appeals to shared history.

Comments by a Taiwan Affairs Office spokesman in response to the proposed amendment indicate that Beijing remains highly sensitive to so-called “de-Sincization” initiatives on the island. He called for citizens on both sides of the Strait to be on “high alert” against such actions, since they could harm the peaceful development of cross-Strait ties. In Beijing’s view, efforts to assert a separate Taiwanese identity—a process it has previously labeled “creeping independence”—could make eventual unification even more difficult.

For president-elect Tsai Ing-wen, the amendment proposal comes during a delicate time as she seeks to develop a cross-Strait policy that will ensure stability after her May 20 inauguration. During a meeting with DPP heavyweights last week, she obliquely criticized the timing of the move, saying the DPP’s legislative caucus needs to have “strategic thinking” and “more discussion” on politically sensitive issues. Undoubtedly, Tsai wants DPP legislators to prioritize efforts to reinvigorate Taiwan’s stagnant economy and avoid needlessly provoking the KMT and China, especially once she assumes power.

Over the past eight years, outgoing KMT president Ma Ying-jeou and the hitherto KMT-controlled legislature eschewed initiatives to assert Taiwanese identity, in sharp contrast with Ma’s DPP predecessor Chen Shui-bian (2000-2008). In fact, Ma has received criticism for his embrace of “Chinese” culture such as his promotion of Confucianism and efforts to revise the content and language of history textbooks towards a “pro-China” viewpoint.

The DPP now enjoys a 68-seat majority in Taiwan’s 113-seat legislature following the January 16 election, and it is likely that the party’s “deep green” pro-independence legislators will push for “de-Sincization” policies in the coming years that will unnerve Beijing. How the Tsai Ing-wen administration handles these tricky issues while ensuring party unity and cross-Strait stability is something to watch.

Yet, the bigger problem for China is that a growing majority of people in Taiwan identify as “Taiwanese” instead of “Chinese,” despite robust cross-Strait engagement and the avoidance of “de-Sincization” policies during the Ma Ying-jeou era. Beijing has its work cut out for itself in winning over the hearts and minds of the Taiwanese people, beyond simply preventing the removal of portraits of Sun Yat-sen.