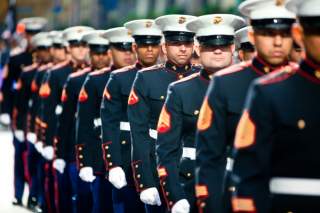 If this election season has taught us anything, it’s that America is a nation divided. But one area where we can find common ground is the commitment to the men and women who serve our country in uniform and their families. Preserving efforts to advance not only veterans, but military families and spouses, is a platform both parties should be seeking to build upon in the next election.

Veteran-hiring initiatives have received considerable bipartisan consensus, with support from both public and private partnerships. The White House Joining Forces initiative, the Veterans Jobs Mission and Veterans on Wall Street, among others, have been proactively promoting veteran employment through hiring commitments. The Chamber of Commerce has set up nationwide hiring fairs, while the Department of Labor Veterans’ Employment and Training Office generates best practices to help prepare and support veterans in civilian life.

Hiring is not the only area that deserves attention. Military families and spouses are the foundation upon which successful transition is built. We need to focus our efforts on more than just veterans, taking into account how critical the family unit is for success. The challenges and economic sacrifices that accompany military service, particularly for spouses, are enormous.

One key issue often overlooked is the employment of spouses. Championing the economic opportunities and successes of military spouses is central to fulfilling our obligation to those who serve, and to recruiting and retaining a competitive all-volunteer force. Military families are the backbone of the all-volunteer force and a critical component of veteran success. Investing in spouses and families is also beneficial to the economy, and creates a more robust network of support for all those who serve. Additionally, a recent study by Blue Star Families found that the societal cost of military spouse unemployment and underemployment cost Americans between $710 million and $1.07 billion.

Military service encompasses patriotism and sacrifice beyond the service member themselves. There are myriad opportunities to improve economic outcomes for military families in addition to adding well-educated and highly motivated talent to companies across the United States. Working toward fixing spouse unemployment and underemployment will likely make great strides in both retention of current service members and ensuring wellness of veterans after service.

When looking holistically at veteran success and wellness, we must not underestimate the value of spousal employment in providing financial stability through transition. Numerous difficulties arise during a service member’s transition from active duty to veteran status. Many problems, such as the imperative to quickly find employment, can be mitigated by a spouse who is salaried. This allows service members to focus more of their time interviewing and finding the right job as opposed to any job.

Similarly, education is an opportunity that many veterans must forgo due to fiscal challenges, a sacrifice which could be alleviated by prioritizing military spouse employment. Long-term financial and employment prospects are buoyed by higher education, and having a gainfully employed spouse may allow veterans the flexibility to pursue these degrees. Similarly, the current GI Bill transferability to family members allows for spouses and children to pursue higher education, also benefitting the military family.

The continuation of the Joining Forces initiatives should look to broaden efforts toward military spouses, moving beyond hiring to areas of impact such as certifications across state lines, standardization of education from school to school for military children and further preferential hiring efforts for military spouses into federal employment. Similarly, outreach efforts to companies who allow for remote-work opportunities could be mutually beneficial, as many spouses are currently underemployed in the few—if any—roles they are able to find.

Efforts to ensure the success of our veterans and military families are fundamental to the American identity—adding economic value while fulfilling a moral obligation to those who have served. Amidst the bipartisan bickering and upcoming political transition it is important that the initiatives so thoughtfully pioneered by Joining Forces are not lost, but rather used as a platform for the next administration to build upon.

Providing a level of continuity and focus to Joining Forces efforts will be critical to ensuring that we as a nation don’t drop the ball on our moral obligation to the military community. It’s also important to recognize that serving our veterans and military families well is an issue set more varied than hiring initiatives, which have received the most publicity. Veteran and military family wellness is best considered holistically, with veteran employment representing only one aspect of overall success. From an economic perspective, it is also important to consider how veterans perform economically after hiring, as well as whether they are being placed in roles commensurate with their worth and experience. More broadly, the role of military spouses and families play an incomparable role in success both during and after service. The Joining Forces initiative pioneered by Michelle Obama and Jill Biden has been a key component of advancing positive outcomes for veterans and military families and should be formalized and continued under the next administration.

Amy Schafer is a Research Assistant with the Military, Veterans and Society Program at the Center for a New American Security (CNAS).