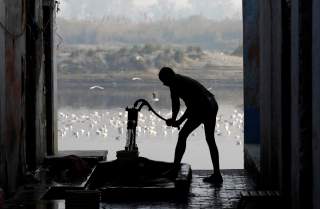 Water scarcity and dependence on a few sources have kept conflicts between regions and states within India alive and fuming. Counting on a neighboring state to release the flow of water through its dams to irrigate its drying agricultural lands has led to inter-state water disputes that have lasted three decades. The proposal of connecting rivers has been a hotly discussed topic and remains to be only a topic for discussion with little or no concrete action. Given this environment, water technology could act as a catalyst for peace.

Chief ministers of Indian states have expressed interest in partnering with Israel. Yogi Adithyanath of Uttar Pradesh Israeli has said that “Israel help can increase the availability of water in Bundelkhand region as both have similar geographical conditions.” The chief minister of the southern state of Andhra Pradesh, Jaganmohan Reddy, recently toured the desalination plant at Hadera and the chief minister of Tamil Nadu, Edappadi K. Palaniswami, will have the opportunity to bring back some fixes for the people and the economy of Chennai and Tamil Nadu during his planned trip to Israel later in the month. With over thirty-two water projects in thirteen states in India, Israel’s cooperation with India has evolved from diplomats shaking hands and bromance of leaders, to farmers sharing their farming techniques.

The “elixir of life” requires a multipronged approach. Addressing the crisis could solve many of the world's other perils; farmer suicides, decades-long conflicts and disputes and finally save our dying planet. Even for the skeptics of climate change, this story of two of earth’s oldest civilizations, and in particular, the civilization with the most fertile lands learning lessons on water management from the civilization with the aridest, warrants a pause.

Akhil Ramesh is a consultant based out of New York. He has conducted extensive research on the political and economic environments of the Asia Pacific, with a particular focus on South Asia. He has worked for premier risk consulting and nonprofits in New York City.

Shenhav Ruttner is a master’s of international affairs student at Columbia University who specializes in international security policy and international conflict resolution. She is a lieutenant-commander (res.) in the Israeli Navy.