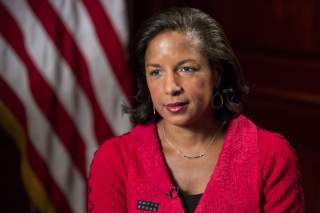 Former National Security Advisor Susan Rice thinks the next Democratic president should ask Congress about its national security concerns, a stunning reversal from when she pushed former President Barack Obama to attack Libya without the permission of Congress.

Rice, the UN Ambassador who oversaw Obama’s invasion of Libya before becoming national security advisor, was instrumental in pushing Obama towards a military intervention against the Libyan government in 2011 without consulting Congress. Trump administration spokesman Hogan Gidley has used the Libyan intervention to justify the assassination of Iran’s Maj. Gen. Qassim Suleimani without congressional approval, which brought America and Iran to the brink of an undeclared war.

Rice spoke alongside a group of high-powered White House alumni at a Wednesday conference on “The First Hundred Days” of a post-Trump presidency. The former Obama administration heavyweights proposed a host of tweaks to fix a policy process that has been ignored by the famously freewheeling President Donald Trump. But their most significant proposal was giving Congress back its constitutional role in questions of war and peace.

Former White House Chief of Staff Denis McDonough summed up the mood at the Center for American Progress conference: The Republicans screw stuff up, and we have to fix it.

Rice said that the next administration will have to show “real respect for the other branches of government, almost overcompensating” for the sake of the “long-term health of our democracy.”

She added that congressional Democrats were in a “pent-up fury” about being sidelined on the recent escalation with Iran, and the next administration would have to be “very committed” to “resisting the temptation” to take advantage of norms eroded under Trump to push its own policies.

Other high-ranking Obama alumni agreed on the need to go through Congress, even though their own administration had been reluctant to ask the legislative branch to authorize the use of military force.

“We should recognize that Congress has congressional responsibilities under Article I of the Constitution,” McDonough said. “There’s a lot of really interesting experience and voices on Capitol Hill.”

Article I of the Constitution gives Congress the power to make laws, sign treaties, and declare war.  Obama used his powers as commander-in-chief under Article II to justify the intervention in Libya. He did not ask Congress to authorize the military campaign against the Islamic State (ISIS) in Iraq and Syria, either, instead of leaning on decades-old laws.

Michele Flournoy, former Under Secretary of Defense for Policy, agreed that working with Congress would make solving problems easier, and said that sanctions and military force alone do not make a comprehensive foreign policy. Instead, she proposed a “whole-of-government, smart approach” to terrorism, the rise of China, and climate change.

Flournoy had particularly ambitious goals for dealing with China, including a drive to bulk up America’s competitive power at home, investments to offset the socioeconomic side-effects of automation and free trade, and a “strategic dialogue” with Chinese leaders to “take some really catastrophic things off the table.”

The Center for American Progress has been called America’s “leading liberal think tank” and a “training ground” for the next generation of liberal staffers. The think-tank plans to release a one-hundred-day plan based on Wednesday’s conference, whose speakers were open about their power to set the tone for the next Democratic administration.

“Now is the time to build intellectual capital,” Flournoy said. “You’re inheriting from Day One a set of operations with Americans in harm’s way.”

Rice added that it is necessary to start “to think about personnel even before there’s a transition.”

Most of her specific proposals had to do with restoring old norms to the executive branch. Rice said that she would “ban foreign policy by tweet,” restore regular press briefings, and embark on an “early and aggressive initiative to restore capacity as well as morale to the State Department.”

“The institutions and the processes and the norms that are generated in that building are important,” McDonough said, referring to the White House. “An agreement with a President, irrespective of his party, was considered binding.”

Their overall vision of the world was a return to the pre-Trump world order, even if it would take a long time to get there.

“It’s hard to overstate the damage that’s been done to alliances, to our standing in the world, McDonough said. Rice added that these alliances, including the North Atlantic Treaty Organization, will take “more than the work of a single administration to repair.”

But the mood in the room was not revenge-minded, despite the palpable frustration with the Trump administration. One member of the audience asked whether there has to be “some sort of bloodletting over what has happened over the past three years.”

“I see no benefit from engaging in retribution,” Rice said. “We can win with grace.”

Editor's note: this article has been updated to clarify that Ms. Rice was UN Ambassador in 2011.