Svetlana Tikhanovskaya: ‘With Biden’s Help We Will Prevail’ 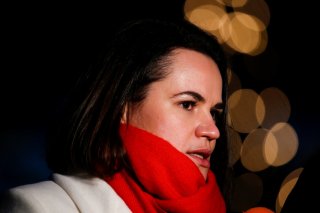 A fresh crackdown is taking place in Belarus. Security forces there have raided the homes of independent journalists and detained three Radio Free Europe/Radio Liberty employees. Meanwhile, a court has sentenced ten students and a teacher to jail for violating public order. Overall, the regime has imprisoned over 550 individuals on similar grounds.

It was against this tenebrous background that I spoke with Svetlana Tikhanovskaya, the elegantly dressed thirty-nine-year-old leader of the opposition in Belarus, on her first visit to Washington, DC. Tikhanovskaya, who selects her words deliberately, made it clear that she is looking to the Biden administration to bolster the beleaguered opposition and democratize Belarus, stating “With Biden’s help we will prevail.”

But will they? Ever since the August demonstrations that rocked the regime, President Alexander Lukashenko has steadily ratcheted up the pressure on the opposition to his continued rule, including forcing down a commercial jet in June to apprehend the blogger Roman Protasevich. The opposition blogger has since been paraded on TV to testify to his remorse for his previous criticisms. She views snatching Protasevich as an “emotional” move by an enraged Lukashenko. “He’s ready,” she said, “to do anything.” But according to Tikhanovskaya, the forced confession backfired. Rather than “demoralizing” the opposition, she stated, the pressure exerted on Protasevich helped reinvigorate it.

Throughout our conversation at the Willard Hotel, Tikhanovskaya maintained that Lukashenko’s rule is imperiled. While Belarus is going through “hell,” she painted a portrait of a society that has begun to organize itself against the Minsk government in a variety of ways. She observed that even “ancient” forms of communication such as printing presses producing samizdat for remote villages have been revived. At the same time, she pointed to plans for a nationwide strike centered on state-owned enterprises that would be organized by the workers themselves. From Poland and Ukraine, workers who have fled Belarus apparently continue to communicate with their former colleagues. When this strike would actually occur, however, is unclear.

Tikhanovskaya makes no secret of her contempt for Lukashenko, referring to him as “a complete puppet.” She is careful to depict him as a burden for the Kremlin as well. Her message is that Belarus and Russia have always had close ties, a situation that would not change with the ouster of Lukashenko. “We are not looking for enemies,” Tikhanovskaya says. She wants a “dialogue” with Russia but is also convinced that President Vladimir Putin does not have a real strategy for the future of Belarus. When I asked her if she expected to meet with Putin in the future, she responded, “I don’t know.”

It seems clear that the opposition is pinning its hopes on sanctions as well as further ostracism of Lukashenko. Tikhanovskaya will push for more draconian sanctions on the government this week, and the European Union is considering a fifth round of sanctions. The question will be whether increased sanctions cement rather than dissolve the bond between Moscow and Minsk. Tikhanovskaya also expressed the hope for a Marshall Plan for Belarus. At a moment when President Joe Biden is preoccupied with extricating America from Afghanistan and rebuilding domestic infrastructure, it seems like a tall order indeed. Tikhanovskaya argues that what Belarus needs above all is “a good manager” who can rebuild the country. “I’m not ready to participate in new elections,” she says. She could serve instead as “a moral authority.”

She avers that Lukashenko’s rule “can’t last long.” A recent Chatham House study indicates that over half of Belarusians believe that Lukashenko should go now or before the end of 2021. A scant 10 percent support a fresh term in 2025. But as the latest round of arrests in Belarus indicate, the pillar of the regime—the security services—remain loyal. During her visit, Tikhanovskaya will have to demonstrate that hers is more than a moral crusade. For now, Lukashenko doesn’t appear to be going anywhere. Quite the contrary.

Jacob Heilbrunn is the editor of the National Interest. He tweets @jacobheilbrunn.