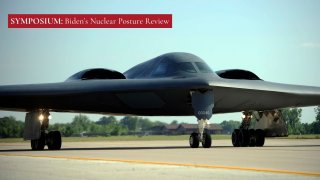 During the 2020 presidential campaign, Joe Biden expressed a desire to redefine U.S. nuclear strategy by reducing the role of nuclear weapons and seeking new arms control arrangements with adversaries like Russia and China. However, once in office, his administration sustained his predecessor’s spending plans for U.S. nuclear modernization—including the development of new nuclear weapons—and now finds itself beset by warnings of increasingly aggressive Russian and Chinese nuclear behavior, rising modernization costs, and slow-burning crises with Iran and North Korea.

The Biden administration’s commencement of its Nuclear Posture Review (NPR)—the United States’ fifth since the end of the Cold War—provides it with a unique opportunity to change the trajectory of U.S. nuclear policy. Yet it remains unclear if the administration will seize it and implement the “bold decisions” that its allies in Congress have called for. To help answer what Biden should do, the National Interest has organized a symposium on the administration’s NPR, U.S. nuclear policy, and arms control more broadly. We asked a variety of scholars the following questions: “Should Joe Biden seize the opportunity of his administration’s Nuclear Posture Review to redefine the role of nuclear weapons in U.S. security planning? How should U.S. policy change to address the proliferation threats that the United States is facing?”

Biden’s Nuclear Moment Has Arrived
Rabia Akhtar, Director of the Centre for Security, Strategy and Policy Research at the University of Lahore and Nonresident Senior Fellow at the Atlantic Council South Asia Center, explains why the Biden administration needs to curtail the advancement of new nuclear weapons and advanced hypersonic vehicle technologies.

Will the Nuclear Posture Review Reveal the Biden Doctrine?
Francesca Giovannini, Executive Director of the Project on Managing the Atom at Harvard University’s Belfer Center for Science and International Affairs, posits that the Biden administration should use a lens of defensive realism to shape its Nuclear Posture Review and return the United States to a classical nuclear deterrence posture.

Roll Back Nuclear Modernization Programs, Mr. President
William D. Hartung, Director of the Arms and Security Program at the Center for International Policy, argues that President Joe Biden should fulfill his campaign pledge to reduce the role of nuclear weapons in U.S. security policy by rethinking the nuclear triad and how and when nuclear weapons might be launched.

Nuclear Modernization Remains Important for Arms Control
Mark Massa, Assistant Director in the Forward Defense practice at the Scowcroft Center for Strategy and Security at the Atlantic Council, explains why the Biden administration should maintain the bipartisan nuclear consensus by pairing a robust nuclear deterrent with arms control and risk-reduction measures.

Biden Must Continue the Bipartisan Nuclear Consensus
Anthony Ruggiero, Senior Fellow at the Foundation for Defense of Democracies, asserts that President Joe Biden should continue the bipartisan nuclear consensus and reject calls to unilaterally disarm and reduce funding for nuclear modernization.

Reducing the Role of Nuclear Weapons Will Make America Safer
Lynn Rusten, Vice President of the Global Nuclear Policy Program at the Nuclear Threat Initiative, supports a Nuclear Posture Review that adopts a sole-purpose policy, reviews the nuclear modernization effort, reduces the risk of nuclear use, and defines objectives for U.S. nuclear relations with Russia and China.

The Last Thing the Middle East Needs Is a Nuclear Arms Race
Barbara Slavin, Director of the Future of Iran Initiative at the Atlantic Council, discusses Iranian actions and the state of its developing nuclear program since President Donald Trump pulled out of the Joint Comprehensive Plan of Action.