Syria Could Be Washington's Next Big Foreign Policy Failure 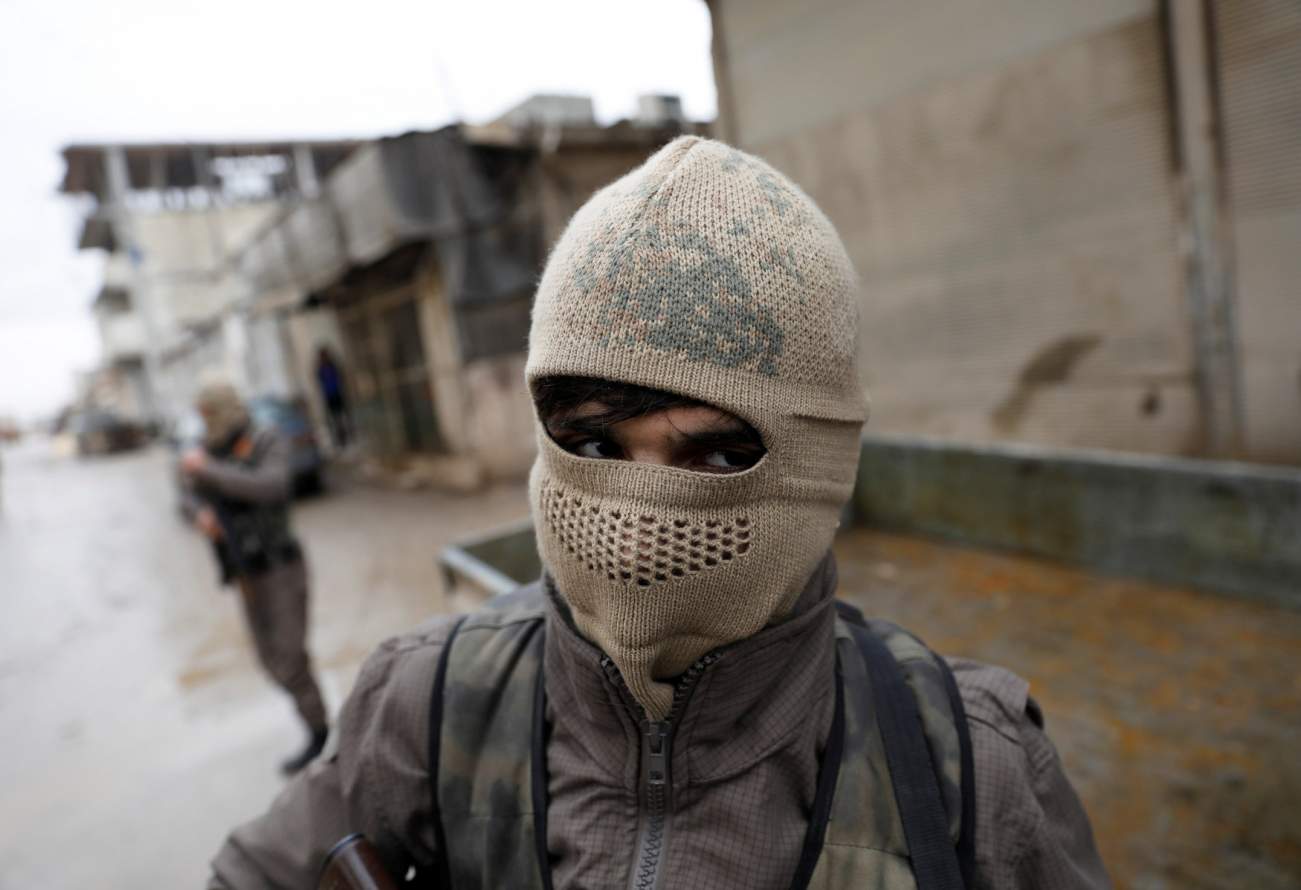 Tillerson also made the unexceptional observation that Assad’s regime violates human rights. But then, so do many U.S. allies in the Middle East, such as Saudi Arabia, Turkey, Bahrain and Egypt. Nor has the administration indicated how a continuing presence in north Syria will help oust Assad, which continues to enjoy the backing of Iran and Russia.

Reviving support for much-diminished “moderate” insurgents would be hopeless. Russia likely would respond as it did before, accelerating its support for Damascus. The administration’s strategy is simply wishful thinking: “Because of its influence on the Syrian regime, Russia must join the international community and support this way forward [meaning Assad’s departure] to end the conflict in Syria.” Tillerson probably believes in the Tooth Fairy and Great Pumpkin as well.

Tillerson complained that “for many years, Syria under Bashar al-Assad has been a client state of Iran.” But as he recognized, the two governments were allied before the start of the civil war. Tillerson warned that to disengage “would provide Iran the opportunity to further strengthen its position in Syria” and spoke of “reducing and expelling malicious Iranian influence from Syria.” How would a small U.S. presence do that? Iran is not only closer geographically, but has much greater interest in Syria and is working with the Damascus government. Tillerson assured Americans that “we’re not there to engage with Iran,” but then what will America do?

Anyway, why does this justify U.S. military involvement? Tillerson cited “continued strategic threats to the U.S.” from Tehran. But Iran will not attack America. The Jewish Institute for National Security of America recently worried that Iran’s gains “threaten to entrench Tehran as the arbiter of postwar Syria and consolidate its control of a ‘land bridge’ connecting Iran directly to Lebanon and Hezbollah.” However, Iran is weak economically, isolated internationally, divided internally and surrounded by enemies. Tehran’s “empire” is more drain than gain: embattled Yemen, divided Iraq, sectarian Lebanon and ravaged Syria. Israel, Turkey, Saudi Arabia and others are fully capable of containing Iran without an American military presence. Military outlays by Saudi Arabia alone vastly outrange those of Tehran.

The administration’s fixation with Iran is encouraging Syrian factions to again play the U.S. Former YPG spokesman Newaf Xelil said “We think that it is surely possible that the Americans will find real reasons to deepen their relationship with the Kurds in a strategic sense,” pointing to Washington’s desire to roll back Iranian influence. The Free Syrian Army’s Mustafa Sejari argued that the president should “turn words into action” and do more to aid “moderate forces.” Yet defending a Kurdish statelet would be a high price to pay for doing little to limit Iran.

Tillerson also contended that “we must persist in Syria to thwart Al Qaeda, which still has a substantial presence and base of operations in northwest Syria.” But in its foolish determination to oust the Assad government, the Obama administration aided Al Qaeda affiliated groups. Moreover, the same administration supported Riyadh’s attack on the Houthi-backed Yemeni government, limiting its operations against the local Al Qaeda in the Arabian Peninsula, perhaps the group’s most threatening off-shoot.

Nor would staying in Syria hamper terrorist operations. To the contrary, American military intervention has created enemies and spawned terrorists around the globe. Anyway, Al Qaeda and other groups can operate almost anywhere, including in the territory of an ally, such as Pakistan. Staying around Syria would change nothing.

Despite Tillerson’s contrary assurances, the administration is embarking upon another interminable nation-building project. Tillerson said “consistent with our values, America has the opportunity to help a people which has suffered greatly. We must give Syrians a chance to return home and rebuild their lives.” But this does not require an American military presence.

Even though Washington doesn’t control the entire nation, the secretary’s ambition is expansive: “Continued U.S. presence to ensure the lasting defeat of ISIS will also help pave the way for legitimate local civil authorities to exercise responsible governance of their liberated areas.” He talked about “stabilization initiatives,” which “consist of essential measures such as clearing unexploded land mines left behind by ISIS, allowing hospitals to reopen, restoring water and electricity services, and getting boys and girls back in school.”

Other officials also forecast a lengthy U.S. presence. Said Col. Ryan Dillon, a military spokesman in Baghdad, “We’re going to be [in Syria] until the political process gains traction”—which could be never. The State Department’s Stanley Brown observed: “Right now the key foreign-policy interest is stabilizing these areas and creating a sense of hope in these communities.” Creating a sense of hope? How long will that take?

However, the fullest measure of the administration’s folly is evident from the potential U.S.-Turkish clash over the Kurds. The situation is complicated, but Turkey’s worries are not baseless. The PYD and YPG are nominally independent from the PKK and the U.S. government insists that it does not back Kurds battling Turkey. However, in Ankara’s view these Kurdish groups are but an “offshoot” of the PKK. And the connections are strong. Newaf Xelil said that “They are not different parts at all, and they cannot be divided in any way, not politically, not economically, not militarily.” Indeed, he added, “For us, it is all Kurdistan and we are now defending Afrin with all we have,” including forces once working with America.

In any case, Washington long showed little concern for the Erdogan government’s perspective. But the administration miscalculated when it announced plans to create, train, and arm what the Pentagon called the Border Security Force to patrol Syria’s border with Turkey. Although Washington backtracked in response to Ankara’s invasion, its reassurances fell short. Turkish foreign minister Mevlut Cavusoglu warned that “We would need to restore trust before we can even discuss a serious issue.” Turkey’s President Erdogan bluntly warned the United States: “don’t get in between us and terrorist organizations, or we will not be responsible for the unwanted consequences.” He added: “Don’t force us to bury in the ground those who are with the terrorist.” Indeed, insisted Erdogan, “Until the last terrorist is neutralized, this operation will continue.”

An unnamed administration official told Washington Post columnist David Ignatius: “Threats to our forces are not something we can accept.” Another one anonymously told the Wall Street Journal: “We’ve been pretty clear that there will be consequences if they move toward Manbij.” But no one seriously imagines the United States going to war with Turkey.

Various proposals have been offered to avoid a confrontation. The United States should broker talks between Kurds and the Turks as well as other insurgents. Washington should promise the Turks not to support independence or expansion for Syrian Kurds or cooperation with the PKK and promise Kurds that Ankara will not intervene militarily into Syria. This requires “quietly persuading” the Turks, wrote Stavridis. Alas, the United States is in no position to give such guarantees. Doing so would permanently entangle the United States in a conflict not its own.

In fact, Washington will abandon the Kurds. When Iraqi Kurdistan went ahead with an independence referendum against Washington’s advice last September, the Trump administration left the territory to its fate: blockade by Iraq, Turkey and Iran, and a military assault by Baghdad. Washington quickly disclaimed any attempt to halt the Turkish advance in Afrin. Nothing more should be expected if Ankara expands its operations to toward Manbij.

Washington has attempted to juggle inconsistent policies throughout the Syrian civil war. Attempting to stay after the Islamic State’s defeat would be even more foolish. Before taking office, President Trump declared, “What we should do is focus on ISIS. We should not be focusing on Syria.” He even warned: “You’re going to end up in World War III over Syria if we listen to Hillary Clinton.”

The best strategy to avoid that possibility is for America to disengage. “What we don’t want to do is leave a mess,” said Gen. Joseph L. Votel, head of U.S. Central Command. That is inevitable, however. The better objective is to avoid being part of the mess that others make. Washington should treat Syria as the human tragedy that it is, not the security priority that it is not. Bring American forces home.

Doug Bandow is a senior fellow at the Cato Institute and a former special assistant to President Ronald Reagan. He is the author of Tripwire: Korea and U.S. Foreign Policy in a Changed World. and coauthor of The Korean Conundrum: America’s Troubled Relations with North and South Korea.